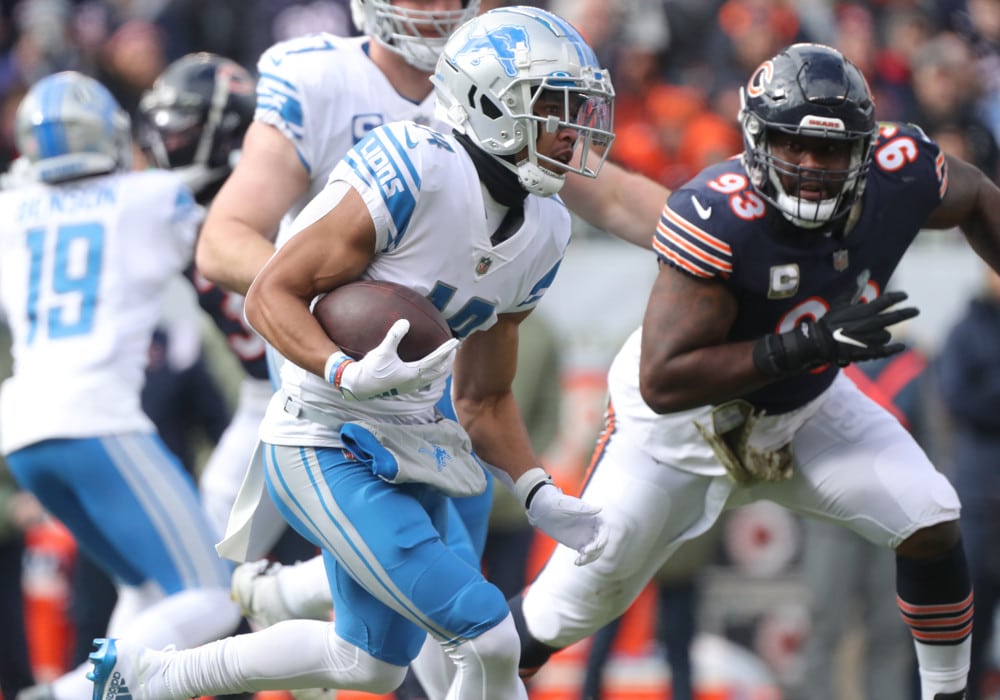 Welcome to the Sports Gambling Podcast Network’s Top 10 NFL Week 14 DFS Stacks article! Each week of the NFL season, I will be breaking down the DraftKings main slate to bring you the top 10 DFS stacks.

I don’t give a hoot if this game picks up a lot of chalk. The game between the Vikings and Lions can’t even help but shoot out. Neither defense is good at defending the pass, nor can the Lions stop the run either. All offensive weapons from this game will be in my player pool, but this simple 2×1 game stack is my ticket to a nasty lineup build.

Amon-Ra St. Brown will feast on this Minnesota secondary and at under $8k, it’s plain stealing. I am very thankful that Justin Jefferson is so expensive this week; maybe more people will hesitate to build around him.

Even Jared Goff is appearing as one of the best QBs on this slate in simulations. Going all in on this divisional clash just sounds fun. It might as well help us win money at DFS.

Have you ever laid your eyes upon a more perfect RB-DST stacking opportunity? I certainly haven’t in a long time. Tony Pollard is one of the best RBs in the NFL at breaking tackles, while the Texan’s defense is the absolute worst at tackling.

Add in the fact that the run-centric Cowboys offense will be going up against the most extreme run-funnel defense and it beckons for us to also consider Ezekiel Elliott on this slate for $400 less.

Nobody needs to be sold on the best defense in fantasy football going against Houston’s anemic offense, who will switch back to original starting QB Davis Mills. Sacks and turnovers aplenty are on the agenda. I feel great about this correlation. It has truly unimaginable upside.

There might not be a more underappreciated stack than Geno Smith with Tyler Lockett, regarding DraftKings salary relative to production. Carolina is in full-on tank mode and their young, talented defense is cracking against good competition.

Seattle is having no trouble at all scoring points, as Smith is having a renaissance season. Their RB room is a skeleton crew, littered with ankle tape and ice baths. They are all banged up, which opens the door for the passing game to continue leading the way. Lockett has been the best-value WR relative to ADP all season.

You can also throw in DK Metcalf at $7,100 if you’re feeling frisky. Carolina is run-heavy and leans on the bruising tactics of D’Onta Foreman. He will be a whale of a challenge for the Seahawk’s defense, who recently were disemboweled by Josh Jacobs to the tune of over 300 scrimmage yards.

Just a couple of target hogs, mixing it up in a divisional showdown game. Stefon Diggs is the one who gives me a bit of pause in this game. He is matched up against the best tandem of cornerbacks in the AFC, Sauce Gardner, and DJ Reed Jr. They held the omnipotent

Justin Jefferson to 45 receiving yards last week. I still trust Josh Allen‘s unique relationship with Diggs on the field and their deadly improv game. There is reason to fade Allen at his cost and especially the mercurial Gabe Davis, who might get blanked in this one.

Garrett Wilson is making a strong case for Offensive Rookie of the Year status, perfectly coinciding with the Jets’ course correction from Zach Wilson to Mike White. White is a better stacking QB with these two receivers should you choose to build that way.

Ah yes, the classic dueling banjos RB faceoff stack. Color me completely unimpressed with the idiotic game plan Kevin Stefansky put forth versus the Houston Texans last week. The Browns would have steamrolled the Texans and made Deshaun Watson‘s corroded debut a lot easier if they had simply stuck the ball in Nick Chubb’s belly a bunch of times against the league’s worst-run defense.

Everyone was stunned when they did the opposite and looked horrendous trying to pass against a great Houston secondary with a QB who hadn’t seen the field in two years. Cincinnati is a middling run defense and very tough to pass upon. Fire up Chubb in a leverage spot at a price that is too high, because the Joe Mixon chalk will be hellacious. Mixon is due to finally clear concussion protocol.

It’s just in time for a date with the puny Cleveland run defense at an egregiously low salary on DraftKings. He’s too good of a value to pass on altogether, so stacking him against a high-upside Browns player like Chubb gives a lineup build a unique flair.

Russell Wilson’s play on the field (and antics off the field) have been incredibly cringeworthy. Denver’s season high for points in a game is a paltry 23. Will the Chiefs take care of business and beat the Broncos on Sunday?

Probably, but there is a lot to like in this game as far as stacking goes. Wilson is dirt cheap and can be paired with Jerry Jeudy for a total of $10.5k.

The Chiefs’ defense isn’t great and an early negative game script could inflate Denver’s offensive stats in our favor. Call it insanity, but adding Kelce to this stack is dripping with leverage on the field in GPP. It’s gross, but most lineups that bink the big tournaments are like that. 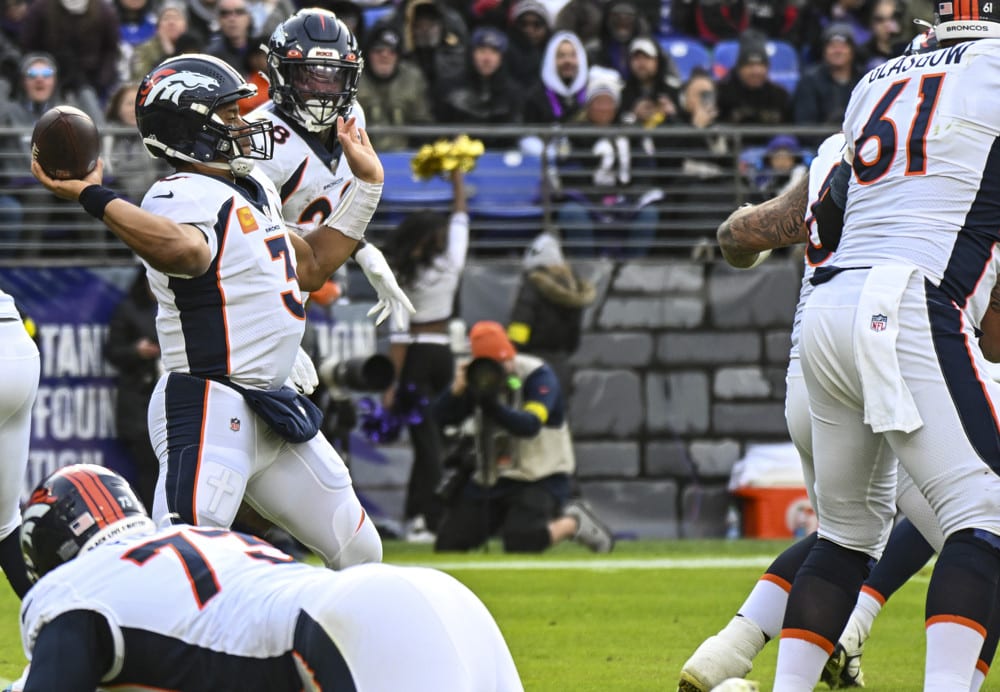 We’re going back to the well and stacking Trevor Lawrence again. The better stacking option last week was Christian Kirk, who helped us cash some solid profits in Week 13. This week, the questionable tag attached to Zay Jones is depressing his projected ownership. This puts him squarely back into the fray as an awesome value play at WR.

Derrick Henry is overdue for a huge game after struggling for nearly a month. He is projected as the most likely RB on the slate to appear in an optimal lineup (RunTheSims). Chigoziem Okonkwo is the exciting rookie TE from Maryland who overtook Austin Hooper last week. He is a big play waiting to happen. He is a lock this week in most of my lineups if Treylon Burks is out, but in the pool regardless.

Skinny stack, with a lethal upside. We saw amazing leverage from the Philly stack last week against the Titans. The Giants are a tougher test and that is reflected in the depressed projected ownership for both Hurts and Brown.

Brown annihilates man coverage, however, and that happens to be a strong tendency with New York under Wink Martindale. With the extreme RB values on this slate, building around a top-tier stack like this will be relatively easy. 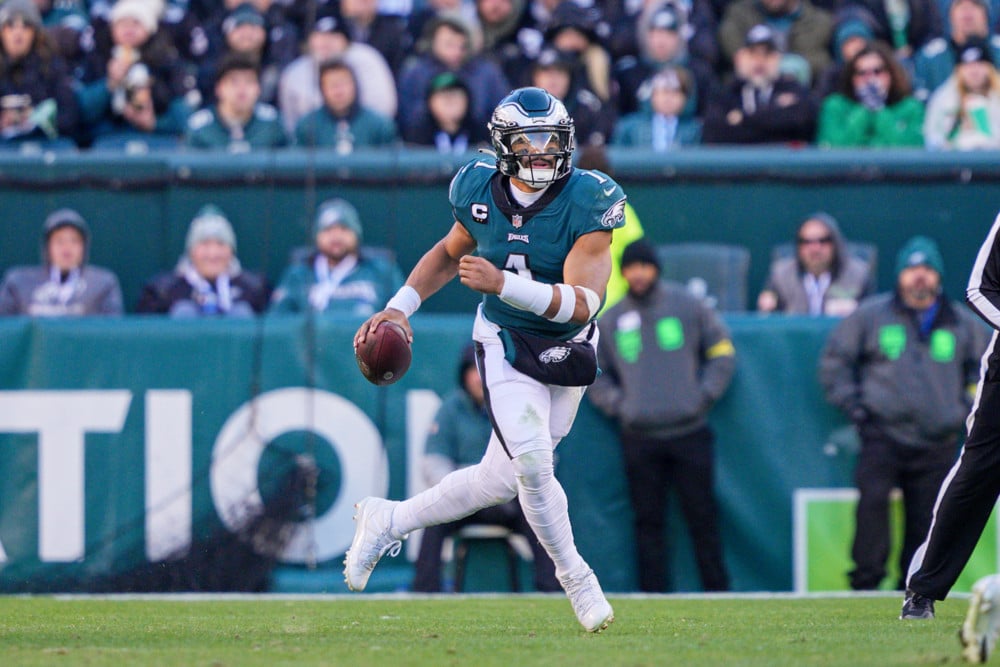 The depressed ownership on Patrick Mahomes is so tantalizing. Nobody actually believes that the Broncos will be able to shut him down, even if their defense is on the strong side.

Despite Travis Kelce’s popularity at a rare salary under $8k, he is still popping up as an optimal play and leveraged against the field. This doesn’t surprise me one bit; the TE position has been a comedy of errors all season.

Dulcich is chalky but plays into the narrative that this game hits the over. Another option from the Denver side is the very unsexy Latavius Murray, who is as likely as any Bronco to find the end zone and is gettable at $5,200.

The “Mega Shootout Game Stack” is a play-off of the first stack mentioned above. The Lions and Vikings played to a 52-point total in Week 3 in Minnesota. Both offenses have continued their success at scoring points and overcoming shoddy defense.

A five-player stack can be accomplished with either QB on this slate and will make for a very high-upside build with oodles of leverage. Is it entirely possible that it bursts into flames? Sure, but it also has a strong chance of hitting big and winning a ton of money.