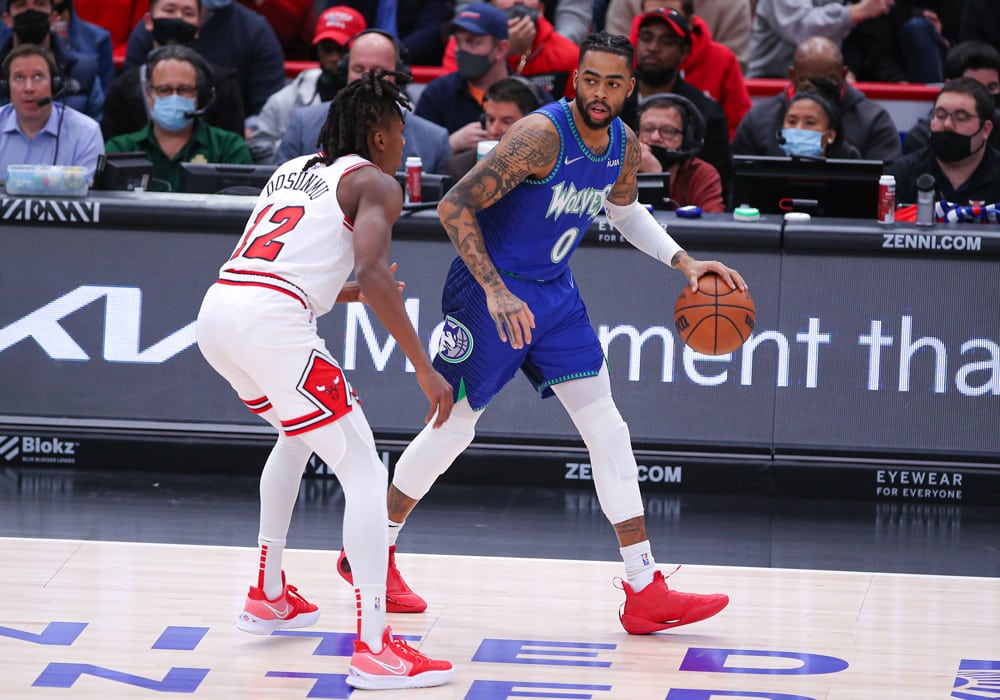 Two-thirds of the NBA is active this Friday for the slate of action. With the season heating up heading into the holidays, it can be hard to keep up with the latest trends and injuries. Lucky for you, we’ve done all the heavy lifting and put together our recommendations for an NBA DFS lineup that we think will put you in the green.

In the three games that Karl-Anthony Town has missed since his injury, Russell has averaged 39.7 fantasy points. Put that against his 32.9 average on the year. A lot of that has come due to the need for more scoring, which Russell has filled. He’s seen a 50% jump in scoring in that same period. Put him up against the Jazz, who rank 22nd in opponent scoring and there’s no reason not to sneak him into your NBA DFS lineup.

There are a lot of reasons I like Kelly Oubre Jr. and have all season. One is that his defensive game provides a nice boost to his stat line. He’s averaging nearly two steals a game, and he’s been picking up the odd block here and there too. He should have that nice floor against the Knicks who are 22nd in the league in turning the ball over. But the reason that puts him over the top for me and makes him a play in my NBA DFS lineup is his uptick on the boards over the last two games.

Scottie Barnes has been an up-and-down commodity for NBA DFS lineups all year. We’ve seen 60+ point performances and we’ve seen 15-point performances. The difference as of late is that he’s really putting more time in on the boards. In his last three games, he’s averaging 12.6 rebounds a game. Put him up against the Magic, who rank 21st in allowing fantasy points to SF – he should eat.

The highest-scoring Magic in fantasy points over the last two games isn’t Paolo Banchero. It is Moritz Wagner. He’s gone for 42.5 and 47.8 respectively in the last two contests. Is there a likelihood of regression? Maybe, but he could lose a third of those points and still be worth rostering in your NBA DFS lineup.

Back-to-back 50+ point fantasy performances are why I’m all over Sabonis as one of my big-ticket items for the night. The guy is spreading out the stat sheet too, which is making him an even safer play. He only notched 11 points against Chicago on Sunday, but still nabbed 51.3 fantasy points thanks to a triple-double that included 17 boards. I’ll take him facing a Cavaliers team that ranks in the bottom third of the league in giving up points to centers.

Bogdanovic may not have a long track record on the season. This will be just his third game of the season since coming back from a knee injury. However, he’s logged 22+ minutes every game, and his stints are getting longer. You aren’t going to find that many minutes for this type of salary anywhere else.

Over his last six games, Steph Curry has sunk 29 three-pointers. Hardaway has 30 in just his last five games. Yet here we are able to add him to our NBA DFS lineup for just over 5k. You can’t pass on a bargain bin play that is this hot right now.

Remember when I told you that you weren’t going to get Bogdanovic-type playing time for a Bogdanovic-type salary… I lied. Joe Harris has started the last four games for the Nets and is putting up over 30 minutes a game. He may cost $200 more than his Hawks foe for the game, but he’s also gone for double-figures in four of his last five. In each of those games, he also went for 25+ fantasy points. In conclusion, he should easily meet his projections.

If you’d like even more information that could help your NBA DFS lineup, be sure to check out the NBA Gambling Podcast. The guys are dropping episodes every week to make you the smartest guy at the bar.