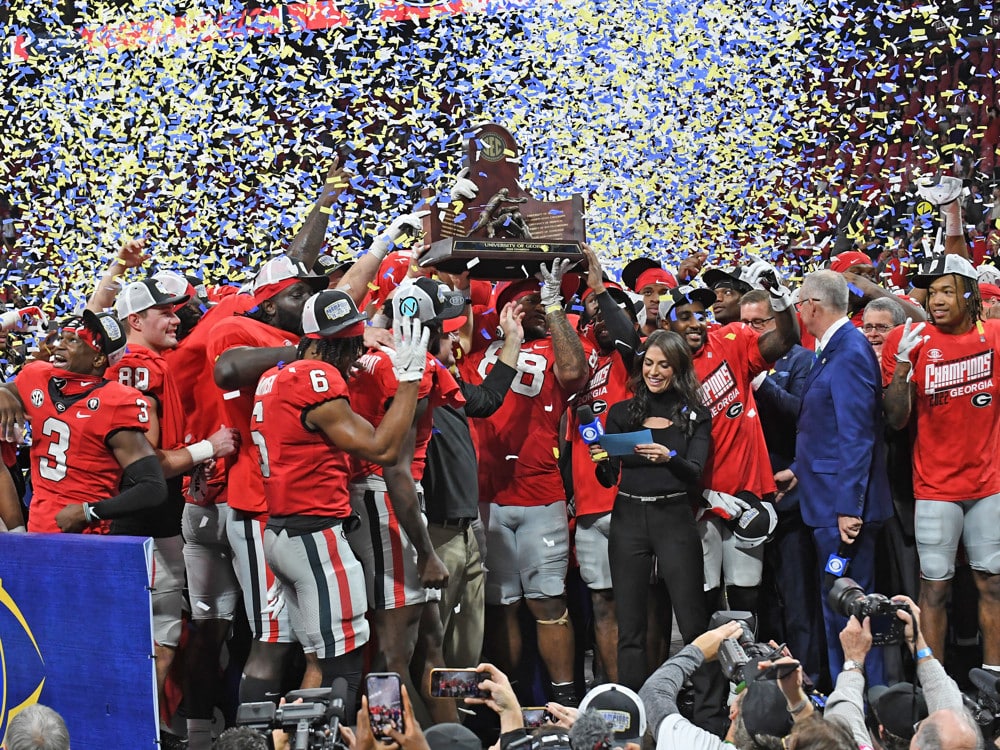 Honestly, so far this year there hasn’t been much to debate about the College Football Playoff Top 25 Rankings. Conference Championship weekend dropped an atomic bomb that many had hoped for. On Friday night former No. 4 USC was routed in the second half of the Pac 12 Championship game by Utah in a 23-point loss. Then Saturday afternoon No. 3 TCU suffered their first loss to Kansas State in overtime of the Big 12 Championship. The tides have turned, and the four CFP teams are Georgia, Michigan, TCU, and Ohio State. Keep reading to view the rest of the Top 25 Rankings and Bowl Game Betting Odds here!

Georgia’s first touchdown of the game was a slow-developing return of a blocked field goal. The floodgates opened as the Bulldogs poured on a total of 50 points in a 50-30 blowout win against LSU. Stetson Bennett threw for 274 yards and four touchdowns but that wasn’t what stood out from the box score. In a game where Jayden Daniels exited with an injury, he and his backup quarterback Garrett Nussmeier combined to pass for 502 yards! Could Ohio State and their prolific passing offense take a page out of the Tigers’ playbook and gash the Bulldogs in the Peach Bowl? Georgia remains number one on the college football playoff top 25 rankings.

Once again Michigan pressed their foot on the gas pedal in the second half to pull away from their opponent. This time it was Purdue being outscored 29-9 in the final 30 minutes of the Big Ten Championship game. Backup running back Donovan Edwards dashed for 185 yards and a touchdown. The Wolverines will battle the Big 12’s runner-up TCU in the Fiesta Bowl from their number two spot on the college football playoff top 25 rankings.

Despite a 95-yard rushing drive by quarterback Max Duggan to tie the game and force overtime, TCU lost their first game of the 2022 season. The close loss convinced the college football playoff committee to keep the Horned Frogs in the field of four via eye test. Digesting tiebreakers in TCU’s resume solidified TCU as the three seed in the college football playoff top 25 rankings. Against the Top 25 TCU was 5-1 this season, better than any other team vying for the three spot.

As I stated in this article last week, Ohio State was in a great position by virtue of being ranked fifth and not having to play a game. USC went and got molliwopped by Utah this weekend. The Trojans lost by 22 points in the PAC 12 Championship game. Listen to The College Football Experience’s Conference Championship recap episode to hear how we feel about the switch.

In summary, USC earned the right to play a postseason game and a chance to win the PAC 12 Championship. They lost but they shouldn’t be jumped by a team that didn’t earn the right to play a game. In the regular season both teams had 11-1 records, and were 2-1 against Top 25 teams, with that loss coming to their conference champion. But what separates those losses is that USC lost AT Utah 43-42, Ohio State lost 45-23 AT home vs Michigan. However, they find themselves in the fourth spot of the college football top 25 rankings.