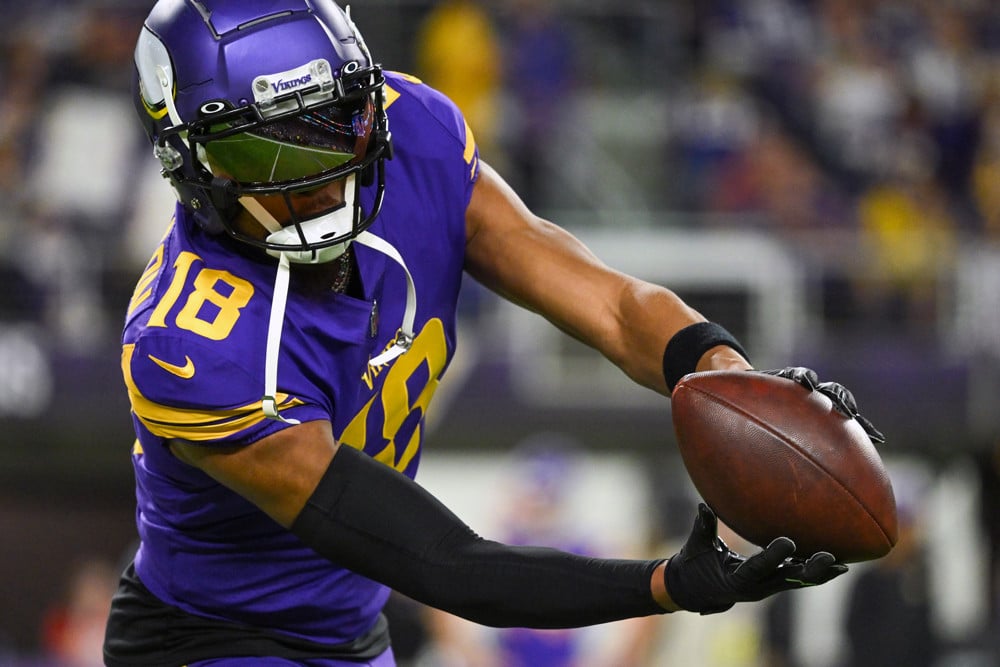 Dynasty fantasy football is always about planning for the future, no matter what your record is. And you can do that with help from our fantasy football dynasty trade value chart. Whether your current season is in shambles and you’re ready to look forward to next season, or your team is going strong. Either way, you should continue looking ahead in dynasty leagues, always looking to improve. And while trades may be shut off in your league, you can always agree to terms of a trade, or just plan ahead for your moves at the next possible moment.

This chart can serve as a little guide to help you decide what trades you may want to make. Or it can help you swindle your league, either way. It all depends on how you want to play it. While every situation and every team is different, and everybody values players differently, our dynasty trade value chart should help you weigh your trades and continue building on your dynasty legacy! Also, as always, we’re always trying to improve our chart, so each month you may see a couple of adjustments from the last month. The main thing is, just compare the players from this month with just this month, and not last month, as all the formulas on this month for each player are the same.

Just like last month, Josh Allen is the top quarterback on the fantasy football dynasty trade value chart again. Following Allen is Patrick Mahomes, who continues to have excellent value. Making a bigger jump this month is Jalen Hurts, who just got done running all over the Packers, rushing for 157 yards. Somewhat limited by a strong rushing attack, Hurts slings the ball pretty well too. Tied in the next two spots are young gun-slinger Justin Herbert and rushing quarterback Lamar Jackson. The biggest movement this month was by Justin Fields, as Chicago has unlocked the next level for the young quarterback as he’s run all over everybody as well as thrown fairly well. He’ll continue to develop but looks to be making a name for himself in the fantasy football world.

Christian McCaffrey is back on top. He’s managed to stay healthy this year and now is on a new team. And that new team is a run-heavy offense that will utilize him well in both the running and passing games. Behind him is a three-way tie. Kenneth Walker makes his way into the top five for running backs on the dynasty trade value chart after showing he can be the bell-cow for the Seahawks. Walker is tied with Saquon Barkley, who has had a phenomenal comeback year. They are also tied with Jonathan Taylor who struggled early on but seems to be getting back to his dominant.

After them, Austin Ekeler is fifth. It’s hard to rank him this high due to age but his high-volume and his strong usage in the passing game makes him a valuable fantasy football asset.

At only 23 years old and averaging over 22 points per game, Justin Jefferson finds himself on the top of this month’s fantasy football dynasty trade value chart. He’s become an uncoverable machine who shows up in most games. Not far behind him, is the electric Ja’Marr Chase. Both of these guys are excellent pieces to have on your fantasy football team and should continue to be great for years. Kupp falls far down the list after an injury put him on the injured reserve and he has a questionable quarterback situation going into next year after he’s been in the top five for quite some time.

23-year-old CeeDee Lamb is next on the list, showing he’s still Dak’s favorite target. A.J. Brown has looked great on his new team in Philadelphia and is fourth on our list. He’s tied with Stefon Diggs, who is a great asset for our top dynasty quarterback Josh Allen. He does compete with Gabe Davis for targets, however.

While Kyle Pitts started the season as the top tight end on the fantasy football dynasty trade value chart, his low average of points has bumped him down to number three. He is still incredibly talented but with the disappointing year and now going on injured reserve, it’s tough to know what things will look like next year. Instead, Mark Andrews makes his way to the top for the second straight month. Even though he’s 27 years old, Andrews is averaging excellent per game fantasy points.

Number two, Travis Kelce, actually has a higher points per game average, however at 33 years old doesn’t hold as much value in dynasty as Andrews, but only by one point. Both are excellent options as Kelce hasn’t shown any signs of slowing down. Behind these three is Dallas Goedert, who has done great as a starting tight end, despite being on injured reserve the past couple of weeks. Fifth is T.J. Hockenson who was traded from the Lions to the Vikings and finds himself in an excellent position to continue to succeed.

Use this as the start of your trading. A guide to which players you want to go after. Whether you’re already counting yourself out and looking to next year, wanting to give up some win-now players for future players. Or, perhaps you’re just looking to build your bench with depth of guys that will continue to contribute for you for years to come. Either way, hopefully, the dynasty trade value chart helps you out!