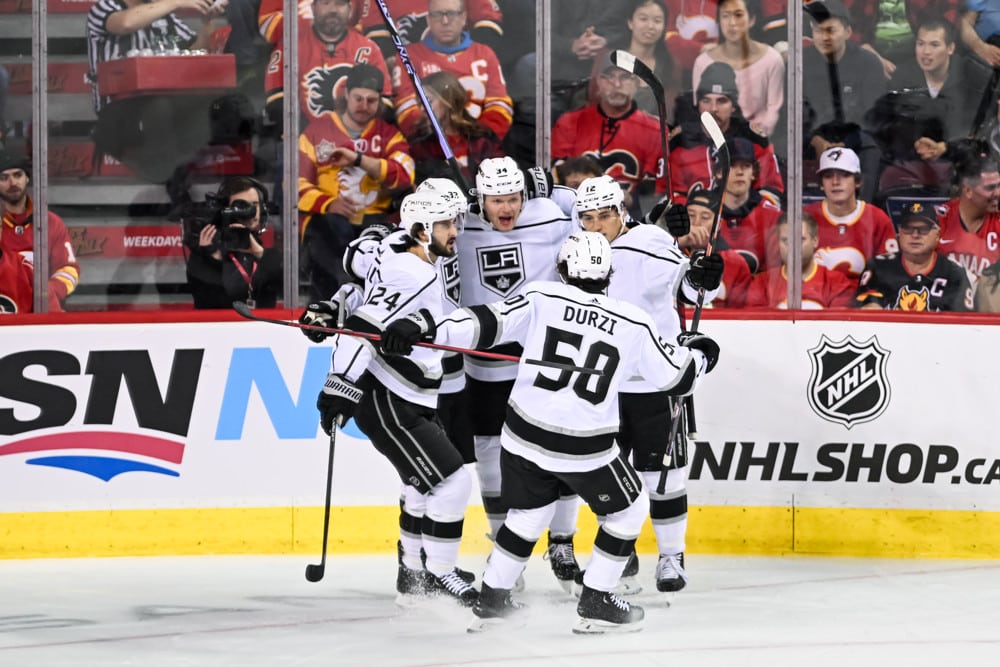 The NHL season is in full swing as we hit Thanksgiving week! This is when we start to get a real sense of teams that are going to be competing for the Stanley Cup this season. Welcome back to our fantasy hockey waiver wire, teams to stream, schedule, and best pickups article for this week!

Thanksgiving week also throws a wrench into the normal format. Rather than the busy nights being Tuesday, Thursday, and Saturday; Monday, Wednesday, and Friday take the spotlight this week. There are only two games on Tuesday night and five games on Sunday. We’ll be looking at those two days for this week.

The Kings are the only team that plays on both Tuesday and Sunday this week. There are also several teams with very few fantasy-relevant players playing on Sunday.

We’ll look at the Kings and then a random assortment of players for this week.

The Kings are the only team playing on two lighter nights this week. This is the second straight week they’re in this article and we’ll be looking at a few familiar faces.

Moore was only rostered in 17% of leagues a week ago so it’s good to see him get the respect he deserves. A hat trick on Wednesday certainly helped, as did another goal on Saturday night. He also had four shots on goal in his last three games.

The second-line winger also plays on the second power-play unit. Moore has 16 points in 21 games so far this season and is worth a look given the Kings’ schedule this week.

Danault also increased in rostered percentage from last week going from 21% up to 32% now. He had a goal and assist on Saturday night for his second and third points in as many games.

The two-way center plays in all situations and has put up 15 points in 21 games this season. He’s looking for a second consecutive 50-point season.

Durzi is also up in the 30s after being rostered in 24% of leagues last week. He did sit out on Saturday, so monitor his injury status fo this week. However, he averages 20 minutes a night and fills up the box score for the Kings. He has nine points, 31 shots, and 32 blocks in 19 games this season.

All players are rostered in less than 50% of leagues and play on a lighter night (Tuesday or Sunday) this week.

Couture has been on an absolute tear for the Sharks. He has goals in each of his last three games and five of his last six as well.

The Sharks don’t have many fantasy-relevant players, but Couture is making a case for himself. He has 15 points (9 G, 6 A) in 20 games this season, including 7 points (5 G, 2 A) in his last six games. Pick him up while he’s hot.

Eberle is a name from years past and he’s putting up numbers like years past recently.

The second-line winger has seven points (4 G, 3 A) in his last five games and 15 points in 18 games this season. He’s going to continue to shoot the puck and get scoring opportunities, especially after his overtime winner the other night.

Play in a deeper league? Freddy Hockey is for you.

Gaudreau plays on the Wild’s top line and second power-play unit. He’s been hot recently with a four-game point streak (2 G, 2 A) and the Wild play the Jets, Leafs, and Coyotes this week. He should be able to get on the scoresheet again, if only against Arizona.

This pair of Canadien second-line wingers are worth a look in deeper leagues as well.

Hoffman has eight points (5 G, 3 A) in 16 games this season but is running hot with six points in his last six games.

Gallagher also only has eight points, but in 18 games, and he’s recorded a point in two straight games (three points total).

Many have been quick to pick up Sanderson, but he’s still available in over half of leagues.

The young defenseman has taken Thomas Chabot‘s role on the top pair and power-play unit, and he’s making the most of it. Sanderson has five points (all assists) and 17 shots in his last eight games. He’s playing well over 20 minutes a night and should be rostered for at least the time being.