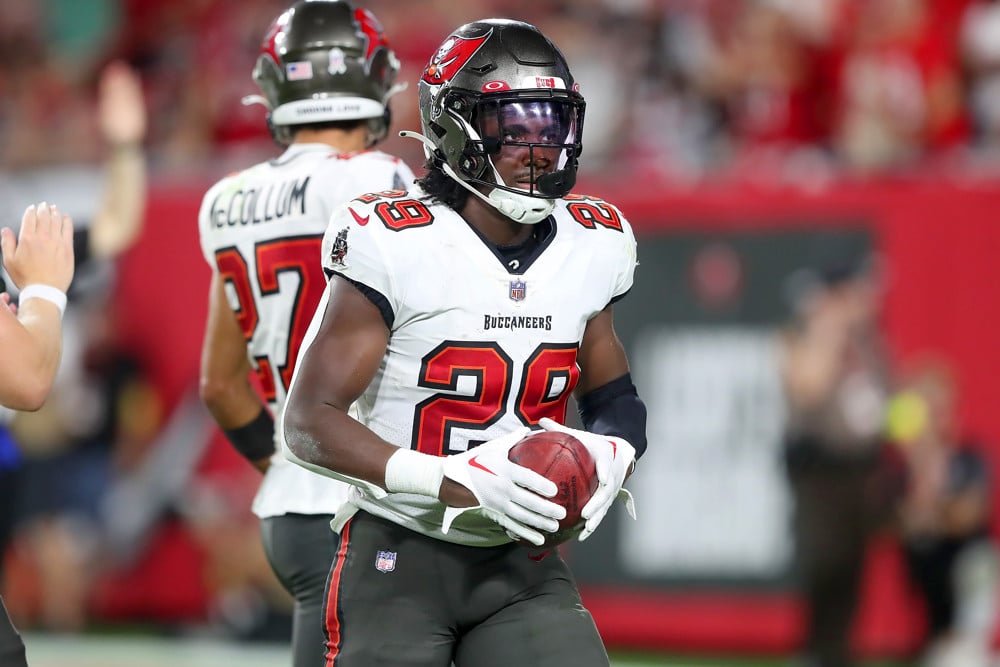 SGPN is back with another Week 11 FAAB Cheat Sheet breaking down the best waiver wire pickups for this upcoming week. Finding these players is only half the battle though. This article is unique in that we also discuss how much of your FAAB (Free Agent Auction Budget) budget you should spend on these players. Managing one’s FAAB budget is crucial for fantasy managers. I can’t think of a fantasy championship I have won that didn’t have some key waiver wire pickups on it. Properly managing your budget is important because a lot of managers are already out of money this time of year. While there are a lot of early-season breakout players, I prefer having a good portion of my budget left as I’m fighting for a playoff spot.

This is one of those weeks that saving your budget was beneficial as this is one of the best waiver wire weeks of the 2022 season. We saw young Tight Ends and Wide Receivers breakout, and we have some widely available Running Backs who could be fantasy starters down the stretch. If you still have the bulk of your FAAB budget left, this is the week to start spending as there aren’t a lot of weeks left to save it for. If you’re low on cash though don’t fret as I’d be willing to empty the budget on the first few names on this list.

Rachaad White is rostered already in over half of fantasy football leagues (56%) that number needs to climb to 100% this week. Leonard Fournette suffered a hip pointer in the Buccaneer’s win over the Seahawks. This allowed White to come in and rush for 105 yards on 22 rushing attempts delivering just the second 100 yard rushing performance the Buccaneers have had this season.

Furthermore, even before Fournette suffered an injury White had played more snaps and he finished with a 65% snap share in Week 10. I had defended Fournette prior to this week because White had been ineffective in his opportunities this season as well. This changed this past weekend and White is beginning to look like the much more impressive back. This will still likely be a committee backfield. However, White will be a borderline RB2 against the Browns after the Buccaneers return from their bye week.

Christian Watson will be one of the hottest waiver wire targets of the week after catching 4 passes for 107 yards and 3 touchdowns. After missing three full games due to injury and only clearing a 32% snap share once, it was beginning to look like a lost season for Watson. That all changed in Week 10 as he played on 84% of the team’s offensive plays and received a 40% target share.

With Romeo Doubs set to miss a few more weeks Watson and Allen Lazard will operate as the team’s top wideouts. Watson was already coming in on two Wide Receiver sets over Doubs a couple of weeks back prior to suffering a concussion. Rookie Wide Receivers have a track record of becoming fantasy relevant in the second half of the season, and the Green Bay offense is wide open. He’s one of my favorite targets in this Week 11 FAAB cheat sheet.

No one has been a harsher critic of Kadarius Toney than myself over the last year. Despite his obvious talent, Toney has been marred by injury since entering the league and has missed significant practice time due to personal reasons. These included headlines that suggested he was missing practice due to equipment issues. In addition, there were stories he was disgruntled in New York earlier in the offseason. For whatever reason Toney didn’t appear to be interested in playing football for the Giants.

Being traded was exactly what he needed though as he accounted for 90 yards and a touchdown in Week 10. He only played on 44% of snaps though and Juju Smith-Schuster did leave the game early due to a concussion. Regardless, the talent is evident, and with Mecole Hardman not fully healthy either, Toney has an opportunity to seize a starting role for the Kansas City Chiefs. I’m not quite ready to insert him into lineups yet but one more performance like that will change my mind.

After Week 8 Cole Kmet ranked as the TE31 on the season and now is all the way up to TE12 after just two weeks. In that time, he has had 9 receptions for 115 yards and 4 touchdowns. This is a testament to just how bad the Tight End position has been this season as there are very few consistent contributors. Nonetheless, Kmet is leading the Bears in targets over the last two weeks and he has entered the low TE1 conversation.

He’s still only rostered in 53% of Sleeper fantasy football leagues and that should increase to 90+% when waivers clear this week. Targets in a low-volume passing offense will be hard to come by at times, but his upside will lock him into fantasy lineups. I wouldn’t want to spend more than 10% of my FAAB budget, however, I would consider more if I was desperate for a starter.

As usual for this time of year, the Running Back position is getting thin once again. There isn’t another starting Running Back in the NFL that is only rostered in 33% of Sleeper fantasy football leagues. His stat line wasn’t flashy because he didn’t have any receptions. Nonetheless, he rushed 16 times for 82 yards which was the second most by a Chief Running Back this season.

Clyde Edwards-Helaire also only managed four snaps and didn’t receive a single rushing attempt either. While Jerick Mckinnon is locked in for the passing work, Pacheco has clearly seized the early down role. While this hasn’t translated to fantasy production as of yet this offense is still fantastic. This alone will give him touchdown upside down the stretch, and he would be an RB2 if he were to get a 60% plus snap share.

After a very slow start to the season, Parris Campbell has come alive finishing as a WR1 in each of the last three games he’s played with Matt Ryan. You heard that correctly he has a top 12 Wide Receiver finish in three of his previous five games. In-between these performances were some dud games with Sam Ehlinger as his Quarterback. Campbell wasn’t at fault though. The whole offense suffered and Ryan is a welcome sight for managers with Colts on their fantasy rosters.

Despite his struggles with turnovers, he gives the Colts the best chance to win and puts the offense in a position to score more often. As long as Matty Ice remains the starter in Indianapolis you can lock Campbell in as a WR3 in your fantasy lineups. He’s only rostered in 27% of leagues on Sleeper and you can plug him in fantasy lineups next week.

Despite Najee Harris having his best game of the year this past Sunday, it also coincided with Jaylen Warren’s most impressive fantasy outing as well. His usage has increased dramatically in the last two weeks finishing with over 10 PPR points in each game. This is in line with what the Steeler’s coaching staff was hinting at and he should continue to have a significant role in the offense. I believe reports of him taking over the backfield were overblown.

Regardless, he at worst is a high-end handcuff and would be a locked in RB2 if anything were to happen to Najee Harris. Over the years fantasy championships have been won and lost on the heels of backup Running Backs being thrust into a key role. Jaylen Warren is a great stash as we get into the home stretch of the fantasy football season.

My take on the Najee Harris Jaylen Warren situation:

-No, Warren isn’t likely going to become the starter/bellcow
-Yes he has been much better than Najee this season
-Yes he likely will continue to see more touches
-This becomes a Zeke/Pollard type relationship.

The second Chief Running Back too appear in this article. It is actually McKinnon who leads the Chiefs in fantasy points over their last four games. Prior to Week 10, it was McKinnon who had led the Chiefs in snap percentage four games in a role as well. McKinnon has been a solid PPR option too over the last two weeks catching 12 passes in that span. Each week he finished as an RB2 and should be picked up in most PPR leagues at this point. He’s not a starter in standard formats. However, having the satellite back role in a great offense will keep him in flex consideration most weeks.

Slayton has emerged as the top receiving option for the New York Giants garnering the most targets on the team since Week 5. This includes Saquon Barkley, and Slayton has three top-24 Wide Receiver finishes in that five game stretch as well. He had his finest performance of the season this past Sunday too catching 3 passes for 95 yards and a score. Slayton is only rostered in 9% of leagues and will be a borderline top-30 fantasy receiver when I update my Week 11 rankings this week.