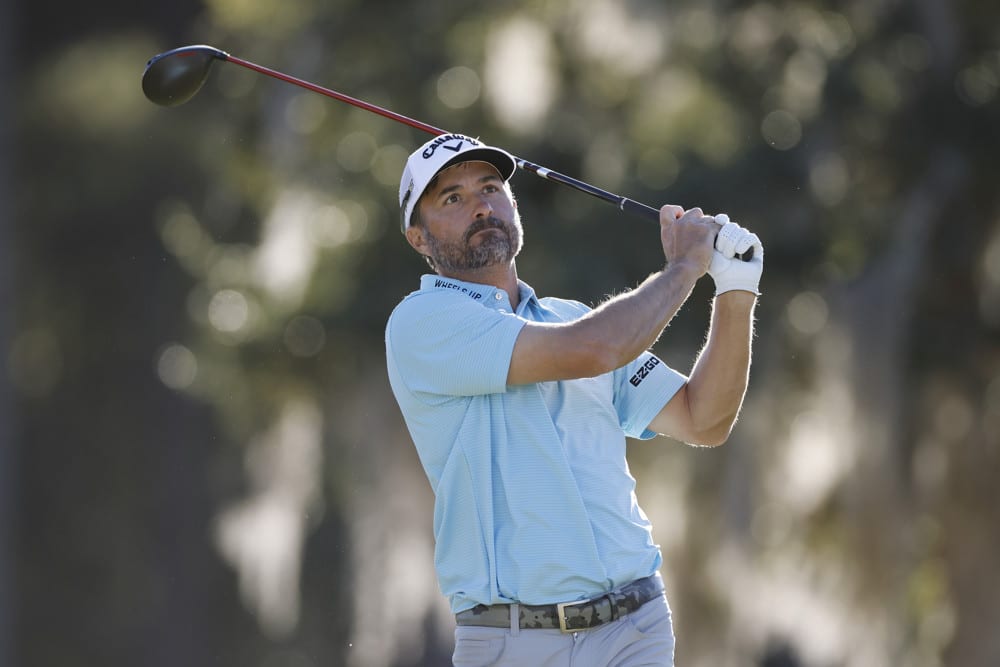 It’s last event of the PGA Tour fall swing. It’s probably the last time we’ll see the fall swing in its current format. And unfortunately, it goes out with a bit of a whimper. A relatively mediocre field heads to St. Simons Island for the 2022 RSM Classic at Sea Island Golf Resort. As always, here is your early deep-dive on the 2022 RSM Classic and a preview of how to bet. In addition, listen below to the Golf Gambling Podcast for more information about golf betting.

As mentioned up top, this is a pretty weak field. Typically the field isn’t all that strong at an RSM Classic. But this year’s feels considerably worse. Basically, take the Houston Open field and remove Scottie Scheffler, Sam Burns, and Hideki Matsuyama and that’s what we’re left with. When a guy like Aaron Wise is a notable omission, that’s when you know that there’s a lack of star power.

Currently, the best player in the field is Tony Finau. Tony Finau won for the fourth time in 14 months at the Houston Open (as predicted on the Golf Gambling Podcast). But there’s a non-zero chance by the time you read this that he’s already withdrawn from the tournament. He’s only played this tournament once, so there isn’t a significant tie to the event. And his victory gave him a big head start in the FedEx cup rankings. There’s no real incentive (unless there’s a sponsorship commitment) for him to play. Stay tuned.

The Sea Island Golf Club and Resort was first developed in 1926 after Sea Island Company founder, Howard Coffin, purchased a former cotton plantation on Sea Island. Coffin loved the game of golf, and he brought in famed Australian amateur golfer and architect Walter Travis. Travis was a three-time U.S. Amateur Tournament winner, and after his playing days he developed several private country clubs around the country. Travis employed classic Scottish Links styles to his golf courses. He is also most famous for small “chocolate drop” mounds in the fairways and for small, elevated greens.

However, midway through the design of the first nine holes of the Plantation Course, Travis died unexpectedly. Not to be deterred, Coffin brought in another famous architect, Harry S. Colt (of Royal Portrush and Royal Liverpool fame), to finish Travis’s vision and complete the nine hole Plantation and the nine hole Seaside. Several other nine hole tracks were created in the decades that followed. This included the Retreat and the Marshside.

In 1977, Davis Love Jr. moved to Sea Island to become the head golf pro at the Sea Island Golf Club and Resort, bringing along his son – Davis Love III. The Love family grew up there and Love III career flourished. From his success, Love III was able to invest valuable resources into the club to make it a top notch performance center, and he wielded significant influence on the resort. Sea Island is truly Davis Love III’s Valhalla.

In 2006, Sea Island began hosting a regular stop on the PGA Tour in the fall, first named as the McGladrey Classic and now known as the RSM Classic in its current incarnation.

In 1999, the Sea Island Company and Davis Love III tasked Tom Fazio to redesign the Seaside Course and the Marshside Course and merry the two nine hole tracks. Fazio did just that and gave facelift to both golf courses, including renovating the bunkers into a classic clamshell bunkers, shrinking the greens and adding exposed sand dunes off the fairways.

The front nine is the old Marshside Course and plays, appropriately enough, around the edges of a huge marsh. The back nine is the old Seaside Course next to the bay. This golf course is not an easy one for most amateurs. Trouble lurks for the high handicapper everywhere on the golf course, with marshes, water hazards, and large sandy waste areas ready to eat up errant shots. Wind is a big factor on the golf course. This creates some challenging cross winds on a few holes.

The greens on the Seaside Course are fairly large. They average about 7,200 sq. feet in area. That’s a very generous target for players to hit into. However, many greens funnel errant shots into collection areas off of tight bermuda lies. It’s almost easier for amateurs to miss the greens by a mile. It gives them a better chance of chipping off in the rough where the ball might be sitting up and on flatter surfaces.

As mentioned previously, players will play three of their four rounds on the Seaside Course.

This wasn’t just a simple redesign with a few new bunkers and lengthened holes. This was a complete transformation of the golf course. Almost every hole was tinkered with. Many holes saw their fairway bunkers reduced in size but more rectangularly shaped, similar to that of classic Scottish Links design. The greens were entirely rebuilt and are more squared off than before. Other hallmark Travis features such as the chocolate drop mounds are presented across the golf course. There’s also a principle nosed bunker complex in the middle of the 10th fairway.

This is an entirely new golf course, and it seems like Love and his company hit it out of the ballpark. Love’s design company did a good job with the redesign of the Plantation Course. It’s a creative track that has many of the basic principles and quirks of classic Scottish Links golf. From the overhead view, the golf course requires a great mix of thoughtfulness and creativity.

Overall, the golf courses provide for a relaxing viewing experience with vistas of the surrounding marshland and backwater bay. It’s not the best set of golf courses on the PGA Tour. But it provides for some nice easy viewing should a viewer stumble onto the (what little they offer) coverage.

Let’s begin the betting strategies section of the column with some facts about Sea Island’s Seaside and Plantation courses. This will help preview the 2022 RSM Classic.

1. Only the Seaside Course maintains historical ShotLink data. For years, however, the Plantation Course was the much easier of the two golf courses over the first two rounds. This has not been the case post renovation. In 2021, the Plantation Course played about 0.1 shots more difficult than the Seaside Course did. Davis Love’s renovations added a bit of difficulty to the track to make it about even in difficulty to the Seaside.

While TifEagle is also the strain of bermuda normally seen at several other courses like TPC Sawgrass, Innisbrook and Harbour Town, these greens are overseeded with a poa trivialis for tournament play. These greens roll a little differently with an overseed than they do with just the TifEagle as the dominant grass on the green.

4. While we don’t have past strokes gained stats for the Plantation Course, we have significant data for the Seaside to help preview the 2022 RSM Classic. The Seaside Course is annually one of the easier tracks on the PGA Tour with average scores about -1 each round. Its set of Par 3’s are the fourth easiest on the PGA Tour at venues with at least one event over the last 5 years. Its Par 4’s and 5’s also featured above average easiness in terms of scoring.

Putting, scrambling and approach play all feature some of the easiest conditions to score in at the Seaside Course. If there is difficulty to be found, it’s off-the-tee. While the rough isn’t penal, there are several waste areas and penalty areas just off of it that can derail a round quickly. In fact, the Seaside Course features the highest percentage of penalty shots on the PGA Tour since 2015. It ranks higher than places like Concession, Liberty National and the Golf Club of Houston, all of which have numerous water hazards to gobble off errant drives. It’s imperative to keep the ball in front of you off-the-tee at the Seaside Course. If so, scoring is relatively easy.

The relative skill set chart confirms this and is a preview of what to expect at the 2022 RSM Classic. 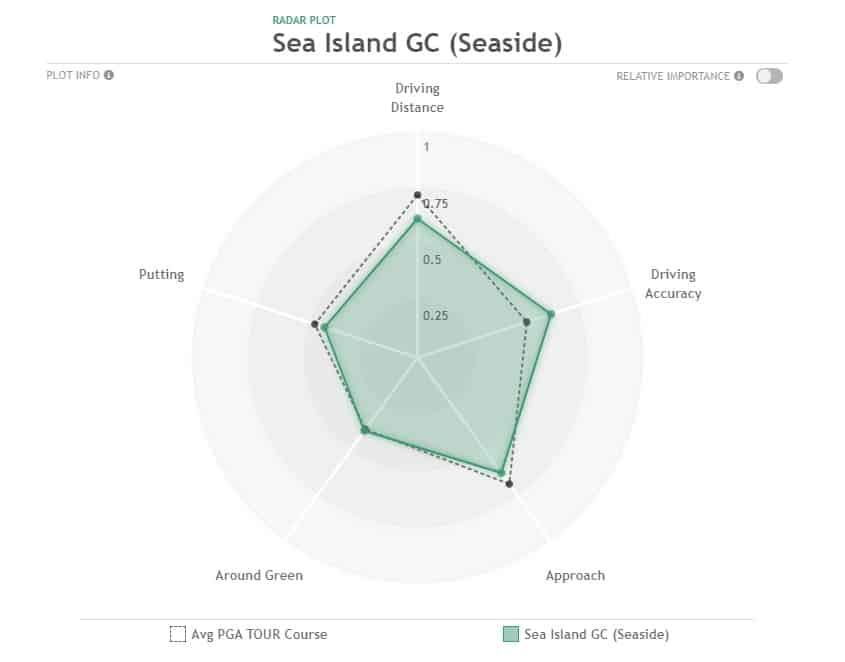 The relative skillset chart for the Plantation Couse tells a similar story: 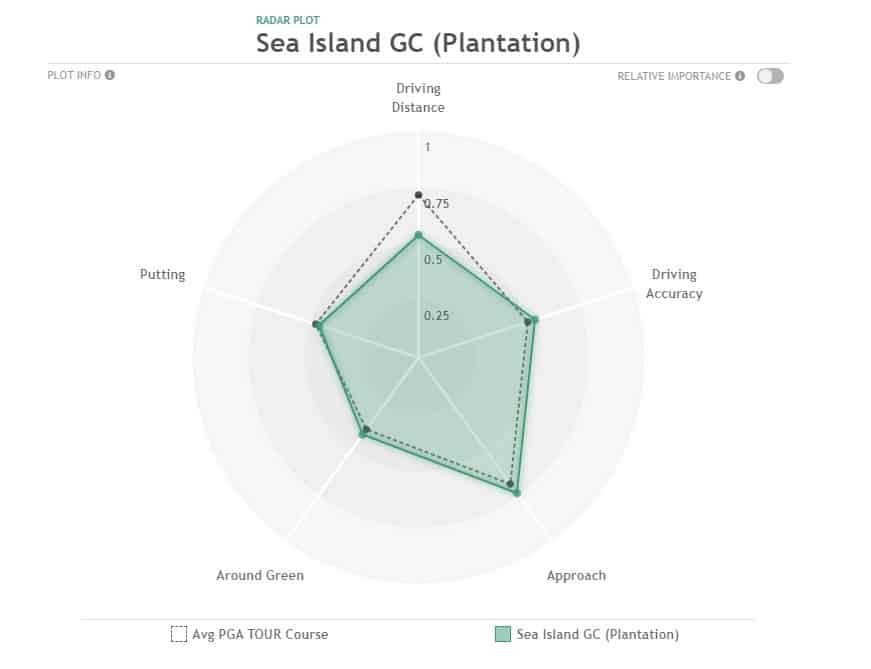 While players can improve accuracy with opportunities to take less-than-driver off the tee, accurate players historically have had a big edge at the RSM Classic over the bombers.

Last week’s Houston Open was all about the longer approach shots. This week’s RSM Classic is the exact opposite. All proximity ranges under 175 yards at the Seaside Course feature above average rats of shots per round than on the typical PGA Tour venue. Where players will hit longer approach shots will be at all the Par 3’s (three of which play over 200 yards) and at the two Par 5’s (which could turn into wedges if they play as three shot holes). Otherwise, only one Par 4 plays over 460 yards, and eight of 12 play 425 yards or shorter.

The Plantation Course also features numerous short approach shots. While there are two additional Par 5’s, it’s possible those are three shot holes and the approach into the green is with a wedge. In addition, two of the Par 3’s on that track play about 155 yards each. And only three Par 4’s play over 450 yards, including a whopping five of 10 that play under 400 yards.

As such, this is a preview what gamblers can expect at the 2022 RSM Classic and try to target with their bets:

1. Players who excel in approach shots under 175 yards (with an emphasis on performance under 150).

2. Accurate drives of the golf ball who are able to avoid penalty strokes.

3. Players who putt well and are able to convert on numerous birdie looks, particularly those who have proven to do so on bermuda greens.

Follow these tips in this preview, and one should put together a solid DFS lineup and betting card for the 2022 RSM Classic.