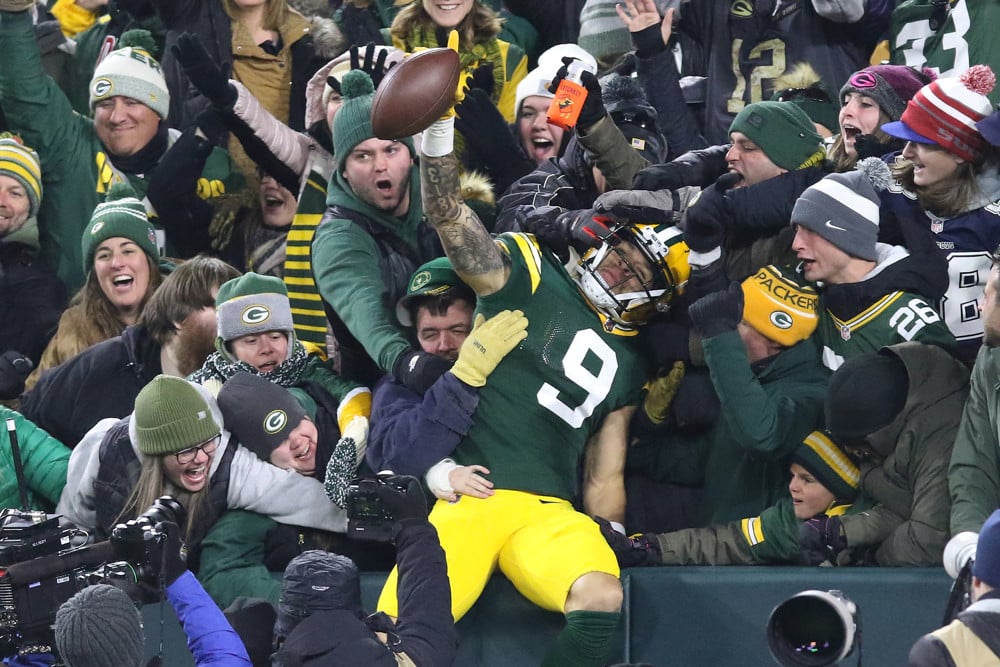 Another week of fantasy football and another week closer to the playoffs means you may be looking into some early fantasy football Week 11 waiver wire targets. After more underperforming players and more injuries, who can help you make that final push into the playoffs? Not to mention, Cooper Kupp may miss time. Which players should you be adding immediately to help continue to craft your team into a championship team? Keep reading to see which players you should be considering.

While the Packers have been so hit-and-miss all year, Christian Watson may have finally stepped up. Back from a concussion, Watson only had four catches in the Packers’ game against the Cowboys. However, that was good enough to lead the team in catches. He also led the team in receiving yards where he racked up 107. Last, and most important for fantasy football, Watson had three touchdown catches. Nobody else on the Packers scored a touchdown. This connection may be a more permanent thing going forward, making Watson an excellent fantasy football Week 11 waiver wire target.

The Chicago Bears have averaged 31 points over the last four games. With that offensive resurgence has come the re-emergence of Cole Kmet. A talented tight end out of Notre Dame, Kmet had yet to hit his stride in the NFL. However, he may have finally found it with Justin Fields‘ elevated play as of late. This Sunday in the loss to the Lions, Kmet was targeted seven times. He pulled in four of those for 74 yards and two touchdowns. This is the second game in a row that Kmet has had two receiving touchdowns and he’s had five total in the last three games. He’s rostered in half the leagues, but in those that he’s available, Kmet is an excellent fantasy football Week 11 waiver wire pickup.

Out of nowhere, Matt Ryan made his return to the turf after being benched for Sam Ehlinger. This was good for pass catchers, including Parris Campbell. Campbell was targeted nine times and pulled in seven of those targets. He finished with 76 yards and a touchdown. If the Colts continue to move forward with Ryan under center, which it seems Jeff Saturday is going to, all the receivers should benefit. And Parris Campbell looks to be one of his top targets, making him an excellent fantasy football waiver wire target.

The Giants have had injuries up and down at the wide receiver position and therefore it’s been hard to get consistency. However, it looks like we may be starting to get some consistency out of Darius Slayton. In the past three weeks, Slayton has caught 11 passes on 16 targets for 213 yards and two touchdowns. This last week was his best week all season so far with 95 yards and a touchdown. Even though the Giants’ offense tends to run through Saquon Barkley, they’ll continue to pass as well. It appears as if Darius Slayton is proving to be one of Daniel Jones‘ favorite, making him a good fantasy football Week 11 waiver wire target.

What a play by #Giants WR Darius Slayton. Holy! pic.twitter.com/GHyP1El7XK

After Christian McCaffrey was traded to the 49ers and Elijah Mitchell was on injured reserve, Mitchell was dropped in more leagues than he probably should have been. Mitchell was just elevated from the injured reserve and played in his first game of the season. Surprisingly, he out-touched McCaffrey 18 carries to 14. Even more importantly, he outran Christian McCaffrey. With his 18 carries, he ran for 89 yards while Christian McCaffrey’s 14 carries only went for 38. Yes, McCaffrey will continue to have a strong hold on the backfield, and in the passing game, however, it does look like Mitchell will continue to have involvement in the offense. He’s a running back to consider, especially if you’re struggling at running back, for your fantasy football Week 11 waiver wire targets.

The Titans were happy Ryan Tannehill was back after Malik Willis struggled in filling in for him. However, nobody might have been as happy about Tannehill coming back as Nick Westbrook-Ikhine was. Having the best game of his season, Westbrook-Ikhine caught five passes for 119 yards and two touchdowns. Westbrook was targeted a season-high eight times for a season-high five catches. Without a couple more weeks of seeing, it’s hard to know if this was an outlier or not. However, if you’re desperate at wide receiver, Westbrook-Ikhine is worth a look as a fantasy football Week 11 waiver wire.