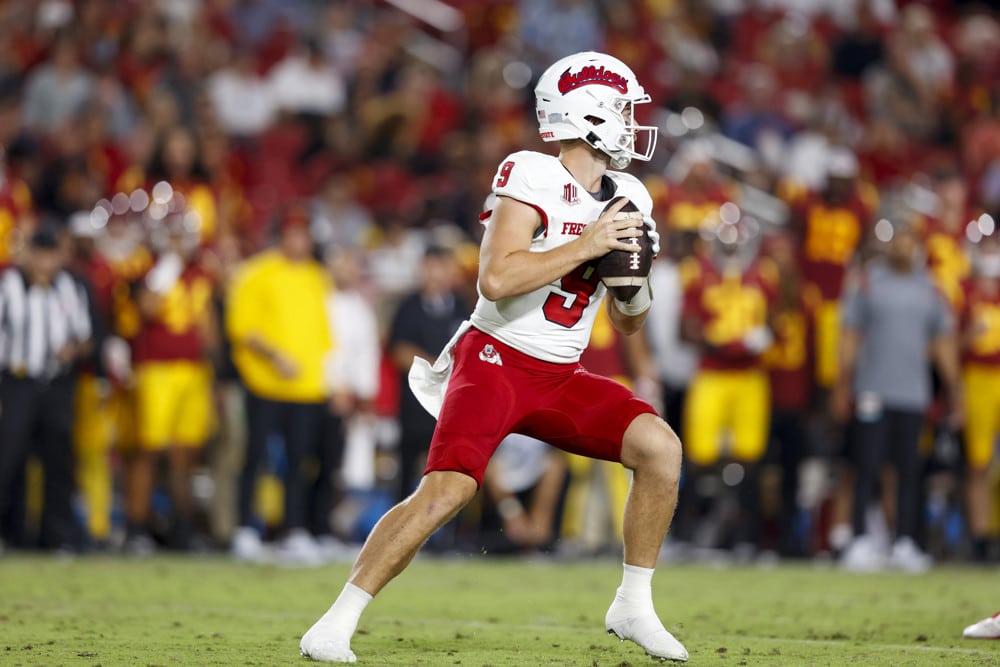 Week 10 is almost upon us and we’ve got more point total bets that can’t miss. We’ve crunched the numbers, run all the simulations, and considered every possible scenario. There’s almost no way these picks don’t cash. If sports books are no longer open on Monday morning, it’s because they allowed bettors to take these bets. Let’s dive in to the point totals bets that you have to be on for week 10 of the college football season.

Hawaii hasn’t given up over 40 points in a game since a Week Five match up against New Mexico St. Since then, the Warriors have kept San Diego St., Nevada, Wyoming, and Colorado St. under 30 points. The Warriors appear to be showing signs of improvement. They’ll still get absolutely wrecked by Fresno St., but this game won’t be as laughable as their Week Zero game against Vanderbilt or in Week Two against Michigan.

Fresno St. has won three in a row and will likely extend their winning streak to four in a row on Saturday. The Bulldogs have only gone over 40 points in a game once this year, and that was in Week Seven against New Mexico. Fresno St. quarterback Jake Haener is healthy again and he’s been absolutely slinging it since returning from an ankle injury.

Hawaii will struggle to score more than 20 points on Saturday night, but they’re not going to get 60 dropped on them by the Bulldogs. Fresno St. will win comfortably, but this one probably won’t get completely out of hand. The Hawaii defense has shown improvement since Week Zero, and should be able to put up enough resistance to keep this one below the 63.5 point game total.

Louisville has been over 30 points in five of their last six games, and appear to have figured out how to move the ball after getting off to a rough start. The Cardinals are coming off a 48-point performance against Wake Forest. Quarterback Malik Cunningham has five touchdowns through the air and 11 touchdowns on the ground this year.

James Madison has only had one game with fewer than 30 points this season. It was last week against Marshall. Quarterback Todd Centeio suffered a shoulder injury in late September, and was held out of the Marshall game due to a related injury. He was supposedly a game time decision last week. Backup quarterback Billy Atkins made his first career start last week, and tossed four interceptions. JMU had a bye week last week, and Centeio is expected to start. Louisville only has eight sacks this year, so this isn’t a terrible match up for Centeio to return to.

As long as Centeio plays, this game should go over the 52.5 point total. If Centeio is out, jump on the JMU team under.

The Texas Longhorns have to face the Kansas St. offense in Manhattan? K-State is an absolute freight train on offense this year, especially at home. The Wildcats have gone over 26.5 points at home against Missouri, TCU, Oklahoma St., and Texas Tech. They’re also averaging 31.0 points per game this year.

The Longhorns have played exactly two real road games this year, and have been lit up in both. They gave up 37 points to Texas Tech in Lubbock, and 34 points against Oklahoma St. in Stillwater. They should give up over 30 points to a Kansas St. offense that has been exceptionally productive with Adrian Martinez and Deuce Vaughn running all over the field. They should go over 26.5 points with ease on Saturday.

This is more of a bet on the Baylor defense than against the Oklahoma offense. The Jeff Lebby offense doesn’t work against a Dave Aranda defense. Oklahoma hasn’t gone over 32.5 points in a game against Baylor since 2018. Since Aranda arrived in Waco, TX, Baylor is 1-1 against Oklahoma and has only allowed 41 total points against across both games. Baylor may not get the win on Saturday, but they’ll keep this close, and their defense is good enough to keep the Sooners under 32.5 points.

The Mississippi St. Bulldogs get the Auburn Tigers in Stark Vegas this weekend. The Tigers have given up over 40 points in three consecutive games. This Auburn team features a bunch of guys that are probably headed for the transfer portal in about two months and don’t really have anything to play for.

Mississippi St. averages 31.8 points per game and have dropped two in a row. This is a get-right, tune-up spot in front of a home crowd ahead of a match up with Georgia. The Bulldogs should absolutely roll on Saturday, and 31.5 points is way too low for this game. Bettors need to bang the over on Mississippi St. in Starkville.