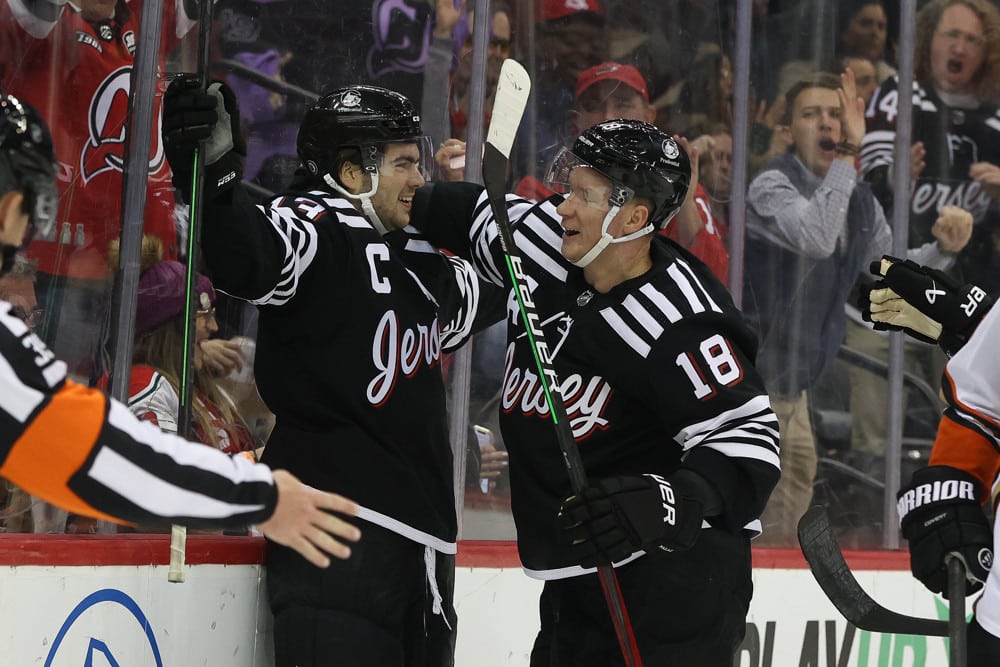 The 2022-23 NHL regular season is now a few weeks old and there have been plenty of surprises so far. If those surprises have impacted your fantasy hockey team, we’re here to help you out. We’re going to be taking a look at the teams with the most favorable schedules in the upcoming week with a few waiver wire pickups for each squad.

Week 3 follows that typical formula to a tee. The heavy nights this week are Tuesday (10), Thursday (10), and Saturday (12).  The lighter nights are Monday (6), Wednesday (3), Friday (6), and Sunday (5). Picking up players to get some extra games in on those nights could be the difference in you winning and losing your matchup.

There are 11 teams that play four times this week, but only three of them play on each at least three of Monday, Wednesday, Friday, and Sunday. Those teams are the Vegas Golden Knights, New Jersey Devils, and Winnipeg Jets.

The Anaheim Ducks only play three games this week — all on lighter nights — but they lack any fantasy-relevant players rostered in less than 79% of leagues (Trevor Zegras, John Klingberg, Troy Terry).

Vegas’ big guns are all rostered in over 90% of leagues, but then it drops down to 37%.

Stephenson plays on the second line with Mark Stone and Brett Howden, so he doesn’t get an even-strength boost with Jack Eichel. However, he does play on the first power-play unit with Stone, Eichel, Jonathan Marchessault, and Alex Pietrangelo.

Stephenson has a goal in each of his last two games on five shots on goal. He broke out with 64 points (21 G, 43 A) in 79 games last year and he’s keeping up that pace with five points in his first six games this season.

Smith does play on the top line with Eichel and Phil Kessel and it’s paying dividends early in the season. He’s had at least three shots in each of his first six games (watch out for his shots on goal prop if you’re looking for a bet) with a power-play goal and two assists.

Smith has had a few down years in shortened seasons after a few straight 50-point seasons. Playing with Eichel may be able to awaken Smith. He should be available in most leagues and the Knights have a favorable schedule.

Martinez is no Alex Pietrangelo or Shea Theodore, but he’s a useful defenseman for the Knights. He plays on the top pair with Pietrangelo as well as the penalty kill. That’s helped him to 24 blocked shots through six games.

The Devils also have a few top guys that are going to be rostered in your league, but there are quite a few in the 15% to 40% range for us to choose from.

Palat isn’t my first recommendation — I just like to go in Rostered % order — but he’s a solid look.

The former Lightning winger has three goals in his last three games and could take advantage of playing on the top line and second power-play unit.

Hischier is the guy that needs to be added for this week.

He was held off the scoresheet in his first game of the year but has a point in each of the last three, and they haven’t been cheap either. Hischier has two goals and four assists for six points in his last three contests.

The 2017 first-overall pick is playing on the top line and power-play unit. Pick him up in your league before someone else does.

Blackwood is the clear starter for the Devils and he has the talent to be better than he’s shown in his career. And he’s showing that recently.

Since allowing four goals on 24 shots to the Flyers in the season opener, he’s allowed just four goals on 59 shots (.932 SV%) in the last three games — all wins.

Blackwood should have a decent chance to pick up another win in his first start of the week (Washington or Detroit) and then to end the week against the Blue Jackets.

The Jets have not gotten off to a good start and it doesn’t help that Nikolaj Ehlers is on IR. They have a handful of top-rostered guys and then a few mid-tier options.

Wheeler probably shouldn’t be rostered in this many leagues but he’s a decent option this week. He plays on the second line and top power-play unit.

The veteran forward has three assists and 12 shots in five games this season.

Wheeler was drafted in 2004. Perfetti was born in 2002. The youngster may have the edge at this point. Perfetti has four points (1 G, 3 A) on the season, all in the last three games.

I’d rather take a chance on Perfetti and hope he can stay hot while playing with Wheeler and Pierre-Luc Dubois. He’s also getting a crack on the second power-play unit.