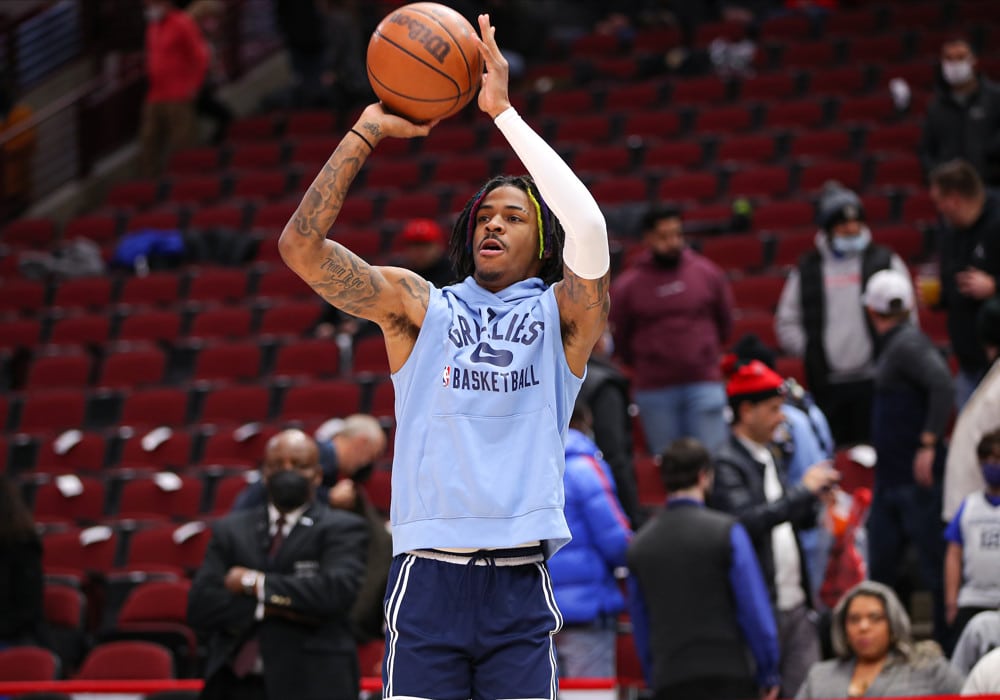 CHICAGO, IL – FEBRUARY 26: Memphis Grizzlies guard Ja Morant (12) shoots the ball before a NBA game between the Memphis Grizzlies and the Chicago Bulls on February 26, 2022 at the United Center in Chicago, IL. (Photo by Melissa Tamez/Icon Sportswire)

The NBA season is here and the next up is the NBA Southwest Division for our division previews! Let’s take a look at the five teams in that division and give out some best bets!

The Memphis Grizzlies head into the 2022-2023 season with much optimism. They overachieved last year winning 56 games and advancing to the 2nd Round before falling to the Golden State Warriors. The Grizzlies were led by a breakout season from PG Ja Morant. Morant had a career year en route to winning the Most Improved Player of the Year. In addition to Morant’s breakout year was the improved play from the supporting cast in Desmond Bane, Jaren Jackson Jr., and Dillon Brooks. The depth and toughness of this Memphis franchise were on full display in the 25 games Morant missed, where they had a record of 20-5.

Expectations are high for the Grizzlies to take the next step and get to the Conference Finals or even the NBA Finals in 2022-2023. The major addition for this Memphis team in the offseason was the trade for Danny Green. Green will be able to provide this young core championship experience and perimeter shooting. Things are trending in the right direction for the Grizzlies and I want to buy stock in them before it’s too late! I like the Grizzlies as my dark horse team in the Western Conference!

The Dallas Mavericks enter the 2022-2023 season with high expectations despite some questions marks. The Mavericks stumbled out of the gates last year to a 17-18 overall record before catching fire in 2022 to finish 52-30. They were led by their young superstar, Luka Doncic. Doncic and company were able to continue that second half of the season momentum all the way to the Western Conference Finals. Ultimately Dallas fell to the Golden State Warriors but were able to notch series victories over the Phoenix Suns and Utah Jazz.

If Dallas is going to go on another run this season, especially in the NBA Southwest Division, they will need to fill the big void of Jalen Brunson, who signed with the New York Knicks this offseason. Brunson complimented Doncic perfectly in the backcourt and they will rely on Spencer Dinwiddie and Tim Hardaway Jr. to fill that vacated role. The trade for Christian Wood will also provide this team with more front-court depth. Overall I like this Mavericks team and view them as a playoff team, but I look for them to take a small step back in 2022-2023 because of the loss of Jalen Brunson in the backcourt.

The New Orleans Pelicans come into the 2022-2023 season as one of the more intriguing teams in the league. The Pelicans got off to a miserable start last season going 3-16 over their first 19 games. They were able to rally and sneak into the Play-In-Tournament before knocking off the Spurs and Clippers. New Orleans turned it around due to great years from Brandon Ingram, Jonas Valanciunas, and Herbert Jones. However, the main reason for the turnaround was the trade deadline acquisition of CJ McCollum. McCollum was able to come over and provide leadership and stability to a talented young core.

There is much optimism for this young Pelicans team because of the return of Zion Williamson. Williamson had a career year in 2020-2021 but sat out the entire season last year due to a knee injury. New Orleans fell short in the opening round of the playoffs to the Phoenix Suns in large part due to their limitations offensively. I am looking to back this Pelicans team to continue their 2nd half momentum with the addition of Williamson in 2022-2023 and win close to 50 games in the NBA Southwest Division!

Zion Williamson showing off his explosiveness in his first NBA game in 517 days!

The San Antonio Spurs enter the 2022-2023 campaign with all-time low expectations. The Spurs came up short in the Play-In-Tournament being eliminated by the Pelicans after finishing 34-48 overall. San Antonio was led by Dejounte Murray, who did everything for this Spurs team in 2022. Last season marked the third straight no playoffs for the Spurs after a 22-year run where they never missed the playoffs under Gregg Popovich.

The main bright spot for the Spurs last season was the strong play they got from Murray. Unfortunately for Spurs fans, they traded him away to the Atlanta Hawks this summer. This move officially marked a new era in San Antonio, where it becomes very apparent that this organization is in rebuild mode. They added pieces to their organization in the draft with the selections of Jeremy Sochan, Malaki Branham, and Blake Wesley. I expect a long season in Texas for these Spurs and think they have a very good chance at landing the #1 pick overall come next June. Things will be very interesting in the NBA Southwest Division if the Spurs land the #1 overall pick.

The Houston Rockets come into the 2022-2023 season with overall low expectations, but room for optimism with their young core. The Rockets finished an NBA worst 20-62 last season large in part to their slow 1-16 start. Houston saw a breakout rookie year campaign from Jalen Green and will look to continue to build around him. Additionally, Christian Wood provided another scoring element in the front court in his breakout season for the Rockets.

Like the Spurs, the Rockets decided to trade one of their few bright spots in return for draft capital in the offseason when they traded Wood to the Dallas Mavericks. Houston will look to their strong draft class to continue to build on an already strong young foundation. In June’s draft, they selected Jabari Smith Jr., Tari Eason, and TyTy Washington Jr. all in the 1st Round. There will be a lot of growing pains for Houston this season, but I expect this young core to get better as the season goes along in the NBA Southwest Division.