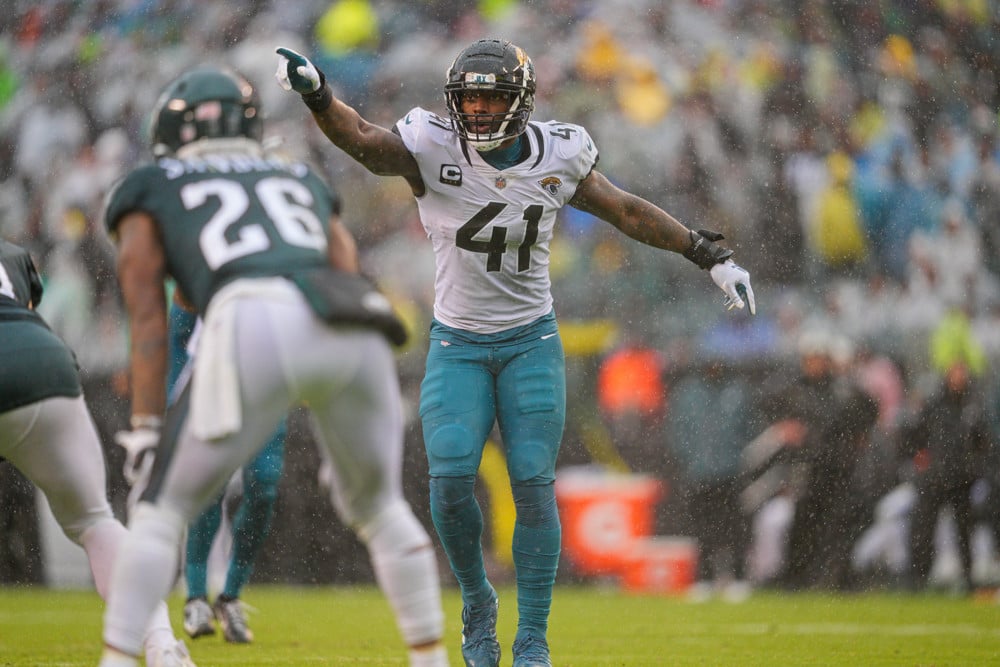 Welcome back, and thanks for joining us again this week. And, of course, we’re right to our Week 5 IDP fantasy football risers, fallers, pros, and regular Joe’s footnotes. Covering NFL locker room reports and any scenario changing in between. Or just passing on some of the in-house rumors and reports by the local beat writers. Whatever it is. If it’s NFL defensive player related, and could change the game somehow. It’s always going to be worth talking about IDP fantasy football footnotes.

Just a quick reminder to any IDP manager out there dragging their feet at this point. At least those in shallower redraft standard leagues. And likely more of a novice league, I’m sure. But it’s important at this point if you’re holding onto a “stud” named defensive player. One that’s costing you right now big time.

Basically and comparably to his redraft stock and projections, you’re hanging on, and we all do it. But you are pushing if you’re waiting him out heading into week 5. The waiver wire’s top performers normally start getting scarcer right about this time.

If you’ve been enjoying some of the higher-end production from the Falcons ILBs. You’ll want to keep a real close eye on Deion Jones if you’re not familiar with the situation. He’s a relevant tier-one play that’s eligible to come off the injured reserves this week. And it could have major implications as far-reaching as the rest of the season.

If Jones is activated for week 5. The two incumbent inside linebackers, Mykal Walker and Rashaan Evans, are bench meat. Barring any real hard-core reports indicating otherwise, and even then. The risk will still be there a rotation will cut at least two players’ production down the middle. Even possibly all three the first week or two that Jones is back.

Worse case, Jones is still on this active roster and has not been released or traded soon. And our best guess at the moment. Rashan Evans will take the biggest hit in the long run. At least based on their projected roles coming out of Atlanta lately.

Jacksonville’s LB/Edge Josh Allen has put a nice string of games together the first four weeks. And granted, the Chargers in week 3 shut him down. But in his defense, they’ve been shutting most opponents’ edge rushers down so far this season.

What’s important? He’s living up to the matchups this year. And in his three best games, he’s recorded three sacks, two forced fumbles, and 14 combined tackles. We are noting that week four’s seven combined inflates the numbers a bit. But as for his role, snap count, and consistency sit, this is a breakout start if we’ve ever seen one priming. And it may not be top tier one, but this is a great sign for a dynasty manager looking for the potential as soon as this year.

The icing on the week 5 IDP fantasy football cake? Looking ahead, all the way until they play the Raiders and Chiefs in Weeks 9 and 10. He’s matchups are all positive on paper at the moment. And it’s not only to keep a decent tackle total as an Edge play, or if he is still marked DE/DL on your site. But it’s also there for those sacks, tackles for loss, and getting pressure in the opponent’s backfield.

Commanders safety Kamren Curl returned to the lineup for the first time this year last week. Since, he’s gone for ten solos, five assists, and one tackle for a loss. And that’s likely just getting warmed up based on what we saw last year. Noting something here too. Curl also had an interception against the Cowboys in WK 4. But it was unfortunately overturned by someone else’s penalty. So it’s just a bonus indicator he looks ready to return to 2021 form sooner than later.

Curl showed IDP fantasy managers last season he could hold a tier-one defensive back value. And considering the state of the Commander’s pass rush, it looks like. He could be matchup-proof again this year. And those are fare and few between in the modern NFL.

The downside? We figure his ceiling may be capped. And that’s by the math on how much total IDP production, on average, is even available in any given contest. Because this season, ILB Jamin Davis, safety Derrick Foster. And ILB Cole Holcomb is all demanding their fair shares. Cutting production in half when it was only Curl and Holcomb showing up last year.

Talk about playing out of IDP fantasy football character this year. Not only has the Bears FS Eddie Jackson overachieved consistently. But he’s currently sitting high in many league’s defensive back standings. So we’re going to throw some water on the flame and suggest stepping back from the edge. Because if history repeats itself, the next few contests will be tough for free safety Jackson to produce. And has likely benefitted so far not from the matchups and lack of pass rushing right now by the Bears.

On paper, the last three contests. Jackson had really favorable matchups. All sitting top 12 or better at the time of the contest. And now, coming up, he has quite a few tougher matchups. Games we forecast by the current number won’t allow as much production as he’s been getting. And it’s a long dry stretch, too, reaching all through week 12 versus the Jets. Because between now and then, the Bears play the Commanders. Which are currently number one at allowing production to the safeties. But after, they have the Falcons and Patriots that are middling matchups. And the rest are currently bottom 12 as they stand so far.

Upside to breaking his IDP fantasy football ceiling? The Bear’s edge rushers aren’t coming close to getting it done. And as long as that’s the case. Jackson will have just enough upside and might be able to finish out this tough stretch as a DB2 with upside. Proving this warning, though relevant, was just a fair warning.