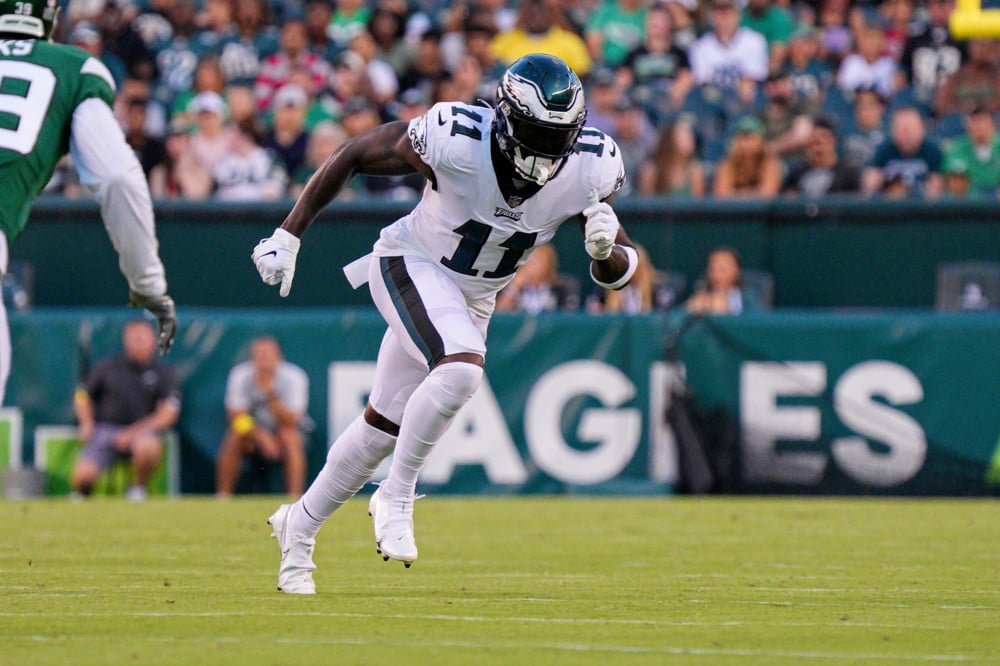 DFS scoring last week was just as insane as the finishes to some of the games. Unless you stacked the Miami-Baltimore game, you had very little chance of cashing in Week 2. That’s okay, the SGPN DFS team had you covered with plenty of alerts to the explosive upside between the Ravens and Dolphins.

NFL Week 3 suffers no shortage of great matchups whatsoever. Half of the WRs you can roster on the main slate are in line for a gargantuan game. The key will be choosing the correct contests and constructing optimum lineups using a variety of stacks to maximize upside. Let’s tee it up and get into the Week 3 NFL Flowchart! Stacking for NFL Week 3 will require some serious intestinal fortitude, followed by some scrimping and saving elsewhere to complete the lineup building. There will be no shortage of high-scoring games to choose from on game stacks, so it might behoove the DFS architect to skinny up the stacks to fit in stud WRs from other games.

Jalen Hurts is the weapon of choice in the majority of my builds, stacked with A.J. Brown and/or DeVonta Smith. Washington is a sieve in the middle of the field, exactly where Hurts and company have demonstrated maximum lethality so far this season.

I like rostering players who can hit the home run ball…the guys who can take it to the house from anywhere on the field and make a big splash in DFS. D’Andre Swift is the main squeeze this week, following up two amazing performances with almost no chalk projected in Week 3 NFL Flowchart.

Kyle Pitts is as due as my car payment right now and faces a non-existent Seattle secondary. Michael Pittman returns from an offense-crippling injury to face a truly dreadful pair of Chiefs corners who are constantly left on an island in Cover-1.

I am utterly shocked that the Jags DST is not more popular this week against the Chargers. They have been sacking the QB and forcing turnovers at a great clip so far in 2022. What makes this an even more appealing value pick are the rumors that Justin Herbert and Keenan Allen are not trending in the right direction to play on Sunday. I’ll take that shot either way at $2.3k.

The Packers have a horrible receiving corps and they’re all banged up this week. The one healthy option is rookie preseason hero Romeo Doubs from Nevada. He is a well-rounded WR who can take the top off a defense and score from in close to earn the trust of noted curmudgeon, Aaron Rodgers against a rugged Bucs defense.

You’ve heard of Elf on the Shelf, but have you seen Dortch on the Portch? If you’re rolling with “The Human Dortch” or chilling at the taco truck with a burrito de Asada with a refreshing “Dortchata” on Sunday, you can’t pass up the immense points-per-dollar value the little slot receiver provides in the Kingsbury offense. Arizona is very predictable: they will pepper Dortch with low-aDOT targets and he will pay off in PPR formats like on DraftKings.