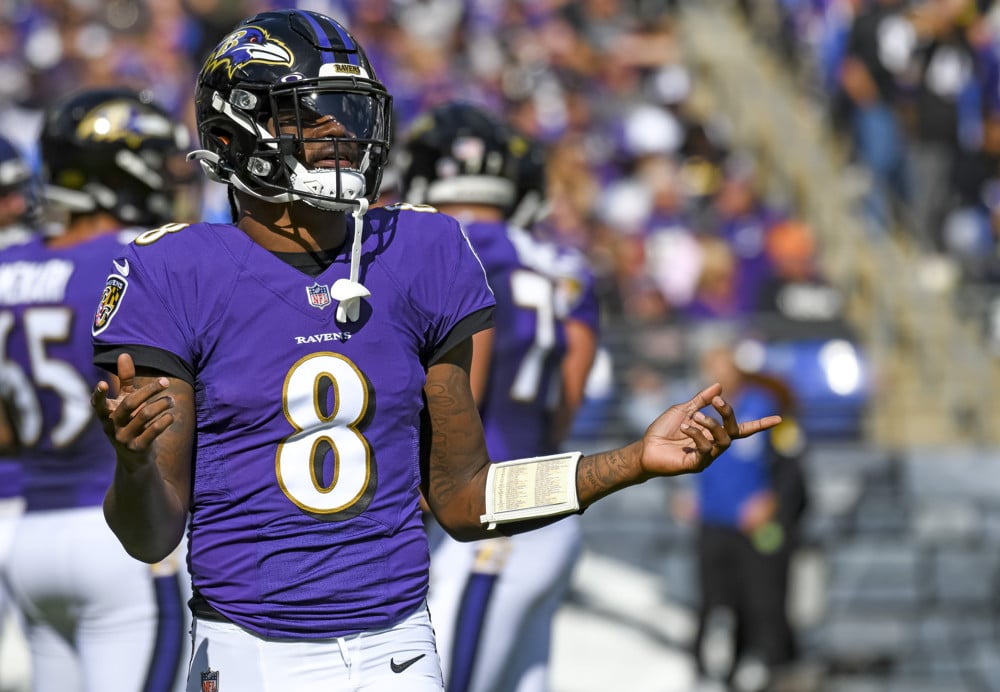 It has been quite the sweaty end to summer. We set all-time records for September heat, with temperatures reaching 116 degrees in Northern California. I also don’t think I could have lasted many more days without NFL football. The fervor and lunacy of the preseason speculations and predictions peaked over Labor Day weekend, but now we have arrived.

Week 1 is upon us, and I hope you have your DFS accounts loaded up for a huge season. The main slate is loaded with 13 intriguing games. Let me guide you through my thought processes as I build my NFL DFS lineups by hand. Funny, I use optimizers for PGA DFS but still prefer the old pen and paper for autumn Sundays. Expect some wild storylines to emanate from Sunday’s action, but you will have heard it here first. It is baffling that there are only two games of 13 on the main slate with an implied game total of 50-plus points. One of them, the Cardinals and Chiefs, is going to draw a lot of chalk (and probably fall to the under). The other is the divisional clash between the Raiders and Chargers, which should provide plenty of offensive fireworks. The tricky part about Week 1 DFS is that no one knows what will happen. Vegas is bound to be wrong about some of these games with modest implied scoring. It is our job to load up on the players in those games who will provide us the upside and leverage we crave.

One such game is the clash between the Baltimore Ravens and New York Jets. The Ravens are strong favorites at home, providing a clear game script to count on. Lamar Jackson is my top QB play this week. He has all the money in the world to play for video game numbers and chase a Lombardi. The Jets are a mere speed bump in his way. Stacking Jackson with either Rashod Bateman or Mark Andrews (or both!) is a sure way to take advantage of the narrowest receiving pecking order in the NFL.

Here’s where we can get a little wild. I think the Jets will be scoring, too, even if it’s mostly in garbage time. Elijah Moore is as matchup and QB-proof as it gets. He put up WR1 weeks last season, with Mike White and Josh Johnson throwing the ball. Joe Flacco’s arm might fall off from slinging it in the second half of this game. I also see value in running it back with Michael Carter or even Breece Hall on DraftKings for those juicy little PPR points from check-down passes.

It’s a lot of fun to hit a double stack with a run-back. It also narrows your odds of hitting a huge number on a 13-game slate. The last time I checked, we’re shooting for the moon every week in DFS. A simple skinny stack with a QB and RB, WR, or TE should suffice, as well as free up roster spots for other optimal plays.

Since I am really interested in rostering Justin Herbert this week, I will have lineups stacked with only Austin Ekeler. I prefer to double stack the WRs Keenan Allen and Mike Williams, but another skinny stack consideration for your large-field GPP tournaments is TE Gerald Everett. The ancient Jared Cook was targeted over 80 times last season, and Everett can do a lot more with the ball since he’s not 69 years old.

Another fun skinny stack from the same game is a nice leverage off the Chargers. Feel free to build around Derek Carr with Davante Adams, or, now that his new agent cured his ailing hammy, TE Darren Waller is being completely ignored at $5,400 on DraftKings. I do expect the Chargers to obliterate Las Vegas on Sunday, paving the way for Carr garbage time. If you’re thinking what I’m thinking, a cute little $4,200 RB that could make waves in the second half is Ameer Abdullah. He is a sneaky flex on a budget this week.

Not every slate has clear correlations built into a projected game script, but this one does. One way to maximize upside at the DST position is to hitch it to one of your RBs, especially if you’re thinking that team is going to be playing with a lead. This unlocks extra rushing numbers for the RB, followed by sacks and turnovers forced by the DST as they pin their ears back and attack the QB to preserve their lead.

The obvious mark here is Derrick Henry at $8,600. The New York Giants were ghastly against the run last season and haven’t exactly addressed that need in their laundry list of roster needs. The Titans are also clear favorites in this game because their front seven is destined to run roughshod through the Giants’ rebuilt offensive line. The G-Men are also completely devoid of pass-catching talent except for Saquon Barkley and a couple of gadget receivers. Last time I checked, Daniel Jones is not exactly the picture of efficiency and ball security either.

Interestingly enough, I also have Antonio Gibson slated as a correlative play with the Commander’s DST this week. Washington plays the lowly Jaguars, who still haven’t managed to field a competitive roster since Jalen Ramsey and Blake Bortles were there. Washington’s defense took a huge step back last season, mostly due to injuries along their line. Although I don’t expect them to return to their 2020 form, they should be much better this season. Trevor Lawrence has a tougher Week 1 test than many are predicting. Regarding Gibson, he is the only RB worth rostering in fantasy this week. JD McKissic is old and not even 100 percent healthy. Jonathan Williams is just there for depth. Gibby is in line for some major volume under the radar at only $5,800.

These larger slates before the bye weeks start rolling in are nice for not needing to worry too much about rostership. There are also no obvious plays that truly stand out above the rest. Tournament play usually has me focused on RB roster percentages a decent amount, but I’m more concerned with leverage stacks. This week, I am taking full liberty at what I deem are the “best plays.” So far, there aren’t any overly-chalky stacks to avoid. All of the top RBs are in play on the main slate, which means I can gobble up as many as I want under the salary cap.

D’Andre Swift is my favorite RB to play this week. The Eagles are the best team “on paper” in the NFC East and had a wonderful off-season. I still doubt their ability to stop a smash-mouth running game like Dan Campbell’s Lions will feature. I also love the idea of Swift in the passing game if the Eagles get out to a lead.

Of course, Christian McCaffrey is a great option to spend up on at RB. He’s still quite the bargain at $8,500. When healthy, CMC has always been a DraftKings cheat code. The Browns aren’t a defense I foresee as much of an obstacle to his greatness.