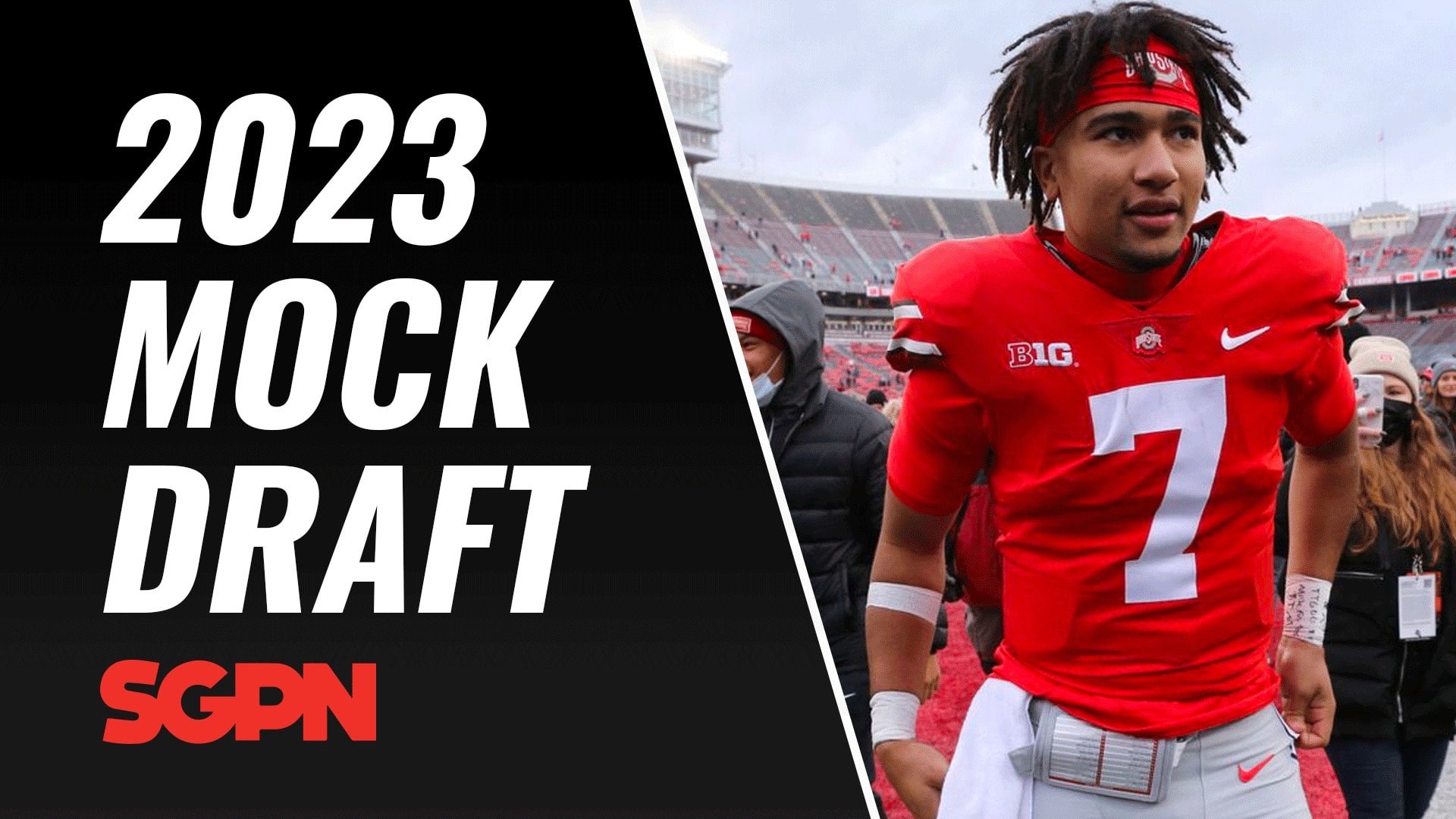 The 2023 Draft Class has everyone excited. Let’s not overreact to the handful of games already played though so let’s see where we stand and why 2023 picks hold such value. The 2023 draft class has some stud Quarterbacks, so we are going to be doing a rookie 2023 dynasty mock draft. Let’s add a little fun to this by using landing spots from our friends over at nflmockdraftdatabase.com.

C.J. Stroud stepped right into this Ohio State offense and took over. Stroud’s a special talent and his confidence bleeds into this offense. It doesn’t hurt that he has tremendous playmakers all over the field. Stroud is the front runner for the first overall pick in the NFL draft. Currently, the nflmockdraftdatabase.com has him mocked to the Atlanta Falcons.

Bryce Young took over for Mac Jones and won the Heisman on his way to a National Championship. Young also set single-season school records for passing yards and touchdowns. Young’s tools may not be as impressive as Stroud’s, however, his football IQ is highly praised. Young’s decision-making and quick processing speed are what attracted Alabama to him. This could also be what attracts the NFL to him. Right now he is currently going to the New York Giants at pick #9 via nflmockdraftdatabase.com

Bijon Robinson is one of the first mega-NIL Running Backs with a deal with Lamborghini. The hype is real with Robinson, as he is a very gifted runner. His contact balance is elite and he has all of the typical traits you are looking for in a three-down back. Robinson has the size and running ability of an early-down runner. He also has the receiving ability that has dynasty managers drooling. Don’t tell the Dameon Pierce truthers, but nflmockdraftdatabase.com has him projected as the 14th overall selection to the Houston Texans.

Ohio State has been a Wide Receiver factory and these players have been having success in the NFL. They had two first-round Wide Receivers selected in this most recent NFL draft. Furthermore, they also had Jameson Williams who transferred from Ohio State to Alabama before he was also selected in the first round. That being said, Jaxson Smith-Njigba might be the best Wide Receiver of the bunch. Jaxson has the prototypical size one is looking for and is very athletic. This allows him to produce after the catch and is a touchdown threat any time he touches the ball. Additionally, his route-running is smooth and his consistent hands make him the perfect well-rounded prospect. Look for him to be the first wideout off of the board next Spring. Right now nflmockdraftdatabase.com agrees, as they have him as the first WR off of the board as well. He is projected to go #7 overall to the Jacksonville Jaguars to pair up with Trevor Lawrence.

Jordan Addison was one of the big transfers this year. After a monster 2021 campaign and his Quarterback Kenny Pickett going in the first round, he transferred out. The big NIL deal was likely a major factor. I am sure that getting to play with Caleb Williams as well as Lincoln Riley probably didn’t hurt either. Addison has already won a Biletnikoff award and All-American honors in his career. Look for him to build on his resume with a great 2022 season. He is my second favorite Wide Receiver in this class, and nflmockdraftdatabase.com currently has him as the 3rd WR off of the board. They have him heading to the New England Patriots at pick #16 to pair up with Mac Jones.

Jahmyr Gibbs is a fantastic runner and he would most likely be the top Running Back in any other rookie class. He is another great runner who can catch as well. Gibbs gives you a lot to like and very little to dislike. Additionally, he looks the part with prototypical size and we know Alabama backs translate well to the NFL. Gibbs struggled with Georgia Tech and stepped right in as the starter in a great offense. Nflmockdraftdatabase.com has a few landing spots for him, with the Buffalo Bills being the most popular spot.

Kayshon Boutte played more like Booty against Florida State. This obviously raises a red flag, but this doesn’t bury a guy that could be the best Wide Receiver in this class. This is a long season and this is a very talented player. Expect the Tigers to do what they can to bounce back. That all starts with getting Boutte more involved and involved earlier in the games. Boutte is a great athlete with good size and strong hands. The nflmockdraftdatabase.com has him going to Philadelphia to create a dangerous trio.

Zach Evans transferred to Ole Miss and should have a brighter stage playing in the SEC. Lane Kiffin has done a nice job already rebuilding the roster around him too. Evans appears to be the centerpiece of the offense and is an all-purpose back. Evans is 6 foot even and is 215 lbs, and plays a lot like Travis Etienne. This is a quick-twitch explosive runner that is a weapon out in space. His creativity as a runner combined with his soft hands makes him a threat in the passing game.

Levis is an older prospect who will be 24 when the NFL season starts in 2023. Levis was a 3-star recruit and is more of a traditional pocket passer. Things did not work out at Penn State, but he has thrived at Kentucky throwing for 2,826 yards and 24 touchdowns. Levis is already off to a hot start with 300 plus yards and 3 touchdowns in their season opener. Levis can really help his draft stock with a strong 2022 season. Expectations are already high, and nflmockdraftdatabase.com has him going #6 overall to the Detroit Lions.

At 6’0 213 lbs, he has the ideal size your looking for in a Running Back. Tank Bigsby had his first 1,000-yard season last year with 10 touchdowns as well. Bigsby had multiple offers after entering the transfer portal before ultimately deciding to remain at Auburn. He showed this off already with a great performance this weekend averaging 9.2 yards per attempt on a big day. He had 147 yards on 16 carries and 2 touchdowns. The Atlanta Falcons are the team that the nflmockdraftdatabase currently has taking Bigsby.

Tucker is a super productive back that had an extremely impressive 2021 campaign. Tucker is an all-around player that had a combined 1,751 yards and 16 touchdowns last season. He also averaged 6.6 yards per reception last year. This season he is already off to a hot start. In his first game, Tucker had 27 touches 183 yards, and 2 touchdowns. Tucker’s 6.8 yards a touch and early breakout age could have him higher on this board by the end of the season. The nflmockdraftdatabase has him going to a few different spots, the Eagles were the top team for him.

The Volunteers have found themselves in a lot of negative headlines, they have not had a lot of talent come out. But, Cedric Tillman will be changing that. He had a massive breakout in 2021 and has already continued to shine in 2022. He burst onto the scene with 64 catches for 1,081 yards and 12 touchdowns in 2021. Tillman has the prototypical size to be an outside receiver at 6’3 and 215 lbs. His combination of size, speed, and athleticism just jumps off of the tape. He bullies smaller corners and outruns safeties, this guy is a big play waiting to happen. His numbers would be even better if he had a better quarterback play, watching him get missed wide open on Saturdays is frustrating. Right now, he is the 7th WR off of the board per nflmockdraftdatabase to the Buffalo Bills.

Thanks for checking out this 2023 Dynasty Mock Draft featured by SGPN. Check back daily for more fantasy football content.