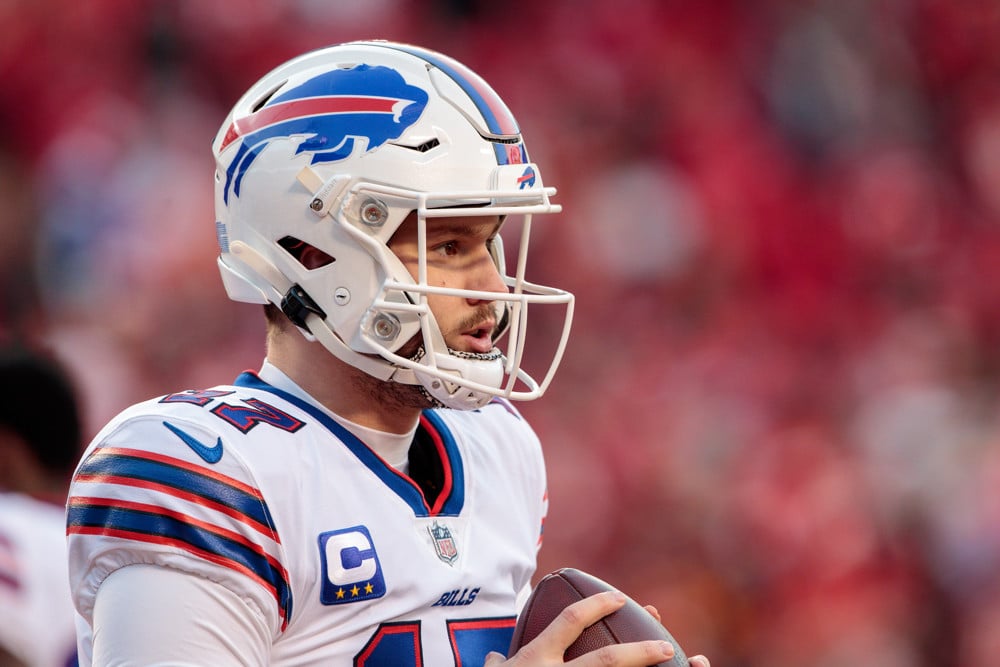 KANSAS CITY, MO – JANUARY 23: Buffalo Bills quarterback Josh Allen (17) on the field prior to the AFC Divisional Round playoff game against the Kansas City Chiefs on January 23rd, 2022 at Arrowhead Stadium in Kansas City, Missouri. (Photo by William Purnell/Icon Sportswire)

We’ve finally made it! The 2022 NFL Season starts tomorrow night, and SGPN is here with your Opening Night Betting Guide. The Los Angeles Rams host the Buffalo Bills in what many expect to be a high-scoring shootout. We’ve waited patiently all offseason for this big night, and we’ve got the best picks to get you some early profits before Sunday Kickoff. We’ll review Money Line, ATS, and Game Total Picks plus some friendly player prop options.

I’m expecting a close game to start the NFL campaign. We have a tight matchup between two teams that can both score at will and play lights-out defense. While the Bills’ offense feels upgraded with the expected progression of Gabe Davis and the addition of James Cook, they’ll be without Tre’davious White to start the season. His absence will be felt on opening night.

The Rams’ defense has playmakers at every level, including Aaron Donald, Bobby Wagner, and Jalen Ramsey. Their offense may not be as good as the Bills in totality, but it’s close enough to win this game. The Rams will be without Van Jefferson, so expect the full Cooper Kupp experience combined with the emergence of Allen Robinson.

Neither team has an advantage in running the ball. We’ll see a combination of running backs used by both teams. Both sides play the run very well, so it will be interesting to see what running back finishes with the best stats; they’ll be an x-factor in this game. The game flow should push to more passing from both teams.

Josh Allen is the best QB in the league, but I’m rolling with the home team and their edge on defense. This group will make it difficult for the Bills to close this game. I trust the Rams’ offense to score over 30 points more than I trust the Bills to reach that threshold. The Rams are +115 at WynnBet; I love me some Home Dogs!

The Rams are underdogs, so if you’re not sold on the straight-up win, you can take the discount at -110 for them to cover +2.5 points. I am taking the Rams to win the game, but I do believe this game comes down to the final procession; yes, that’s right; we’re getting all the fireworks on opening night! I would recommend buying the number up to three or even 3.5, yes, you’ll lose some value, but I see this one coming down to the wire.

The Bills’ defense is very talented even without White; they could show up late and spoil the Rams’ post-Super Bowl home opener. If the Rams were to lose, I’d still trust them to keep it close enough to cover three to 3.5 points.

You could pair this safer pick with the total or a player prop you like to earn back some of that value you discounted. You can get the Rams to cover +2.5 at Wynnbet, but heed my advice and buy the half or full point.

The game total at WynnBet is 52 points. Of course, this number is always subject to change per the public market’s demand. I’m predicting a score of 31-27 in favor of the Rams. That’s a touchdown higher than the anticipated score. I predict the teams to start slow, but we’ll see a scoring wave to end the half and through the end of the game.

Both teams will play chicken with the run game and take some practical shots downfield to start the game. Once both teams realize that it’s not there on the ground, the game flow will shift to more pass-heavy, and the points will roll in more quickly through the middle and end of the game. Worst case scenario, we hit this bet with a game-winning touchdown from either team.

The first-half total is 25.5 at WynnBet; despite even a slow start, I can easily see this game tied 14-14 or 17-14 at halftime. I’ll take the overs for both the first half and the game itself.

I absolutely love this pick, and it’s a total nod at the Bills’ defense. They will cause problems for the Rams at some point, and I’m betting Higbee can play possum and break through a deep coverage play or finish as a last-ditch target in the Red Zone. There should be a few extra targets to grab with Van Jefferson out of the game. I’m willing to go out on a limb and say that Higbee will also be the first touchdown scorer. You can get +1600 for that pick at WynnBet.

The Bills allowed the second-fewest amount of sacks last season. Shout out to their offensive line, but let’s be honest; we all know Allen has wheels and can always extend plays. His rushing upside will be needed in this one as the Rams will clog the early running lanes. I trust Allen will be needed to extend drives with his legs as the Rams’ secondary should blanket the Bills with some consistency.

Gabe Davis is starting alongside Stefon Diggs but has far more favorable coverage matchups. Davis could be the early favorite for Allen as Jalen Ramsey will shadow Stefon Diggs. That’s not to say Diggs won’t produce in this game, but it could take some time for him to break coverage with consistency. Davis is in a great position to produce early in the year as the Bills find their identity on the ground; this number is too low considering the game total, his A1 quarterback, and the coverage upside.

The Rams’ offense will also have its issues establishing the run, and for that, I love Matthew Stafford’s props for opening night. I also mentioned the absence of Tre’davious White. There’s a clear path for 300+ passing yards in this game for Stafford. I’m betting the Rams play from behind but keep the game close enough for a game-winning drive to end the game or with minimal time on the clock. Stafford has great deep threats in Allen Robinson and Cooper Kupp. All three will be needed to beat the Bills on opening night.