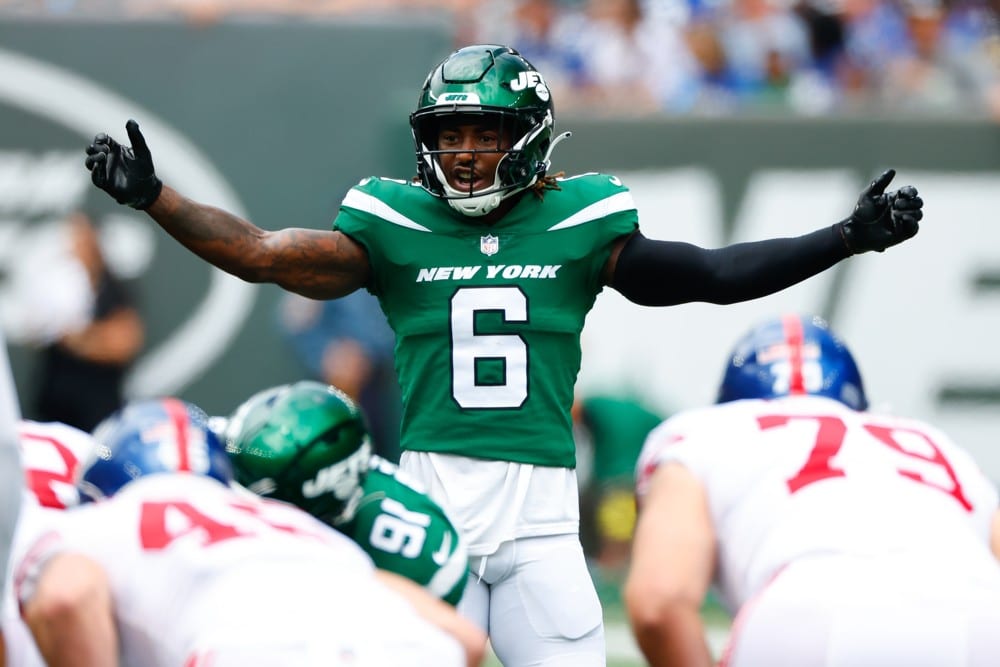 The proceeding Top 32 NFL Week 1 Fantasy Football IDP Rankings are geared towards balanced IDP settings. And will translate nicely to 99% of fantasy football individual defensive player leagues, like the popular Sleeper App, with their dual designated positions. And they also weigh in on Sleeper’s default scoring. So, these also will always translate down nicely to most IDP starting lineup formats. And they weigh heavy on matchup strengths, just as much as any player’s talent.

Are you looking for Old-School Tackle-Based fantasy football IDP rankings? No problem. For those, simply knock all NFL players with defensive line designations down. Keeping them in the same order and ranked at the end of the top 32. Where their positional values remain, but their ranks are in line when projecting overall total tackle production. And do not ever use designated defensive tackles at all in the flex spots unless it’s stud outliers, Aaron Donald or Cameron Heyward, which are well known for padding their IDP box scores. And consistently make enough of a weekly impact on top of their other related DL stats.

Don’t let any site’s week one projections fool you. T.J. Watt has the odds on odds of landing number one in balance scoring production every given week. And when we pile on his Sleeper dual designation or Edge Rusher availability. He’ll remain at the top of everyone’s rankings for the foreseeable future. And taking on divisional rivals, the Bengals, middle of the pack offensive line WK1. It’s everything we want to see kicking off the 2022 NFL season.

So how does Lavonte David land second and over fellow inside linebacker Devin White? Well, besides the fact that his role includes being the primary LB run stopper. But, also the fact his career combined tackle average also better. And proven more consistent, be it comparably a small sample size. Dallas will run the ball, as they always do. Seemingly only abandoned it when down by more than a couple of touchdowns. So expect a lot of production, as the Cowboys are very generous in 2021 ILB matchup IDP production.

If not for the rougher matchup on paper versus Tampa Bay, Micah Parsons would likely land five normally. But in this case, they are taking on Tom Brady and a top offensive line that’s very determined to protect him. And if it wasn’t for the elite skillset, anyone else not named Watt, Garrett, Or Bosa. And based on last year, they’d likely not even fallen in the top 32 at all. There is only a handful that’ll overachieve when considering the matchups. And Parsons is certainly one of them.

The time of projected ball possession has Nick Bosa landing lower than many would expect. And although the Bear’s 2021 offensive line struggled, especially when playing from behind. Overall, they limited the production of the edge to opposing pass rushers. They are going to the air more and capping off their own run game. Hence, even though Bosa will have a normal great game. The numbers support that the odds are against it’ll be supported by many combined tackles.

Aaron Donald is arguably one of the best, if not the best defensive linemen in the NFL. And again. So this is a situation where the opposing team doesn’t allow production off the edge, where Donald mainly plays. Not because of a great O-line, but because they have one of the most elusive quarterbacks in the league. Josh Allen was only sacked 3.9% of the time he attempted a pass in 2021. With PFF’s 17th-ranked O-Line. That’s only second to Tom Brady in percentage, who doesn’t come close to scrambling out of the pocket. And does have a top 5 graded O-line. Josh Allen Is elite, Donald is elite, and all Bill’s offensive line has to do, is get in Donald’s way. Which has to be the biggest part of any team’s game plan, double-team block, Donald.

We’ve got to highlight Jordan Whitehead in this week one fantasy football contest versus the Ravens. This positively graded IDP play has only been serviceable in deeper formats in the past. Playing deep for Tampa Bay at FS, his role will be way more involved with the Jets. And if there is a “sneaky” week one play. Or dynasty play at DB this season, Whiteheads is your guy. Because after week one, if he’s not on someone’s roster, it’ll be a fight to get him off the waiver wire. Especially when the Ravens ended 2021 allowing top 5 productions to the opposing team’s secondaries.

A week one fantasy football matchup made in heaven, on paper. And apparently, Trey Hendrickson loves playing the Steelers. Last season in two contests, he recorded two sacks and multiple tackles. Recording some of his best stats in two divisional contests, he only saw around 55% of the snaps available. So, unless this Steelers’ offensive line. Or newly named starting and rethreaded QB Mitch Trubisky have both taken a huge step, which is highly doubtful at this point. Hendrickson has one of the hottest edge matchups “on paper” in week one.