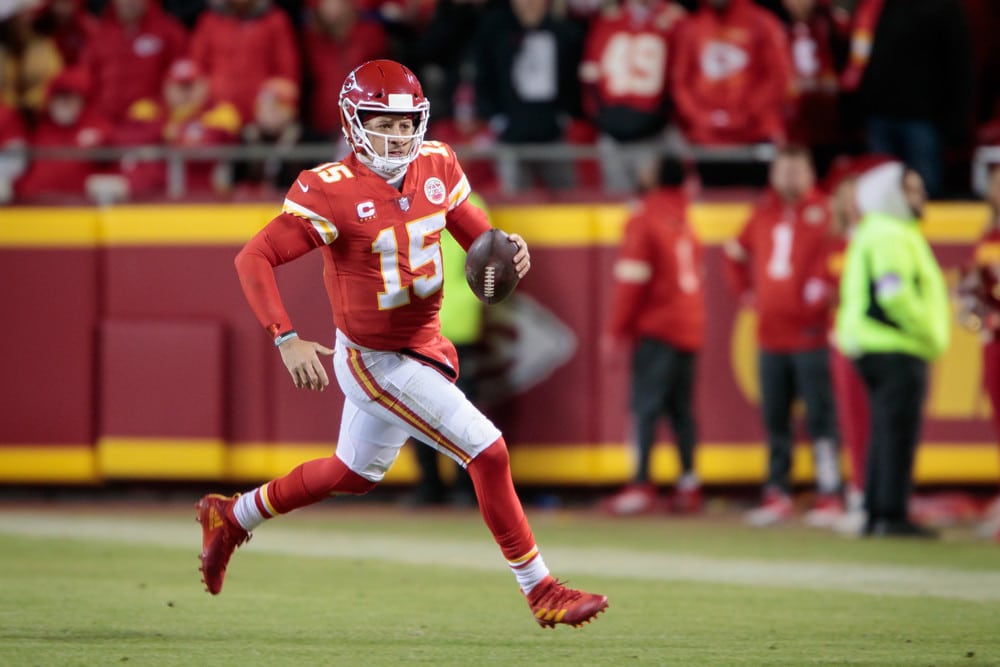 The NFL season is almost upon us! The preseason is over, and rosters have been trimmed down to 53 players. Now we just wait for the Buffalo Bills at Los Angeles Rams game that kicks it all off on Thursday, September 8th. You’ve already placed your win total bets, your Super Bowl winners, and your favorite team over wins. Go here for the latest Super Bowl odds.

Now it’s time to get a little crazy and a little different with some fun “season specials” bets. We are all looking for that extra fun thing to watch out for, root for, and show off to our friends “look at this crazy bet I hit!” So here they are.

First Quarterback With 5 Passing Touchdowns in a Game

Our friends over at WynnBET (Bet $100 on WynnBET and get a $1,000 free bet) are offering this fun prop. Five different Quarterbacks threw for five touchdowns in 2021, with Patrick Mahomes completing the feat twice. Jameis Winston was the first one to get it done, opening the season week one with a stunning defeat of the Green Bay Packers 38-3. Tom Brady then went on to do it in week two.

If I’m going to pick one of the guys towards the top of the board. Patrick is just too good to pass up. He is the only player to do it twice last year. Tyreek hill is gone. However, Travis Kelce is still around, JuJu Smith-Schuster has been added to the team, and deep field threat Marques Valdez-Scantling also joined the team in the offseason.

With no set star running back and the way, Andy Reid likes to cook up motion shovel passes. A week one game against the Cardinals, and week two on Thursday night against the Chargers. Both games should have high totals and explosive offenses if he’s unable to do it in week one; week two presents another great opportunity.

In 2016 Lamar Jackson won the Heisman Trophy award in college. Three years later in 2019, Jackson was the NFL MVP. Three years later is 2022; now it’s time for Jackson to hit this 50/1 bet and make us a little money! In that 2019 MVP season, Jackson had three games in which he threw 5-touchdown passes. One of those was in week one, and another one of those was against the New York jets. In week one this season, the Ravens play those same New York Jets.

The Jets had a nice draft back in April, and that’s been about it. They look to be a dumpster fire of a team that is probably starting former Ravens quarterback Joe Flacco in week one. Jackson is looking to return to MVP form as he negotiates to become the highest-paid player in NFL history. At 50/1, there is too much value in these odds.

In 2021 the Arizona Cardinals started the season red hot. 6-0 to open it up before a 24-21 week seven loss to the Green Bay Packers that came down to the last second of the game. In 2020 the Pittsburgh Steelers surprised everyone starting the season 11-0 before losing four of their last five games this season. The last time the team who was the last remaining undefeated team went on to win the Super Bowl was back in 2006 when the Indianapolis Colts started the year 9-0 en route to the title.

Jalen Hurts CAN throw it deep. Instead of having Reagor hauls these in it will be Aj, DeVonta, or Quez now pic.twitter.com/WbkxT5xfd4

For the last two years, we’ve seen somewhat unexpecting teams as the last remaining undefeated. Here’s the case for the Philadelphia Eagles. Jalen Hurts enters year two as the full-time starter with a loaded offense. A.J Brown was brought in after a blockbuster trade on draft night. Lane Johnson and Jason Kelce are back to anchor the offensive line. Darius Slay, Fletcher Cox, and more are on an improved defensive side of the ball.

The Eagles’ 2022 schedule is the third easiest of the 32 teams, according to CBS.COM. Opening the season at the Detroit Lions as 4-point favorites, week two is a tougher match against the Minnesota Vikings. A look-ahead line has the Eagles as 2.5-point favorites in this one. If they can get past Minnesota, it’s at the Washington Commanders where they’ll want to prove why they moved on from Carson Wentz by showing him up.

The Jacksonville Jaguars come to town in week four; while I am higher on them, this should be another easy win for the Eagles. In week five, the team heads to Arizona to face the Cardinals. Arizona should prove to be a tough opponent, but if the Eagles can get past them, it’s the Cowboys, Steelers, Texans, Commanders again, and Colts.

At 9-0, the Eagles are then put through a tough ringer of games with the Packers and Titans up next. 9-0 feels like it should be good enough to be the last unbeaten. Based on their odds (14/1) and their schedule, the Philadelphia Eagles seem like the bet that makes the most sense.

Let’s flip to the other side of the card now and look at the bad teams. Which team will go the longest without winning a game? In 2021 the Detroit Lions went 0-9-1 before finally getting a win over the Minnesota Vikings on December 5th. In 2020 Jets started 0-13, in 2019 the Cincinnati Bengals began the season 0-11. Who will have the worst start to the 2022 season?

Zach Wilson's third interception of the first half.

I already stated above that I’m not impressed with this year’s New York Jets. At the same time, they did have a great draft snagging three players in the first round, CB Sauce Gardner, WR Garrett Wilson, and DE Jermaine Johnson. In addition to RB Breece Hall in round two. These are great building blocks. But the overall product for the jets hasn’t seemed to improve.

Second-year QB Zach Wilson suffered a meniscus and bone bruise injury to his knee during a preseason game. After struggling in his rookie season and now missing critical time to prepare for the season. Out for week one against the Ravens and probably even longer. The team will be in aging veteran Joe Flacco‘s hands for the time being.

The 2022 season starts with that game against the Ravens. Week two sends the Jets to Cleveland to face the Browns. While the Browns have their issues, they should still be the better team, even without suspended QB Deshaun Watson. The Bengals made the Super Bowl last year; then it’s the Pittsburgh Steelers. Pittsburgh should have a pretty solid team, even with questions at Quarterback. Their coaching more than makes up for any lack there.

The Dolphins come to New Jersey in week 5. If the Dolphins can survive the Jets, it’s the much better Packers and Broncos next. The Patriots have owned the Jets, winning 34 of the last 44 games against them dating back to 2000. Buffalo Bills week nine are projected to be one of the best teams in the NFL. Week 10 is against the Patriots again, then the Bears, Vikings, and Bills.

The Jets will most likely be underdogs in all of those games. The 14th game of the season against the Lions could very well be the first time we see the Jets with a chance to win. I’d also take the team with the worst regular season record (+900).

In 2021 the Dallas Cowboys led the league in scoring, putting up a total of 530-points throughout the regular season. Tampa Bay was second with 511, the Bills scored 483, and the Chiefs scored 480.

This Chiefs team is being underrated. Tyreek Hill leaves town, and all of a sudden, everyone is acting as if the sky has fallen. Offensive genius Andy Reid and extraordinary playmaker Patrick Mahomes haven’t gone anywhere. The Cowboys were playing from behind a lot and trying to score to keep up. Last year’s pace isn’t reasonable to expect from this team again this year.

Tampa Bay has some serious question marks with the odd absence of Tom Brady, the loss via free agency, and injury to their offensive line. Gronk retired, and Chris Godwin is an injury question. The Buffalo Bills would seem to be the biggest rivalry with the Chiefs, and the teams were within 3 points of each other last year.

Offensive Coordinator Brain Daboll left the Bills to take the head job with the Giants. If it’s a toss-up between these two, give me Reid, Mahomes, and the better odds.