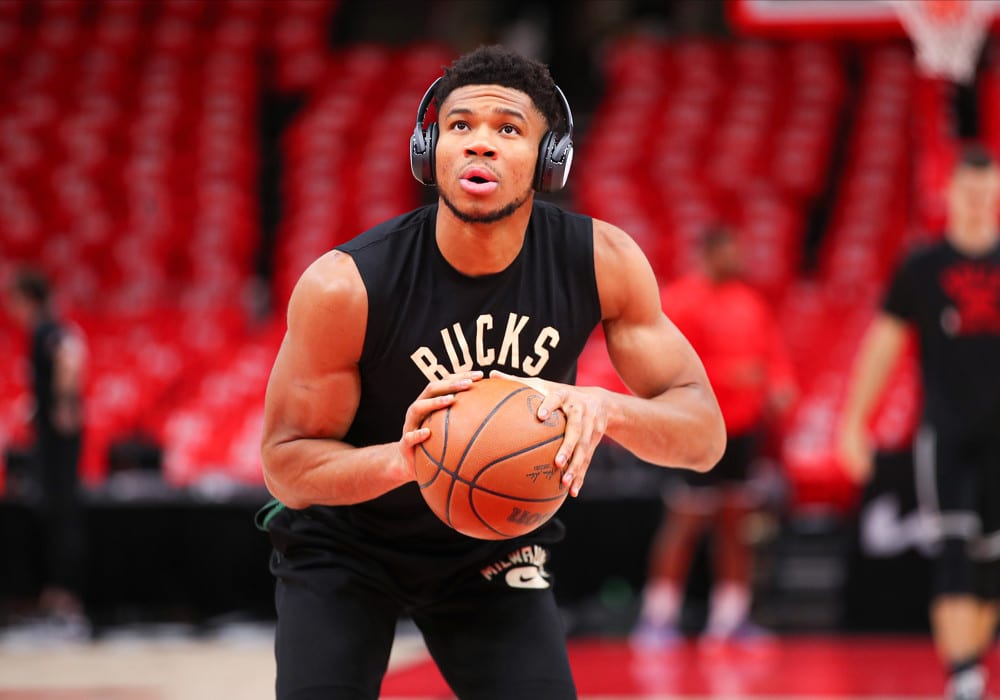 CHICAGO, IL – APRIL 24: Milwaukee Bucks forward Giannis Antetokounmpo (34) looks on before attempting a free throw before Game Four of the Eastern Conference First Round Playoffs between the Milwaukee Bucks and the Chicago Bulls on April 24, 2022 at the United Center in Chicago, IL. (Photo by Melissa Tamez/Icon Sportswire)

The month of August has come and gone which means we are just one month away from NBA preseason basketball! The preseason is set to tip off at the end of September which means we still have a month to take advantage of some favorable NBA futures odds. Let’s look at which teams are undervalued on the futures market! Below are a few NBA Futures I like for the upcoming NBA season!

Make sure to check out all the College Football and NFL Betting Picks for the season!

The Milwaukee Bucks came up short in their effort to repeat as NBA Champions in 2022. They were knocked out in the 2nd Round of the playoffs by the Boston Celtics in 7 games. They led that series 3-2 before falling short in back-to-back closeout games. The Bucks were able to re-sign the majority of their guys that were up for contract years in Bobby Portis, Pat Connaughton, Wesley Matthews, and Jevon Carter. Additionally, they didn’t lose anybody from their core rotation to free agency.

The main addition for Milwaukee this upcoming season will be the return of Khris Middleton. Middleton went down in the middle of the 1st Round series against the Chicago Bulls with a wrist injury. Giannis Antetokounmpo was able to average 34 points, 15 rebounds, and 7 assists against the Celtics in that 7-game series. However, he wore down towards the end of that series in a big part due to Middleton not being able to help carry the scoring load.

If Milwaukee can remain healthy in 2022-2023 then they will be right there to get back to the NBA Finals. Currently, they are being valued behind Boston and Golden State for the NBA Finals odds. I think there is value because this team has the depth, size, and arguably the best player in the NBA. The Bucks are primed to get back to the Finals in June and have a chance to win another ring! I love this NBA Futures bet!

On this day 1 year ago, Giannis Antetokounmpo had the GOAT closeout game

To lead the Milwaukee Bucks to an NBA Championship and get his first ever Finals MVPpic.twitter.com/9l5vS2yjMr

The Memphis Grizzlies made a big jump in 2022 before falling short to the Golden State Warriors in 6 games. PG Ja Morant had an MVP-like year in year 3 averaging 27 points, 7 assists, and 6 rebounds. Morant went down with a knee injury in Game 3 of that Golden State series but will be ready to go for the 2022-2023 season. The Grizzlies were able to have success whenever Morant was not healthy going 21-6 in the 27 games he was sidelined.

The main move Memphis made in the offseason was trading away De’Anthony Melton for the veteran shooter, Danny Green, and the 23rd pick. The Grizzlies have had a lot of success in previous drafts and on paper, this one looks like a solid one as well. Memphis used their 4 picks on to add depth to their roster with Jake LaRavia (19th), David Roddy (23rd), Kennedy Chandler (38th), and Vincent Williams (47th). In addition to these draft picks, they were able to re-sign Tyus Jones.

The Grizzlies have a very good young core that is looking to take another big step in 2022-2023. Memphis has the size, athleticism, and depth to make another run in the loaded Western Conference. They won 56 games last year with Morant being out for a good portion of the season. I like Memphis to repeat their success and win 50+ games and have a chance to win the Western Conference if they can stay healthy! This is an NBA Futures bet for the Western Conference that I love!

The Memphis Grizzlies have 18 nationally televised games this season. 28 if you count NBA TV.

The Toronto Raptors are coming off a 48-34 season after a 1st Round exit to the Philadelphia 76ers. Toronto was hurt by injuries to multiple guys in their rotation but still was able to grind out 48 wins. The Raptors found a way to stay in contention for home-court all the way to the end of the season. Pascal Siakam had another monster year averaging 23 points, 9 rebounds, and 5 assists on the season.

It was mainly a quiet off-season in Toronto. The Raptors added Otto Porter Jr. and Josh Jackson to add depth to their wing position. Additionally, they were able to bring back Chris Boucher. The only guy they lost from their roster last year was Yuta Watanabe.

The Raptors have a winning culture and showed it last year by managing to make the postseason despite all the injuries. They still have the size and athleticism on the defensive end to carry them throughout the season. I like for Toronto to lean on that depth and defense and get back to hosting home court in the playoffs. I love this NBA Futures bet on the Toronto Raptors in the East!

The Denver Nuggets finished the 2021-2022 season at 48-34 overall after falling in 5 games to the Golden State Warriors. Denver was hammered by injuries in 2021-2022 with Jamal Murray missing the entire season and Michael Porter Jr. virtually missing the entire season. The Nuggets were still able to manage 48 wins due to another MVP season from Nikola Jokic. Jokic was sensational averaging 27 points, 14 rebounds, and 8 assists.

Denver was active this offseason with the shopping of multiple players. The Nuggets traded Monte Morris and Will Barton to Washington in return for Kentavious Caldwell-Pope and Ish Smith. In free agency, they were able to Bruce Brown Jr. and DeAndre Jordan.

The Nuggets should improve from their 48-win total simply if they just stay healthy. The return of Murray and Porter will help Jokic over the course of an 82-game season. I like Denver to push to be one of the best team’s in the Western Conference this upcoming season and get to winning over 50 games. I love this NBA Futures bet on the Denver Nuggets.

The Denver Nuggets are finalizing a deal to hire Andre Miller as the new coach of the G League Grand Rapids Gold, sources tell ESPN. Miller played six seasons for Denver during his NBA playing career.