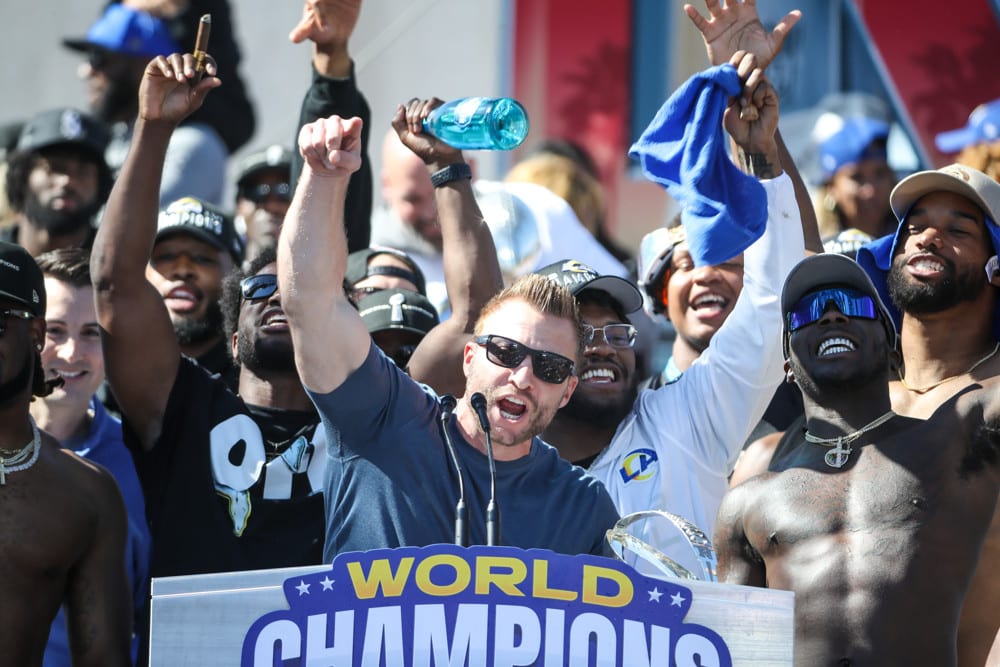 The NFC West enters the 2022 NFL season with high expectations and a lot of uncertainty. The NFC West is coming off a historic playoff run, where the division didn’t lose a single game to an opponent outside of the division. The Los Angeles Rams are coming off their Super Bowl run after beating the San Francisco 49ers in the NFC Championship and Arizona Cardinals in the Wild Card Round.

The Seattle Seahawks were the only team that missed out on the playoffs in the division. Additionally, Seattle traded away Russell Wilson in the offseason. Let’s look at the projected win totals and give out some best bets and the division winner!

The Los Angeles Rams were the last ones standing in 2022 after defeating the Bengals in Super Bowl LVI. Los Angeles won 9 of its final ten games after dropping 3 in a row at the end of November.

Offensively they were led by Matthew Stafford and Cooper Kupp. Stafford threw for 41 touchdowns and nearly 5,000 yards. Meanwhile, Kupp led the NFL in receiving with almost 2,000 yards, soon 145 catches and 16 touchdowns. The defense was dominant in the playoff run behind the stellar play of Aaron Donald and Jalen Ramsey.

The Rams did lose multiple contributors to their Super Bowl team in Odell Beckham Jr. and Von Miller. However, the Rams were able to fill roster voids with the signings of WR Allen Robinson and LB Bobby Wagner.

The expectation in LA is for the Rams to repeat as champions. Their roster is loaded on paper, but their depth stills remains a question with their decisions to ignore the draft over the last couple years. I think this is the year that the lack of depth finally catches up with the Rams and they don’t meet the high expectations.

The San Francisco 49ers came up one game short of getting back to the Super Bowl. San Francisco fell to their division rivals, the Rams, after blowing a 10-point lead in the 2nd half. The 49ers caught fire down the stretch, winning 7 of their final nine games to get into the playoffs. The Niners then rode that momentum into postseason play with playoff upsets over Dallas and Green Bay.

Offensively, Deebo Samuel was the horse for San Francisco in their playoff run. He finished 2021 with over 1,400 receiving yards as well as 6.2 yards per carrying on the ground. On the defensive side of things, Nick Bosa returned from his ACL injury with a monster year. He recorded 15.5 sacks and 21 tackles for loss.

The big move for the 49ers in the offseason was the decision to move on from Jimmy Garoppolo for Trey Lance. The Niners lost key pieces on their offensive line in Alex Mack and Laken Tomlinson. San Francisco added more depth to their already good defensive line with the additions of Kerry Hyder, Kemoko Turay, and the drafting of Drake Jackson.

The Garoppolo drama dominated the offseason headlines for San Francisco. Their biggest question mark is at the most important position with the development of Trey Lance. However, the rest of their roster is in win-now mode. I like for Lance and the 49ers to be more creative offensively under Kyle Shanahan this year. I also like San Francisco to continue their late-season momentum last year and win the West this year!

The Arizona Cardinals finished the 2021 season after going 11-6. Arizona was dominated by the Rams in the Wild Card round to end their season. The 11-6 was a disappointment due to the team losing 5 out of its final six games after a 10-2 start. After back-to-back late season collapses, this sets up a critical year for Cliff Kingsbury and QB Kyler Murray.

Statistically, Kyler Murray put together another solid year for the Cardinals. Murray was the front runner for the MVP at the halfway point before declining in December and January. He finished with 3,700 passing yards over 400 yards rushing. Over on the defensive side of things, the defense was solid early on. They were able to lean on their pass rush duo of Chandler Jones and JJ Watt because they were playing with a lead. They were not the same defensively after Watt went down with an injury.

The Cardinal’s offseason was headlined by the Kyler Murray contract extension drama. At the Wide Receiver position, they let Christian Kirk go and replaced him with Marquise Brown. They lost pass rusher Chandler Jones to free agency on the defensive side. In the draft, they added TE Trey McBride and pass rushers Cameron Thomas and Myjai Sanders.

The Cardinals enter 2022 as one of the bigger mystery teams. Not having WR DeAndre Hopkins to start the season does not help things for a team that depends on fast starts. I think the offensive line question marks stand out this year, and they have issues protecting Murray. I like for this to be the last year of the Kingsbury-Murray duo in Arizona.

The more you can do. pic.twitter.com/W2f7h3Fzpn

The Seattle Seahawks finished 2021 at 7-10 overall. The big news in Seattle was the decision to move on from QB Russell Wilson. Wilson had been the face of the franchise for the last decade when they drafted him in 2012. Geno Smith steps in for Wilson after winning the job of Drew Lock. Seattle underperformed their Pythagorean Win total by two games.

I look for this to be a very conservative team with Geno Smith at quarterback. They will look to rely on their running game and defense. In 2021 the Seahawks averaged 5.0 yards per carrying. In the four games Smith appeared in, he threw for 175 yards per game with five touchdowns and just one interception. DK Metcalf and Tyler Lockett provide two solid options for Smith in the passing game.

Additionally, the defense lost key pieces in Bobby Wagner and DJ Reed. Pete Carroll hopes going younger will benefit this unit throughout the season. The Seahawks had a big draft where they added a pair of tackles in Charles Cross and Abraham Lucas. The Seahawks also added pass rusher Boye Made and running back Kenneth Walker III.

Expectations are low in Seattle, but that might not be a bad thing for Carroll and the Seahawks. I think this team will be able to play a throwback brand of football where they rely on their running game and defense. I like for the Seahawks to be a young competitive team and get better throughout the season!