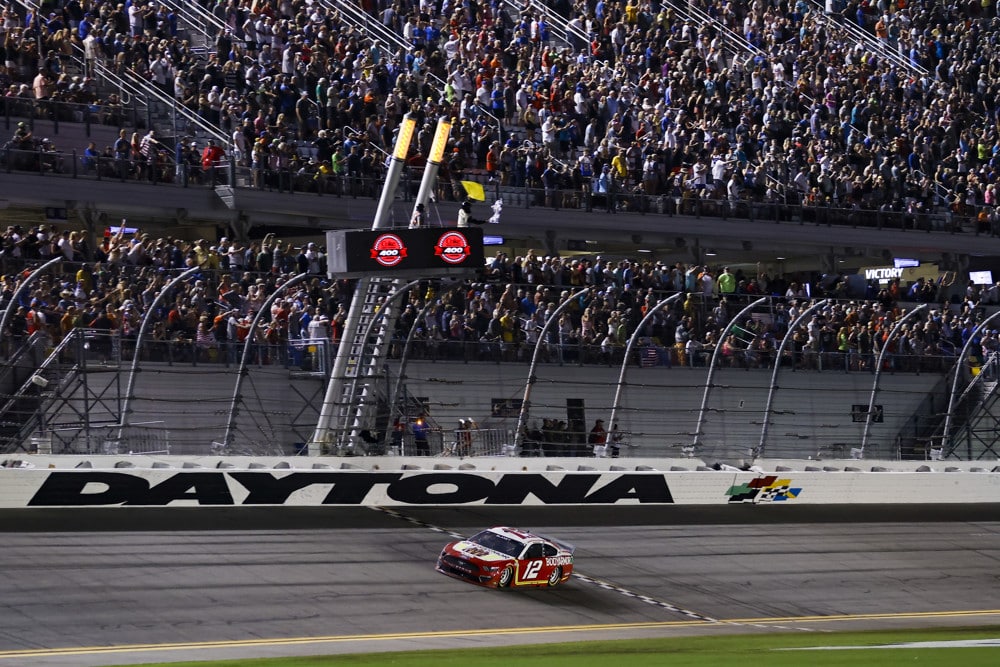 The tension ramps up with one race before the playoffs as NASCAR heads to Daytona for the Coke Zero Sugar 400. This 2.5 mile asphalt tri-oval is located in Daytona, Florida and has been hosting NASCAR events since 1959. Better known for the Daytona 500 that kicks off the NASCAR season, Daytona has host over 150 Cup Series events. “The King” Richard Petty holds the record for most wins at Daytona with 10 trips to victory lane. Amongst the active drivers, Denny Hamlin has the most wins at Daytona with 3 victories. Earlier this season, rookie Austin Cindric took home his first career Cup Series win in the Daytona 500.

This week’s NASCAR DFS slate should be exactly like super speedway racing: unpredictable. There are trends to look at and some questions you should ask yourself when setting your DFS lineups. Will Chevrolet continue to show the incredible speeds on super speedways? Can Toyota gain strength heading into the playoffs? Can Ford sweep the races at Daytona?

First driver to pay up for at Daytona is Chase Elliott. Yes, Elliott is more known for his driving skills on road courses and intermediate tracks, but don’t overlook him. The driver of #9 Chevrolet finished 10th at the Daytona 500. In his last five trips to Daytona, Elliott has four top 10s, two being 2nd place finishes and an average finish of 7.8, which is the best in the Cup Series. In the two super speedway races this season, Chase is one of three drivers to record a top 10 in both races. He’s also got an average finish of 8.5, which is 4th best this season. Chase Elliott should be a driver you pay up for in the Coke Zero Sugar 400 this weekend.

There are a couple reasons why Ryan Blaney should be a driver you pay up for at Daytona this weekend. First, he finished 4th place earlier this season at Daytona and led 36 laps. He’s also been really good at Daytona in his career. Blaney has a win, three top 5s, and four top 10s, which is tied for most top 10s in the Cup Series. The driver of the #12 Ford has been really on strong on the super speedways in general. His average finish of 7.5 is tied for the 2nd best. The second reason is that Blaney can lock up a playoff birth with either a win or a good points day if we don’t get a new winner. There’s a lot of motivation right there and that’s why you should pay up for Ryan Blaney in your NASCAR DFS lineups.

Another driver to pay up for in the Coke Zero Sugar 400 is Kyle Busch. In the 2022 Daytona 500, Kyle led 28 laps to a sixth place finish. Interesting enough, that was his best on the super speedways this season. At Talladega, he finished inside the top five, making him one of three drivers with a top 10 in both super speedway races. Another stat that bodes will for the driver of the #18 Toyota is his average finish. Kyle Busch’s average finish of 4.5 of the super speedways is the best mark in the Cup Series this season. Toyota has been struggling, but Kyle Busch should a driver you pay up for at Daytona this weekend.

Great day to have a great day 😎#DAYTONA500 pic.twitter.com/PhfT0RMV5y

The first driver to consider for this weekend’s Coke Zero Sugar 400 is Bubba Wallace. In the last five races at Daytona, Bubba has three top 5s, including his 2nd place finish this season. He even led 12 laps in this year’s 500. Wallace’s average finish of 8.2 at Daytona in the last five races is 3rd best. Although he’d fair too well at Talladega, his stats at Daytona say Bubba Wallace is a driver to consider this weekend.

One driver to consider at Daytona this weekend is Michael McDowell. The driver of the #34 Ford has some success previously at Daytona. In 2022, he placed 7th and won the 2021 Daytona 500. In 2022, McDowell is one of three drivers to get a top 10 in both super speedway races. His average finish of 7.5 is tied for the 2nd best average int he Cup Series. The stats say Michael McDowell is a driver to consider for your DFS lineups for this weekend’s Coke Zero Sugar 400.

Stay away from Cole Custer this weekend at Daytona. The driver of the #41 Ford has one top 15 finish at Daytona in his last five starts and finished 20th earlier there this season. In fact, Custer has only led one lap of the possible 939 in the last five starts. Let’s just say he rarely finds himself at the front at Daytona. On the super speedways in general in 2022, Custer has yet to record a top 15. All signs say that Saturday night could be a struggle for Cole Custer and therefore, owners should avoid him in their DFS lineups.