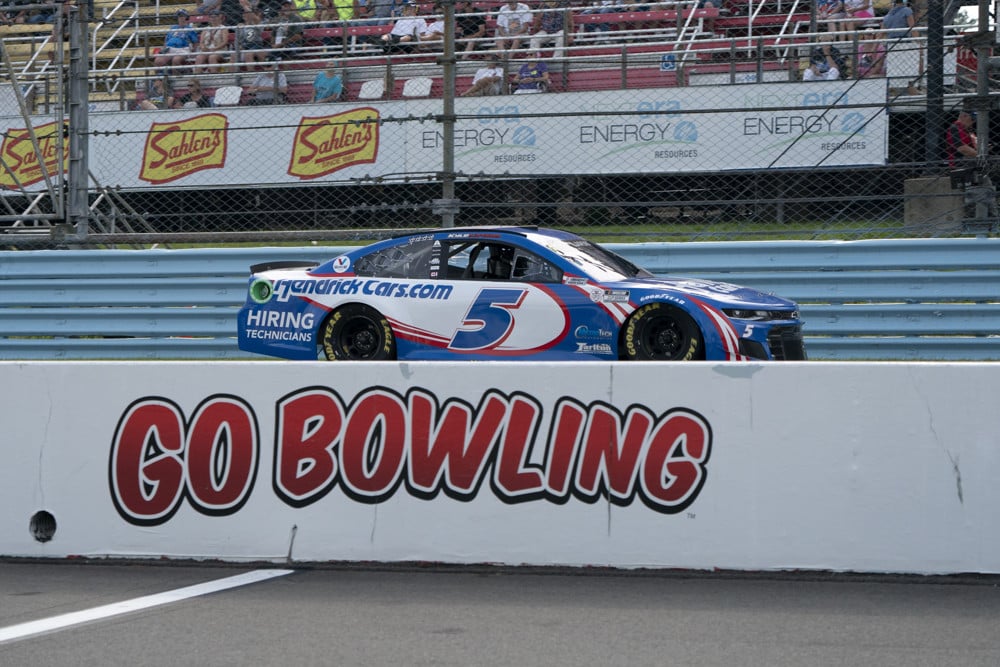 Get ready to set your NASCAR DFS lineups for road course racing as NASCAR heads to Watkins Glen International Raceway for the Go Bowling at The Glen. This 2.45 mile asphalt rack is located in Watkins Glen, New York and has been hosting NASCAR events since 1957 when Buddy Baker won the inaugural Cup Series race. Built back in 1956, “The Glen” has hosted winners the likes of Rusty Wallace, Jeff Gordon, and Tony Stewart. Last season, Kyle Larson won this race on his way to his first and only career NASCAR Cup Series Championship.

This week’s NASCAR DFS slate should be an interesting one as Watkins Glen has become a favorite amongst drivers because of the high speeds and hairpin turns. There are some questions you should be asking yourself when setting your lineups this week. Will Chevrolet continue their dominance of the road courses? Can Toyota figure out something and return to the road course with some speed? Will Ford make it three race wins in a row?

Coming into 2022, Chase Elliott would be at the top of any DFS owner’s board at a road course. Although Elliott hasn’t won any of the four road races this season, he hasn’t been too shabby. The driver of the #9 Chevrolet has two top 5s and three top 10s in the four road course races this year. Elliott also has an average finish of 7.5 in the road course races in 2022, which is the 2nd best average. Chase is tied for the most led laps on the road courses this season. He’s been the strongest driver in the Cup Series this year no matter the track type. Four wins, nine top 5s, and 16 top 10s have Elliott sitting atop the Cup Series points standings. Chase Elliott hasn’t been dominant like many thought, but he is still a driver that every week DFS owners should pay up for.

The hottest driver on the road courses is Tyler Reddick. The driver of the #8 Chevrolet has won the last two road course races and has a top five in the other two. Reddick’s average finish of 10.5 road courses this season makes him an instant start. Tyler has put together his best season of his career with two wins, seven top 5s, and nine top 10s. In the last eight races, he’s finished inside the top two on three different occasions. You got to ride the hot hand in your lineups and Tyler Reddick is a driver you should pay up for.

Another driver to pay up for at Watkins Glen is Ross Chastain. When “The Watermelon Man” hasn’t been wrecking other drivers, he’s put together a great 2022 season. On the road courses, Chastain has a win, two top 5s, three top 10s, and an average finish of 9.8. The driver of the #1 Chevrolet has two wins, 10 top 5s, and 14 top 10s on the season. In the last 10 races, Chastain has six top 10s, so he’s heading into Watkins Glen with some confidence. When setting your NASCAR DFS lineups this weekend for the Glen, owners should pay up for Ross Chastain.

The stats say Austin Cindric is a driver to consider for The Glen this weekend. Cindric has been the most consistent road racer this season. In fact, the driver of the #2 Ford is the only driver in the Cup Series to score a top 10 in all four road course races in 2022. His average finish of 5.5 is the best in the series as well. Outside of the road courses, Cindric has been up and down. He’s got a win, four top 5s, and seven top 10s. However, in the last nine races, Austin has five top 10s. Austin Cindric has shown he knows how to race on the road courses and therefore he’s a driver you should consider for your DFS lineups.

Another Ford driver to consider for the Go Bowling at The Glen is Chris Buescher. Buescher has surprised a lot of people, including myself with his top 5 and three top 10s on the road courses this year. The driver of the #17 Ford also has an average finish of 9.8 on the road courses, which is tied with Ross Chastain. Buescher is also riding a bit of a hot streak lately. In the last three races, Chris has two top 10s and shown he can be racing for the win at the end. I really like Chris Buescher at Watkins Glen and he should be a driver you consider for you DFS lineups.

ADVANCE: RFK Racing heads to New York for the fifth road course race of the season. 💯

Stay away from Corey LaJoie this weekend at Watkins Glen. Although Corey is one of my favorite drivers, he’s not really shown up at road courses this season. In four road races, the driver of the #7 Chevrolet has yet to record a top 15. His best finish came just a couple weeks back at the Indy Road Course, when he finished 18th. LaJoie’s average finish on the road courses in 2022 is 30.5, which is the worst in the Cup Series amongst drivers that have competed in all four races. 2022 has not been kind to Corey LaJoie. He has one top five and in his last 14 starts, he failed to finish inside the top 15. Again, I like Corey LaJoie but he is definitely a driver to avoid this weekend at The Glen.