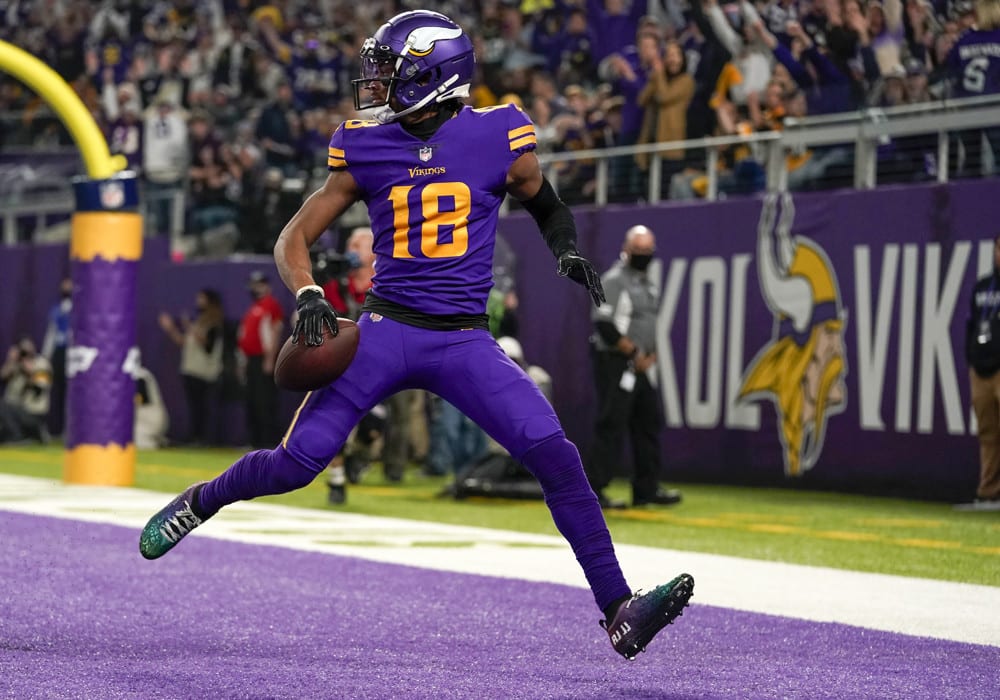 By now you may have already completed some fantasy football drafts. The preseason is underway as we start seeing the first released depth charts after months of speculations. However, even if you haven’t drafted, what if you’re looking at your dynasty team and wanting to make some changes? What’s the best way to go about ranking the trade value of your players? We’ve created the fantasy football dynasty trade value chart to help you weigh all your fantasy football trade questions.

Asides from highly sought-after Jonathan Taylor, which players are the most valuable to your dynasty team? Which players can you pair together from this chart to make a good argument to your league mates for one of their higher ranked players? This chart can be used to justify why you think a trade is (or isn’t) fair value in your dynasty leagues.

If you haven’t reviewed our Fantasy Football dynasty trade value chart before, here’s a little on the methodology. First, the rankings system we use takes FantasyPros best, worst and average rankings. We also throw in a little standard deviation to count all variables.

It’s no surprise that Josh Allen will stay on the top of the fantasy football trade value chart for quarterbacks. The only way his value will be affected is if he is injured or his average points per game start slipping. He’s 26 years old and last year averaged more than any other quarterback in the league. Also age 26, Patrick Mahomes is close in value. However, he scored fewer points per game than Allen. Therefore he has a little less value with our formula. Tied with Mahomes, Justin Herbert has similar average points per game but is slightly younger. Lamar Jackson hopes to bounce back this year after missing some games due to injury and is ranked fourth on the trade value chart. Lastly, Kyler Murray pushes his way back past Joe Burrow, which happened because he’s started climbing up the rankings.

It should come to no surprise to anybody that Jonathan Taylor remains on the top of the entire fantasy football trade value chart. He is only 23 years old and averaged the most points per game last year. Remaining in second place, Najee Harris will adjust to a new quarterback handing him the ball, but I expect he’ll make an even bigger impact this year out of the backfield. Christian McCaffrey is still one of the most talented backs as long as he’s healthy, which has been a question mark the past two years. He sits at number three among running backs.

Hot on his tail is Austin Ekeler, who proved last year he is a very capable do-it-all back. In fifth place, slipping slightly down the fantasy football trade value chart, but with the same trade value, is De’Andre Swift. He will look to put the Lions on his back and help them turn the corner from their 3-13-1 year last year.

The closest player to the top not named Jonathan Taylor on the fantasy football trade dynasty value chart is Justin Jefferson. Jefferson averaged more points per game last year than the guy right behind him, Ja’Marr Chase. Chase still has excellent value, coming in as the second wide receiver on the list. Third on the list, Cooper Kupp is just under 30, dropping his value some. All eyes will be on him to see if he can repeat the excellent season he had last year.

CeeDee Lamb is fourth on the list and will hope to have a bounce-back year from last year.  Stefon Diggs jumps to fifth on a pass-happy offense and strong-armed quarterback Josh Allen. Diggs should make another big impact this year. All five of these receivers are top-notch and would help your team, however, Jefferson, Chase, and Lamb are the younger ones to target for your dynasty teams.

The fact that this was Justin Jefferson's first career touchdown is just so perfect: pic.twitter.com/SNKLlOjgWg

Tight end remains a tricky position if you don’t have one of the top guys and the fantasy football dynasty trade value chart reflects that. The gap between the top tight ends’ trade value rank and the sixth tight end is pretty big. Kyle Pitts, who had a phenomenal rookie season where tight ends normally don’t make immediate impacts, remains at the top of the trade value chart. The next closest is Mark Andrews, who may be older at 26, but still finished with the most points per game.

The next three are the exact players you’d expect to see when discussing top tight ends. Travis Kelce will adjust to life without Tyreek Hill opening the field up. In fourth, Darren Waller will share more targets with big-play threat Davante Adams. Lastly, George Kittle will adjust to catching passes from Trey Lance, rather than Jimmy Garoppolo. Kittle is a fun, high-energy player who is on the field often due to excellent run-blocking abilities.