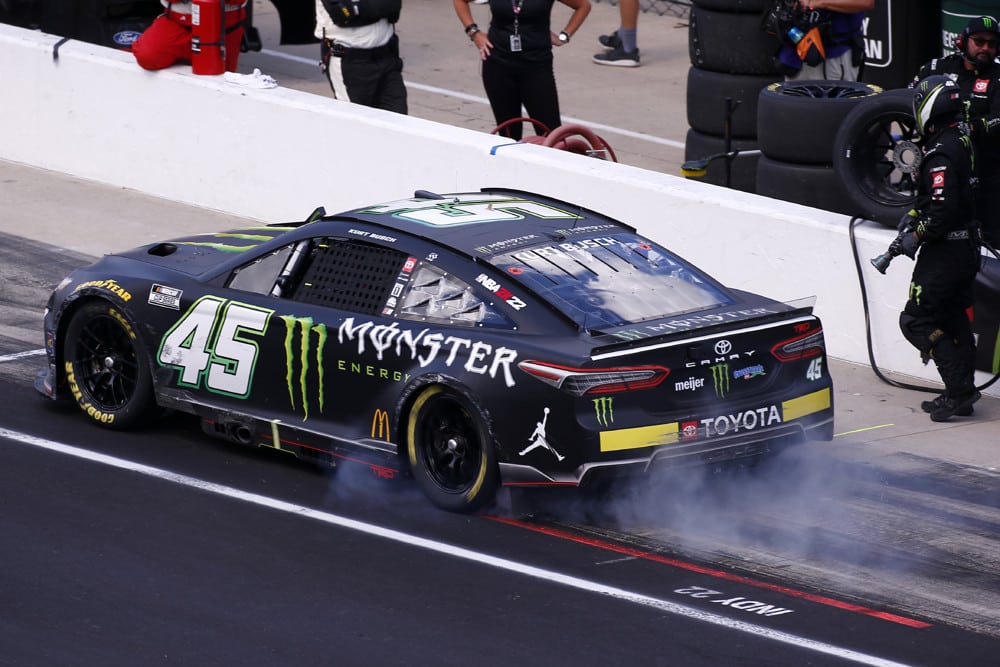 Fifteen! Fifteen different race winners so far this season in NASCAR. There are still three regular season races left before the playoffs begin. The final race before the playoffs will be at Daytona International Speedway, a track nobody wants to go to having to score a win to make the playoffs. Even though there have been fifteen different winners, some big names and perennial winners in the sport have yet to take home a trophy this year. The 2017 series champion Martin Truex Jr, the co-favorite to win this weekend (+600) tops that list. Ryan Blaney, Brad Keselowski, and Aric Almirola are among others still searching for that win. Lot of laps are in store for this week’s Federated Auto Parts 400 NASCAR DFS plays.

This week, NASCAR goes to the Richmond Raceway. Before this weekend, Atlanta was the only track the series had been to earlier in the year and returned for a second trip. On April 3rd the Cup Series visited this track, with Denny Hamlin picking up his first win of the season. We talked on the NASCAR GAMBLING PODCAST about this and how much weight you can put into what happened earlier in the season compared to what to expect this week. While you can use that to a degree (expect Toyotas and Gibbs cars to be good), the teams have learned a lot since then. Make sure to use a good balance of recent performance as well. A note: Kurt Busch will once again miss the race with concussion-like symptoms from his wreck in qualifying at Pocono. Ty Gibbs will continue to fill in for Kurt this weekend.

Denny is too good to pass up on this weekend. Despite his horrendous start to the season, he ran well here and won back in April. Lately, his finishes have been much more consistent. Six of the last eight races at Richmond have been won by a Toyota. Joe Gibbs Racing has this track figured out, and from what we saw in the spring this new car hasn’t changed that. Denny easily had the fastest car last week at Michigan. A pit strategy call to stay out and win stage two for the playoff point followed by a pit road mistake ultimately cost him the chance at the win. However, the team and car have been clicking. Three straight top-2 finishes and a top-5 in six of the last seven races here make Denny the top play this week.

Ryan Blaney is currently second in the regular season points standings. Without a win so far this season, he is also the last driver in the playoffs right now. If a sixteenth driver (within the top-30 in points) wins a race, Blaney gets bounced from the playoffs. This Penske team is well aware of this and with a wild card like Daytona coming up, would love to punch their ticket this week. In the spring Blaney won the pole and started P1. Blaney went on to lead 128 laps and finish 7th in that race. At just $9,900 salary cost he offers a very high ceiling and great value at the same time.

It’s no secret this kid has talent. The grandson of three-time Super Bowl winning Head Coach Joe Gibbs, NFL Hall of Famer, NASCAR Hall of Famer, and five-time NASCAR Champion as an owner. Ty has proven to everyone he’s got the talent to go with the name. With five wins in his first full-time season in the Xfinity series already, and four wins running part-time last year. Then to be thrust into this No.45 car co-owned by Michael Jordan after Kurt Busch’s injury. Gibbs again has not disappointed. In three starts he’s not finished worse than 18th, including a 10th last week. There is some risk here, a shorter track with closer racing. Gibbs though might be the calmest driver out there and offers huge upside at a DFS price of just $7,600.

@NoahGragson says he wants to finish all the laps today! But at +40,000 on @WynnBET you gotta throw a little coin on that! Thanks for your time Noah! @Husker_Zeeb @TheSGPNetwork @GamblingPodcast pic.twitter.com/iRD3PyLUar

Noah Gragson offers value here if you need to dig deep for a driver this week. On Wednesday it was announced he will be the full-time driver of the 42 entry next year for Petty-GMS racing. A well-deserved honor for the young Las Vegas native. The Xfinity series is off this week and like his counterpart above in Ty Gibbs. These guys can focus solely on the Cup Side of things. Gragson doesn’t expect to go out there and win. He’s said earlier this season he just wants to complete all the laps and keep things clean. That’s exactly what you need from a driver in this range for this week’s Federated Auto Parts 400 NASCAR DFS contests.