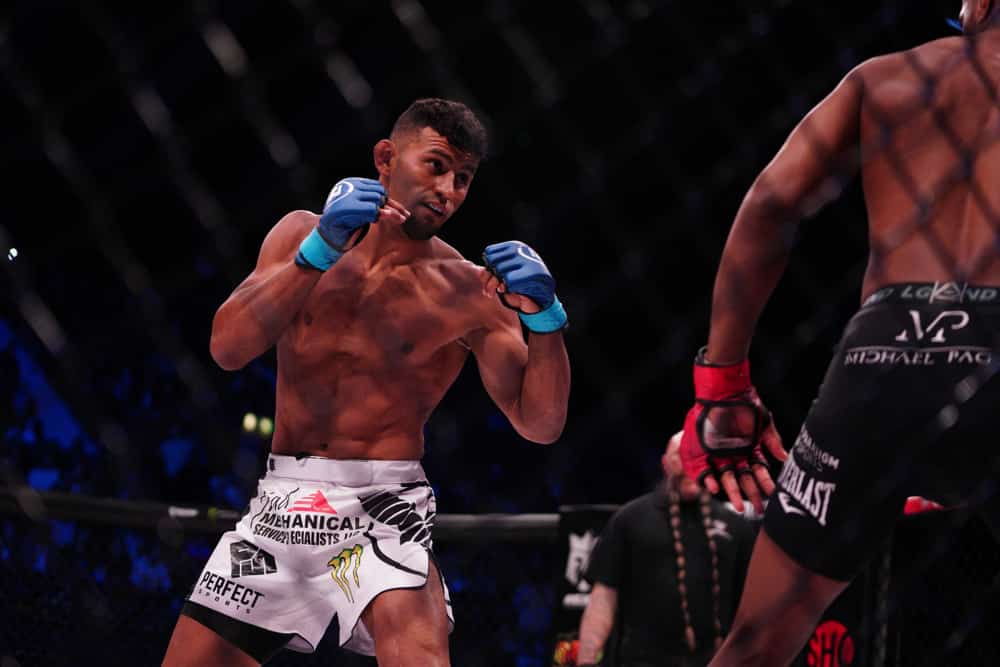 Bellator has finally made its way to the great state of Washington for what should be an exciting card. A former welterweight champion is at the top of the slate while the main card begins with a heavyweight bang! In this article, I will preview and make my selections for Friday night’s main card – here are my Bellator 283 predictions!

Davion Franklin is a massive man! Marcelo Golm is coming off a nice KO win in his last fight, but Franklin is 5-0 in Bellator, and three of those five wins have come by KO/TKO. I think he gets a vicious knockout here. I’ll take Davion Franklin via KO/TKO at -110.

I was really upset when Lorenz Larkin left the UFC, but he’s found a home here at Bellator. He’s taking on an undefeated Mukhamed Berkhamov but I think with Larkin’s striking and knockout power, he can keep this fight close. Give me Lorenz Larkin at +130 on the ML and I’ll even sprinkle a little on Larkin to win via KO/TKO at +460.

There’s no way Usman Nurmagomedov is losing this fight. Chris Gonzalez had a nice win in his last fight, but you can’t fade a guy with the last name Nurmagomedov, related or not. But since he’s such a big favorite (-800), I would include him in your ML parlay.

I have to go with Tofiq Musaev in this one. He’s making his promotional debut and I think he’ll be able to push the pace, be light on his feet and keep his distance. Musaev is the favorite for a reason, and I think with his striking ability he’ll be able to earn his first win in Bellator. Give me Musaev on the ML at -139.

Tough fight to pick because Douglas Lima is the more seasoned fighter, but the more I look at this fight, the more I think Jackson has a shot. It’s hard for me to fade Douglas Lima, he’s a finisher but after missing weight, I think the weight cut got to him. Jackson is coming in with a lot of momentum winning his last five fights. Give me the chalk here, Jason Jackson ML -190.

For all other MMA-related things like the crew’s picks, articles, and podcasts please check out the Sports Gambling Podcast Network website and click the MMA tab. Good luck this weekend and let us know if you’ll be riding or fading the crew’s plays for Bellator 283 on Twitter @SGPNMMA and/or on the SGPN Discord‘s fight channel.