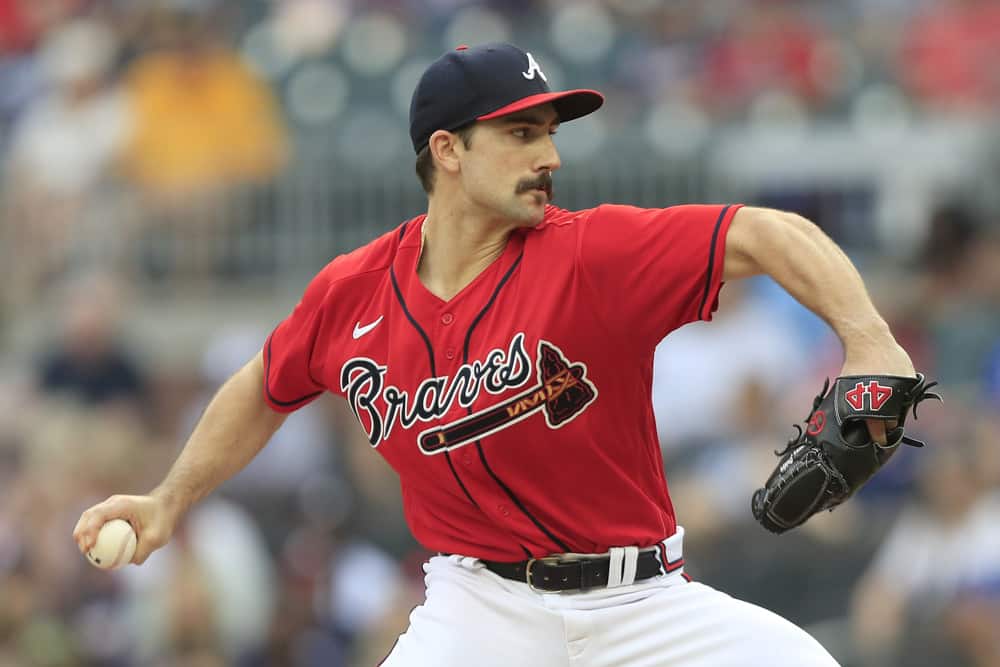 It has been an ELECTRIC season for starting pitchers in the MLB, with a plethora of players in the fantasy baseball world who deserve recognition as first half breakouts! This list doesn’t include guys in the Top 200 of ADP (which were taken from FantasyPros by the way). Big names like McClanahan, Manoah, Gilbert, Verlander, etc., of course get love for how well they’ve outproduced their ADPs, but I want to focus on those who were either drafted late or undrafted entirely. Let’s get to it!

First on the list of first half breakouts is Triston McKenzie. McKenzie made a big jump in the ERA & WHIP departments compared to the 4.95 and 1.183 he posted in 2021 respectively. At the 2022 break, McKenzie earned rights to be 1/12 eligible SPs with under a 1.00 WHIP. His BABIP is second best in the game among eligible. 10/16 starts quality is excellent. Look at the guys with a higher percentage of their starts quality and it is mostly aces. I am a little concerned for his 2nd half outlook as the strikeout stuff is down, while not generating a lot of ground balls, and letting up a lot of hard contact. He only threw 120.0 IP in his first full season last year which may cause fatigue ahead. But, with respect to first half breakouts, Triston deserves nothing but praise. Way to go Big Poppa!

Triston McKenzie warmed up to Big Poppa before his last inning. As he walked around the mound after his final warmup pitch, he threw in a little Miles from the movie Hardball.

Also, I was today years old when I realized Michael B. Jordan was in that (excellent) movie. pic.twitter.com/4soeQ5AWT0

A first half of greatness! Worthy of the nickname Tony G! Outstanding stuff across the board making him a easy pick among the first half breakouts. Gonsolin leads the league BABIP and AVG, he’s second in WHIP, and fourth in ERA. Trails only Verlander by one win and is the lone pitcher with over five wins and no losses. Innings may also prove to be a challenge for him. Gonsolin tossed 128 IP in his 2018 minor league season, but his most in the majors was 55.2 last year. He’s done a great job of throwing strikes and limiting hard contact, and hopefully he can keep it going as a top five NL Cy Young favorite. Sandy will be tough to catch by anyone in the NL though.

Javier is nothing short of a first half breakouts pick based on the ADP. I’m looking at his numbers across the minors and majors wondering why he wasn’t a full-time starter sooner. Granted he’s only 25 years old and began his minor league career at age 18. But he went on to throw 377.0 innings down there, with a 26-11 record, 2.22 ERA, 1.029 WHIP, and 12.2 K/9. Always interesting to me when a player’s xERA is lower than his actual, but I guess that’s reasonable for a guy who is 22nd in WHIP, fourth in K%, and second in HC%. Another one to keep an eye on with respect to fatigue, but this man is worth shouting after that first half. All Star snub?

Nasty Nestor!!! He was overlooked by many after posting excellent numbers in 2021 to the likes of a 2.90 ERA, 1.075 WHIP, and 10.0 K/9 across 93.0 innings. Cortés built on those numbers and came back even better as one of the true first half breakouts. He’s locked in and helps compose one of the best rotations in baseball. Only nine eligible players have achieved both a 3.00 or better ERA with a 1.00 or better WHIP in the first half. He’s 13th in K/BB and 10th in BABIP. There’s also concern for fatigue with Nasty. He’s surpassed last season’s innings and has three more starts than last year too. Time will tell with these men, but I wouldn’t hesitate to sell high in redraft on any of them.

NESTOR STRIKEOUT IN THE ALL-STAR GAME I CAN'T BELIEVE THIS pic.twitter.com/GNj5WTDt5B

Walker’s made vast improvements compared to 2021 and went largely undrafted resulting in his spot on the first half breakouts list. Definitely not a big K guy, but he’s well above average in terms of AVG, BABIP, OPS, wOBA, BACON and each of their respective expected stats. In the first half, Walker put up top 10 stuff in ERA and top 20 in WHIP. Unlike the other breakouts mentioned, he has pitched deep into a season with 159.0 innings in the latest campaign. His 2.80 xERA is a promising indication that he will keep this going in the 2nd half.

The 33 year old phenom is having the best season of his Major League career. Absolutely deserving of a spot with the first half breakouts after his performance earned him All Star status. This was his second time achieving the feat too. The first came in 2018 after a three-year stint in Japan’s Nippon Professional Baseball league. Miles is the third member of the breakouts list among the aforementioned nine league-eligible with a 3.00 or better ERA and 1.00 or better WHIP so far. He’s sitting third in the league for BABIP, and third in the league for innings pitched with a top ten average of 6.1 IP per game. And just look at that movement . . .

The #5 pick of the 2017 MLB Draft is officially Mr. Wright Now! Folks who got on board early were rewarded in the first half with a dominant performance. He struggled mightily in limited action across his first 70.0 innings in the bigs between 2018-2021. But he’s not easily considered one of the first half breakouts. Wright’s tied for second-most wins in the game with yours truly Tony G. He has a nice array of pitches with everything you want to see from velo to movement and spin. It led to him being top 20 in both CSW% and GB% which don’t often pair together. And it helps explain why his peripherals indicate this was not luck but rather a true breakout. We’ll see if he can keep it together in the second half. He did toss 137.0 innings in AAA just last year.

Another ex-Pirate turned All Star! Granted he only spent 103.1/721.0 career IP with them. But still . . . it’s just comical. The Dodgers helped evolve this man into an ace in the first half. Compare the numbers above to his career 4.39 ERA and 1.275 WHIP. That K/BB is 11th in the league while his 4.4 BB% is 13th. His efficient 14.73 P/IP is also 7th in the league. Anderson’s doing a great job limiting hard contact ranked 21st in league, and although he isn’t a big K guy, he’s throwing plenty of strikes sitting top 50 in both CSW% and SwStr%. Coming off a 167.0 inning season, fatigue shouldn’t be an issue ROS. Have to be happy about an xERA this close to the ERA too. It’s a decent opportunity to buy low from an owner who’s worried it won’t last.

It wouldn’t be a first half breakouts list without Spencer Strider. The third of the glorious three-headed-mustache-monster with Nasty and Miles. Despite not qualifying, Strider is the league’s King in both K/9 and K%. Aside from Alex Cobb (who I still recommend buying low on) I can’t name another player with an xERA, FIP, and xFIP all lower than the ERA. Strider throws high 90s, he’s second in the league for SwStr%, fourth in HC%, and 11th in CSW%. He’s holding batters to a .180 AVG, tied for third in the league with Burnes. I’m just going to say it, future Cy Young winner. This man is talented, fun to watch, and if you got him in your league(s), cheers! I scored in 6/7 of my leagues.