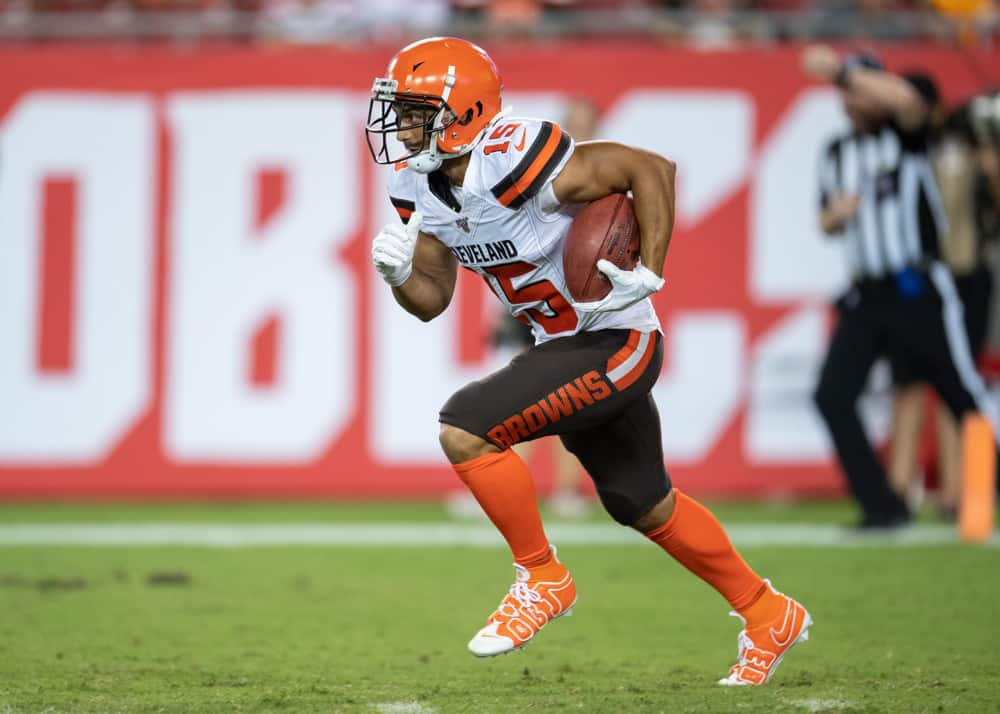 The kick-off of the MLFB ($MLFB) season is getting closer, and the rosters of the 2022 MLFB teams are taking shape. We’re going position by position for the entire league and picking out the top 15 players at each. Today we’re looking at the top 15 wide receivers in MLFB.

As spread offenses have become more common at every level of football, the number of talented wide receivers has grown. Modern offenses are designed to get these WR’s the ball in space and allow them to make a play.

MLFB stocked its WR pool with a vast experience gap. Some players have spent multiple seasons with NFL scout teams, but a good number of players are using the MLFB as their first attempt at professional football.

Admittedly, this is a pretty sizeable nine-year gap since recording stats could be located. Though the stats couldn’t be found, there are video clips from the spring league of Brundidge taking the top off of defenses for TSL teammate and quarterback Zach Mettenberger. Given that he’s one of the older players in the league, the recent tape from TSL highlighting his speed is what likely landed him his spot on the Armada.

The first thing that jumps out about Jamari Hester is the sheer size. Hester’s 6-6 frame will be a big target in the red zone for the Arkansas Attack. He had a very productive career at Jacksonville State, where he made an impact immediately as a freshman, starting five games. By the end of his Jacksonville State career, Hester had amassed 161 receptions for 2,399 yards and 22 touchdowns. While he didn’t make the active roster after being signed by Toronto, he still has experience with the business side of professional football.

Those 2018 totals Ka’Ronce Higgins produced in 2018 for the Muleriders might seem light compared to some of the monster numbers that fellow teammate and fellow top 15 WR Jamari Hester produced in college, but when you consider that those numbers were in six games, it’s pretty impressive. In essentially two and a half seasons, Higgins had 109 receptions for 1,863 yards and 16 TD. In addition, he seems to be capable of stretching the field based on his time as a Mulerider. He averaged 22.7 yards per catch as a freshman and 17.1 yards per catch in his college career.

Nick Holley might be using the MLFB as an opportunity to reinvent himself as a WR. Holley played RB throughout his career at Kent State. His breakout season as a WR was in the short-lived XFL 2020 season with the Houston Roughnecks. As a Roughneck in the abbreviated 2020 season, he caught 21 passes in five games; that’s nearly half of his total receptions over a four-year career at Kent State. He only appeared in three games for the Stampede of the CFL but still caught ten balls in that span. The MLFB will give Nick Holley plenty of opportunities to put his skills as a WR on tape for NFL scouts.

In his career at Mercer, this big-bodied receiver set the program record for receiving yards in a season and then broke his record once before leaving campus with 814 yards. Irvin spent last season on the roster of the Tuscon Sugar Skulls of the IFL, but a receiver of this size will shine on the full-sized field of the MLFB instead of the confines of indoor football.

In his time with Toledo taking part in MACtion, Johnson was a very productive receiver for the rockets. Johnson caught 123 passes at Toledo for 2,224 yards and 24 receiving touchdowns. This college productivity led to Johnson getting an opportunity to make two NFL rosters and stints on practice squads with the Cowboys and Bears. The USFL showed us that players with NFL experience, even as practice squad players, typically stand out amongst their competition in spring and developmental leagues.

While pro experience is typically advantageous in these spring and developmental leagues, versatility is also a valuable trait. Justin Manyweather provides versatility with his ability to return kicks. The 5-9, 175 lbs speedster was productive in his final season of college, scoring 11 touchdowns; however, if he can continue to develop his skills as a kick returner, special teams could be his ticket to making an NFL roster.

Kameron Pleasant looks like a diamond in the rough for the Ohio Force. Following his last season at Cabrillo Junior College, Pleasant was voted 1st team Junior College All-American. Instead of transferring to a four-year institution, Pleasant opted to try his luck with the IFL and now the MLFB. He has good size and could prove he was more than a big fish in a small pond at the JUCO ranks.

Ross has SEC playing experience and NFL size. The 6-6 225lb Ross has spent time in three pro leagues, including a stint with the Bengals practice squad. His size and experience will be valuable for his Ohio Force QB.

Compared to the other players in this league, Alonso Russell has a lot of professional experience at multiple levels. After spending time on the Bengals and Giants practice squads, Russel landed in the pandemic, shortened XFL restart, and showed a good connection with Battlehawks QB Jordan Ta’amu. Additionally, his height and length at 6-4 will be an asset as he’s got a few inches on a relatively tall pool of defensive backs in the MLFB.

Damon Sheehy-Guiseppi, at first glance, might not appear to fit on this list given his lack of stats as a true WR in his time at Phoenix Junior College. However, Sheehy-Guiseppi has the two attributes that make players extremely valuable in developmental leagues. Sheehy-Guiseppi not only has ample pro experience with his stints in the NFL, XFL, FCF, and TSL, but he also offers versatility due to his prowess in the kick return game; in his time at Phoenix JC, he averaged 32 yards per kickoff return with four touchdowns and averaged 15 yards per punt return with two additional TD’s. His skills as a kick returner are what might land him back on another NFL roster. In his stint with the Browns, he had one punt return for a touchdown in preseason action.

Dez Stewart enjoyed a productive three-year career at Ohio Dominican from 2013-2015. In his three-year career at the division two school, Stewart averaged 967 yards per season with a career-high 1,156 yards in 2014. In those three seasons, he scored 23 touchdowns as a receiver and added one additional touchdown as a punt returner in his final season at Ohio Dominican in 2015. Though he doesn’t have as many stops in the pros as Sheehy-Guiseppi of the Arkansas Attack, he also has the same coveted combination of time on a professional roster and a versatile skill set.

Wilson had such a strong career at East Stroudsburg college that the NFL found him at the division two school, and he was able to find a spot on the Eagle’s practice squad despite not having traditional NFL size. When Wilson joined East Stroudsburg in 2013 and saw limited action, but returned to the team for the 2016 and 2017 seasons, catching 111 balls in two years and accumulating 1,731 yards with 12 scores.

Wilson has kick and punt return experience, and that skill led to him being the only player signed from an Eagles minicamp in 2018. Given his current choice in vocation, many might assume that Wilson lost two years to injury. However, in reality, Wilson changed majors and gave up two years of football to focus on academics, and at the time of his signing with the Eagles, he was nearing his masters in economics.

Tevon Wright played all four years of his college career at division two Chadron State and improved his production every year he was on the roster. In his first year, he saw some playing time with 15 receptions for 183 yards and 1 TD but left the school as WR1 after a 2019 season that featured 74 receptions for 1,446 yards and 16 TDs. After his time at Chadron State, Wright got the opportunity to put more of his play on tape with the Alphas of TSL, where he caught 34 passes for 424 yards and two TDs against other professionals.