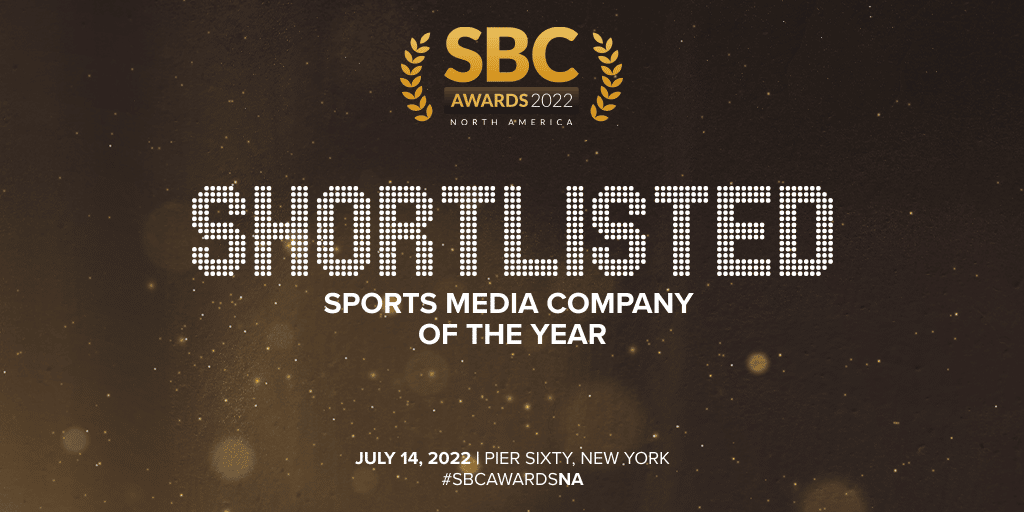 SGPN’s competition in the category includes some of the most prominent and well-heeled companies in the sports media space, including American Affiliate, Better Collective, Catena North America, MediaTroopers, NBC Sports Next. Playmaker Capital, The Game Day and XLMedia. Almost all are backed by capital resources in the billions or tens of millions of dollars. By contrast, SGPN co-founders Sean Green and Ryan Kramer launched 10 years ago in Green’s one-car garage, taking advantage of new technology to push out their content inexpensively and begin building a following.

In 2017, Green won $200,000 in a DraftKings Fantasy Competition and SGPN used the money to turn the corner as a profitable, sustainable business.  With the repeal of the Professional Sports and Amateur Sports Protection Act (PASPA) that following year, SGPN was well positioned to seize the moment and grow the enterprise that now includes 60 contributors and 23 different podcasts providing analysis and selections on 18 wagerable sports plus special events.  SGPN is headquartered at a state-of-the-art studio in Los Angeles.

Other companies that are shortlisted in various categories at the SBC Awards North America 2022 include: Circa Resort & Casino, DraftKings, FanDuel, Penn Interactive, PointsBet, BetMGM, Resorts Digital Gaming and Rush Street Interactive.  Awards will be presented in 27 categories as the highlight of the summit finale in front of 600-plus industry executives following two days of events, symposiums and networking sessions at Meadowlands Exposition Centre in Northern New Jersey.

“This is as big as it gets in our industry,” said Green, a Philadelphia-area native. “We are going up against some of the biggest brands in the space. We started with personal seed money and have continued to grow through traditional channels. Our candidacy for Sports Media Company of the Year is a testament to all the hard work everyone at SGPN has put in over the last 10 years to deliver a high-quality experience for our followers.”

“This is a great way to celebrate our 10th anniversary,” added Kramer, who hails from the North Jersey community of Scotch Plains. “We believed we could package sports wagering information in an insightful and entertaining way and it has caught on. It’s awesome to see our efforts being recognized.”

“With such strong competition among the Awards entrants, just making it on to the shortlists is a real mark of quality, so it will be fascinating to learn who our expert judges select as the big winners on the night,” said Rasmus Sojmark, Founder and CEO of SBC.

The SBC Awards North America Awards is the culmination of a week of events at the SBC Summit North America, the biggest conference and trade show for the sports betting and iGaming industries in the US and Canada. The awards recognize the achievements of operators, affiliates and suppliers from all the major disciplines including payments, marketing, platform providers and data.

Sports Gambling Podcast Network™ was established in 2011 as one of the first website/digital media platforms to provide consumers with an entertainment experience featuring sophisticated insight and analysis plus definitive wagering recommendations and selections across the full spectrum of legally-available sports. Co-founded by sports and entertainment personalities Sean Green and Ryan Kramer, it is home to the Top 40 All-Time football podcast (per Chartable.com) Sports Gambling Podcast, one of over 20 separate podcasts.  The website, www.sportsgamblingpodcast.com, boasts over 45 contributors delivering editorial content and social media postings under the SGPN banner.  The platform generates millions of unique page views and podcast downloads annually and remains a primary destination for the burgeoning population of sports fans across America and around the world. In addition to his stand-up comedy act, Green is an accomplished TV comedy and script writer with credits including MTV’s Ridiculousness and Nickelodeon’s Crashletes with Rob Gronkowski.  He has also anchored several sports wagering and fantasy sports shows for SiriusXM and ESPN+.  Kramer is a SiriusXM contributor and a sports wagering marketplace influencer who specializes in NFL game prop bet predictions.  He has multiple top finishes in the Fantasy Football Players Championship (FFPC) Main Event. SGPN is a member of the Fantasy Sports Gaming Association (FSGA).