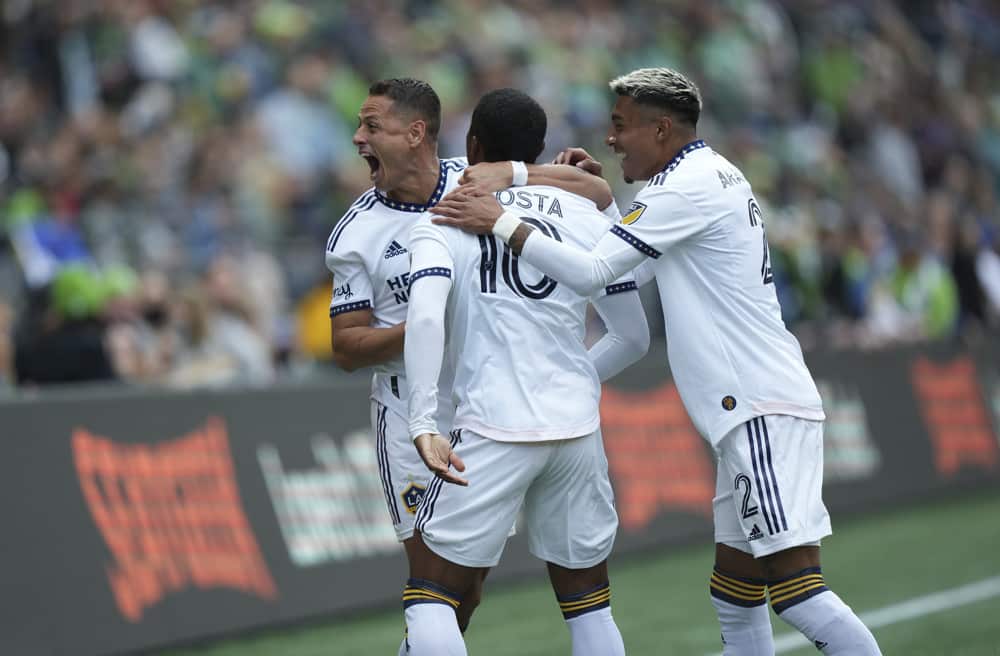 SEATTLE, WA – MARCH 12: Los Angeles Galaxy forward Douglas Costa (10) celebrates his first half goal with Galaxy forward Chicharito (14) during an MLS game between the LA Galaxy and the Seattle Sounders on March 12, 2022 at Lumen Field in Seattle, WA. (Photo by Jeff Halstead/Icon Sportswire)

We are back with another FULL weekend of MLS matches! I absolutely love what MLS teams are doing right now in regard to bringing in some very well known players from Europe and starting to grow this amazing game in the states. I’m sure we have not seen the last or the biggest player in Europe to join the MLS this season. Now let’s get into my favorite plays for this weekends jam packed slate!

Going right back to the well with this matchup. Two of the biggest clubs in MLS and one of the best rivals in the league. Los Angeles FC will certainly be looking for revenge after falling to Galaxy 2-1 back in April. Then again in May for a US Open Cup match where they lost 3-1 to their rivals.

Back in April, although they lost, Los Angeles FC was the better team in that matchup. They won in xG (expected goals), time of possession and shots. They created four big chances, missed three of those chances and hit the woodwork all while producing seven shots on target.

LA Galaxy created chances of their own in that match as well. They too had four big chances but only failed to capitalize on two which ended up being the difference in the game. I expect the same type of match again in this one. Los Angeles FC are a much better team at home as they rank 1st in MLS in front of their home crowd and have only lost once.

This match might not look appealing to some at first glance. But I think it could be one of the more exciting ones this weekend with what I project to be a high scoring match.

Both teams are coming into this match in decent form. Vancouver have not lost in their last four and are unbeaten in eight home games. They are averaging 1.5 goals per match at home while conceding just under a goal a game. Their offense is not elite but I think in this matchup against a Minnesota defense that is struggling, they should find success.

Minnesota have not kept a clean sheet in 12 matches. Despite having one of the top keepers in MLS, their defense has just not been good all year. They’ve only kept three clean sheets all season and are conceding an average of almost two goals per game on the road. They have, however, managed to score a goal in four straight games.

H2H Stat: All five matches in Vancouver have seen 3+ goals.

This is another one of those matches that might not look good at first glance, but one that I think should have some fireworks! Both teams have scored at least one goal in their last 4/5 matches. Dallas have one of the top scorers in MLS on their squad in Jesus Ferreira and he is an absolute problem on the pitch.

He currently has ten goals and four assist in 18 matches. But he also leads the team in chances created and is a player you really notice when watching FC Dallas matches. His team has scored an average of 1.25 goals per match on the road while conceding the same number of goals. They have failed to keep a clean sheet in their last nine matches and have not kept Houston off the board in their last four meetings.

Houston have been average to below average this year. They have had moments of brilliance by beating Galaxy and Nashville this season. But they also lost to the likes of DC United, Charlotte and Sporting KC. However, they can score. They average almost 1.5 goals per game and do not need a lot of chances to find the back of the net. They rank 21st in big chances created but 17th in goals per match.

H2H Stat: Four of the last five have seen 3+ goals.