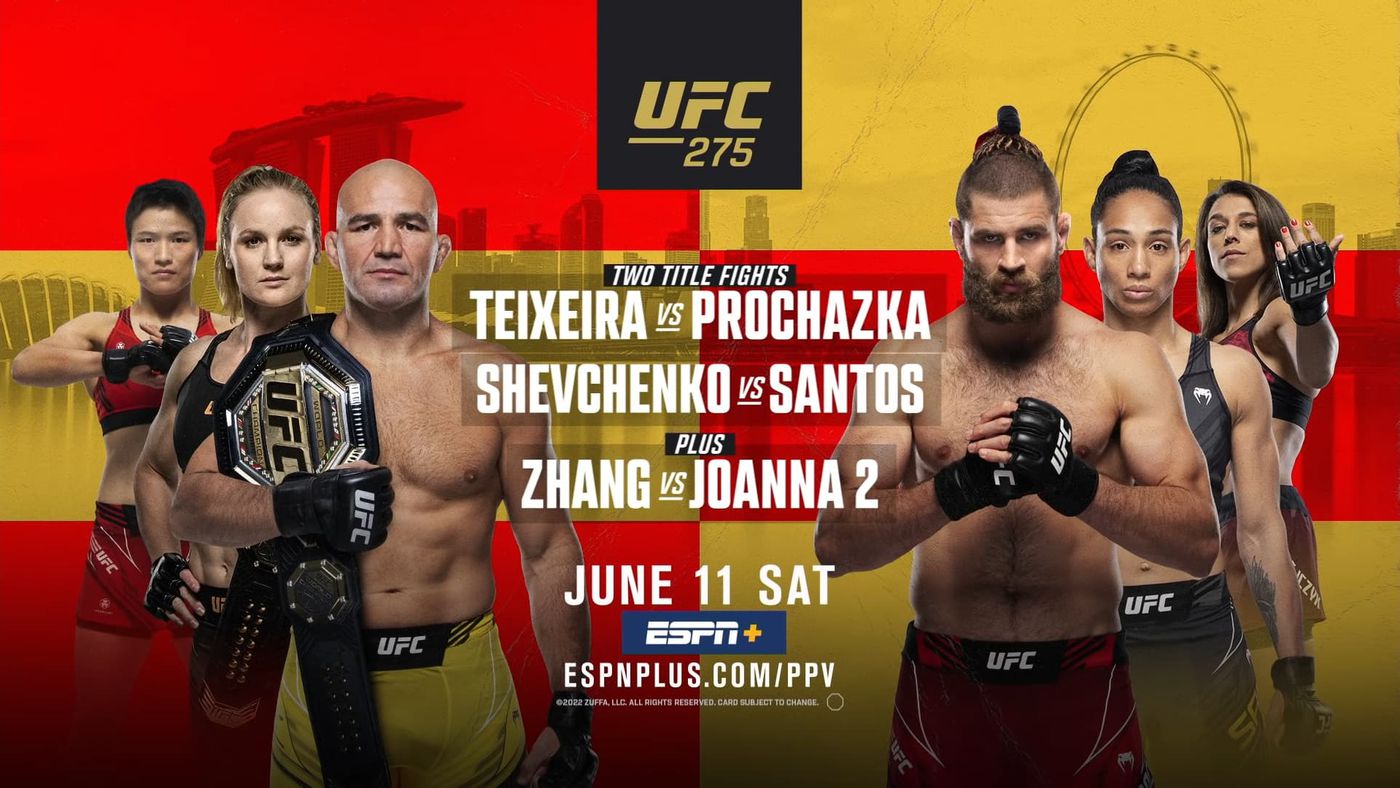 This column killed it last week at UFC Vegas 56, going 11-3 and winning big bucks. This week’s UFC offering is their PPV for June, UFC 275, emanating from the Singapore Indoor Stadium in Kallang, Singapore. The 12-fight lineup features two title fights at the top, plus a long-awaited rematch of one of the greatest UFC fights in history. Here are my UFC 275 predictions to help you make it a profitable Saturday night. 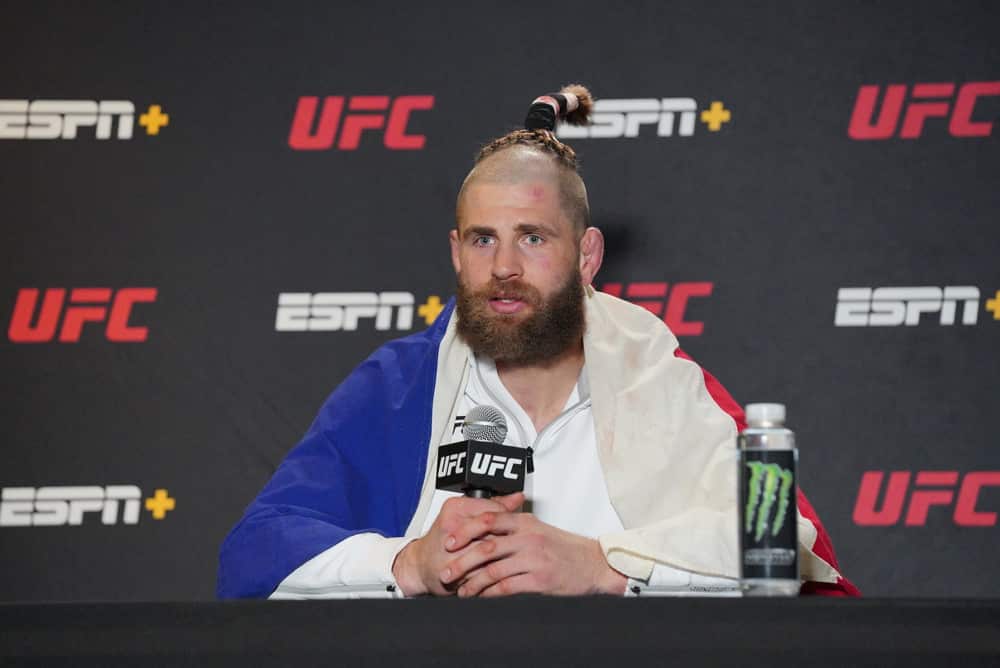 Saturday’s main event, for the UFC Light Heavyweight Championship, is one of those rare occurrences where the champion enters the fight as an underdog. In this case, not just an underdog, but a pretty sizable one (+165). But I’m agreeing with the lines and am picking Jiri Prochazka to usurp the newly crowned king, Glover Teixeira, this weekend. It’s going to come down to the striking, which Jiri excels at and has a four-inch reach edge to his advantage. Obviously, the 42-year-old champ is amazing on the mat, but I don’t think he’ll get a chance to work his magic before Prochazka lights him up.

If you want to hear the answer to this question, there's only two place to do it. 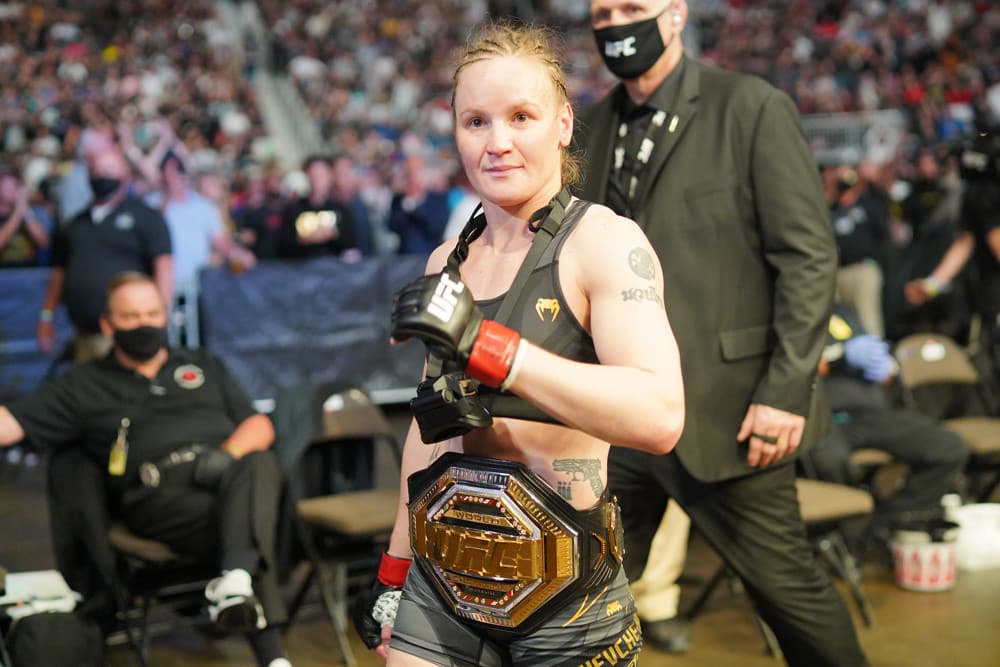 Women’s Flyweight Champion Valentina ‘Bullet’ Shevchenko makes her seventh title defense on Saturday, and by the look at the odds it’s expected to be a successful endeavor for her. Challenger Taila Santos is a very formidable opponent, a finisher (10 knockouts, three submissions in 19 wins), and a winner of four straight. But none of that will probably matter – Shevchenko has no holes in her game.

On to the aforementioned rematch, with Zhang Weili winning the brutal first encounter back in March of 2020, totally disfiguring (temporarily) Joanna Jedrzejczyk.

This was the last fight that then-strawweight champ Zhang won, losing her title in the next fight to Rose Namajunas, then losing again in the immediate rematch. However, JJ hasn’t even stepped into the cage since the Zhang fight. I’ll take Zhang to win the rematch due to this inactivity, along with the fact that she won the first fight.

Flyweight prospect Manel Kape entered the UFC with a lot of hype behind him, only to drop his first two fights. ‘Starboy’ has since righted the ship and showed his immense promise, winning his last two via (T)KO. He gets a favorable matchup in Singapore against mediocre Rogerio Bontorin – Kape should piece him up on the feet.

One of the best-looking prospects from last year’s edition of Dana White’s Contender Series was Jack Della Maddalena, and apparently the UFC agrees as they have given him a big step up in competition for his second UFC fight. Emeev is a very strong grappler, but Della Maddalena’s grappling is good enough to hold up, and his striking is much better. 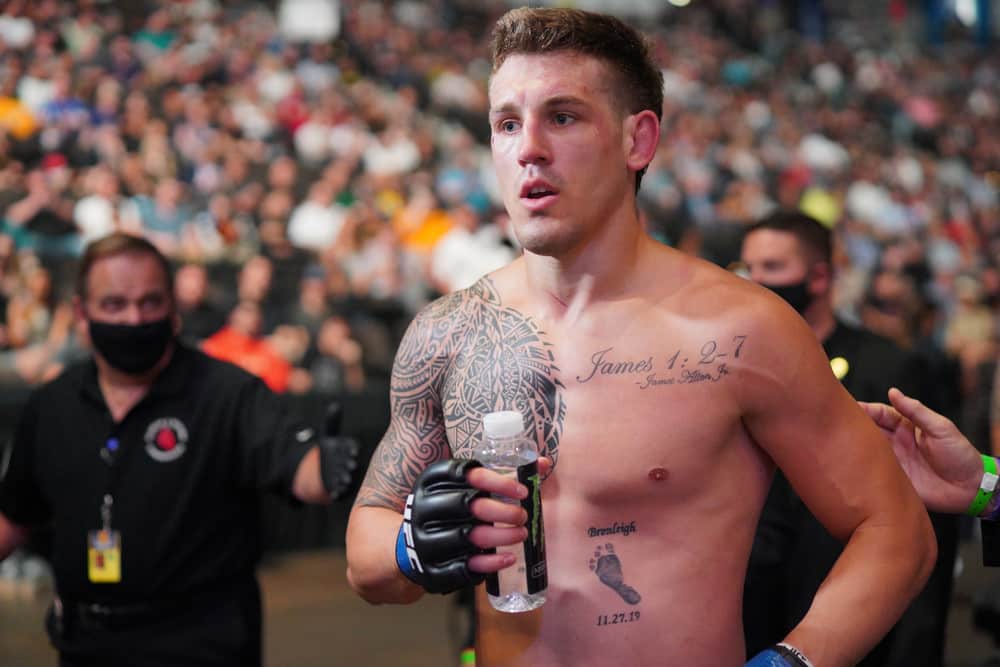 I wouldn’t say I’m all-in on ‘All-In’ Brendan Allen, but I like him in this middleweight fight against Jacob Malkoun. He’s the bigger man, the more experienced man, the better grappler (well, at least statistically), and the more active striker.

Hey, they don’t call me Jeff ‘Chalk-x’ Fox for nothing, as I’m riding chalk again in this fight. I like Seung Woo Choi’s strength of schedule compared to Josh Culibao’s, plus he’s the more active striker of the two featherweights.

I’m going with experience and finishing ability over youth and athleticism in this lightweight fight. ‘Mean Machine’ Steve Garcia has nine more pro fights than Hayisaer Maheshate, has finished via knockout nine of his 12 wins, and has four inches of reach to work with over Maheshate.

Andre Fialho hasn’t wasted any time since joining the UFC, as this will be his fourth fight in 2022 already (January, April, May, and now June). He’s won his last two fights via (T)KO, and while Jake Matthews has never been stopped with strikes in a fight, I wouldn’t be shocked if it happens on Saturday.

Ok, fine – I’ll give you a couple of underdog picks for the night. First, South Korean Kyung Ho-Kang in his bantamweight fight against Danaa Batgerel. The former Road FC champ is a submission wiz (11 in 17 pro wins), who also has the size and striking advantage (at least on paper) over his Mongolian opponent.

How about back-to-back underdogs for you?! I really like ‘Dragon Girl’ Liang Na against Silvana Gomez Juarez. She looked very good in her UFC debut, despite losing, and is great at submissions. And Gomez Juarez just so happens to have lost via submission in both of her UFC fights.

A very rare women’s featherweight fight kicks things off on Saturday. Romana Pascual looked real bad in her UFC debut, so no way I’m backing her. And Joselyne Edwards is seven years younger and has four inches of reach on her.

And make sure to check out Jeff’s new Money MMA newsletter/site for more UFC 275 content, including a free Pick ‘Em Contest where you can win fabulous prizes!