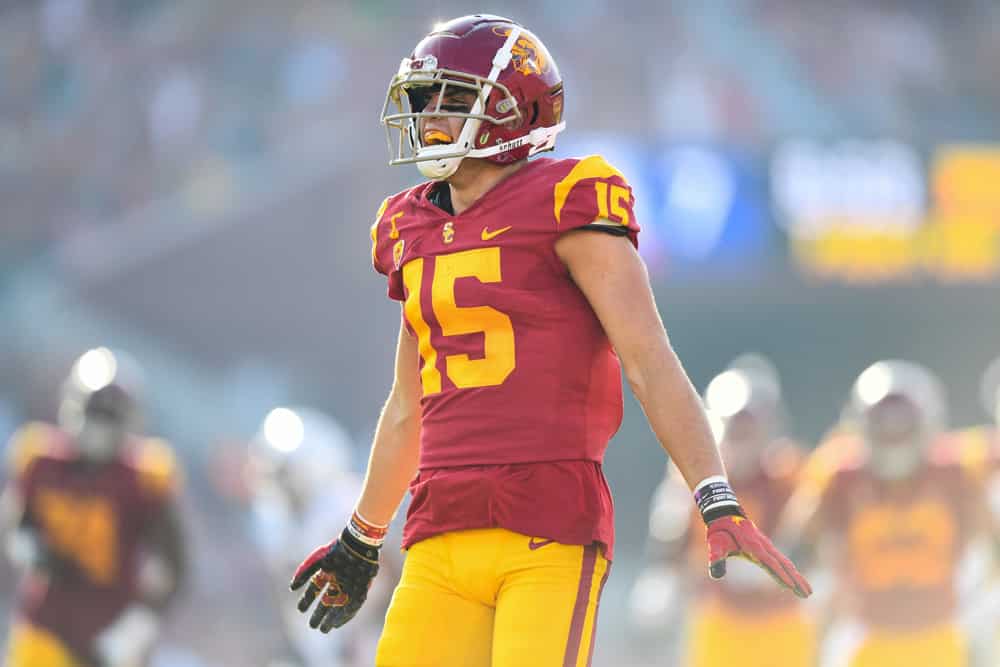 It’s that time of year again. Teams are reporting for OTAs and we are getting our first look at this year’s rookies. Whether you regularly play in redraft leagues or are a proud member of a long-standing dynasty league, it is about time to start doing your research for the 2022 season. The impact rookies may or may not make in year one is always a hot topic. Drafting a high upside rookie in the later rounds of your re-draft league could be the move that vaults you to a fantasy championship. If you own a dynasty team you believe is ready to compete now, you might want to know which rookies to target in this year’s rookie draft that can make an immediate impact. Let’s take a look at the Biggest 2022 Dynasty Rookie Impact Players this NFL season.

What Types of Players are Likely to Explode Onto the Scene in 2022?

I might sound like a broken record here, but it really comes down to talent and opportunity. A player can have all the talent in the world. But, if they are buried on their team’s depth chart, they are not likely to make an impact in 2022. A player may also get all of the opportunities in the world due to injury or a thin depth chart, but if the talent just is not quite there or the player still needs time to develop, they are not likely to make an impact in the NFL in 2022 or on your dynasty team. When considering the types of players that could have a huge impact on the 2022 season, I also considered which team drafted them. This falls under the opportunity umbrella. Some offenses are more suited to plug and a play a rookie that may see immediate success.

Drake London was the first receiver taken in the NFL draft for a reason. He looks the part of your prototypical number one receiver standing at 6-4 and weighing 219 pounds. Injuries cut London’s final season at USC short but in 8 games he still managed to reel in 88 catches for 1,084 yards and 7 touchdowns. London is a contested catch specialist which should help make him a bit more quarterback-proof than other receivers in this class. If Marcus Mariota or Desmond Ritter fail to consistently provide London with accurate passes, he may still bring down a few jump balls for huge gains. Calvin Ridley is suspended for the year and Russell Gage left for Tampa bay. That leaves somewhere in the neighborhood of 200 vacated targets. Even with Kyle Pitts in the house, London should see more passes come his way than just about any other rookie.

Breece Hall was an absolute machine in three years at Iowa State. In three seasons, Hall racked up over 3,900 yards and 50 rushing touchdowns. He managed to rush for over 1,400 yards and 20+ touchdowns in each of his last two seasons. While the Jets are not going to be confused with an offensive powerhouse, they did quietly rank 13th in rushing yards per attempt last year. In addition, the Jets added Laken Tomlinson to an already strong offensive line in the offseason. Offensive Coordinator Mike Lafluer hails from the Kyle Shanahan coaching tree and runs a similar style of offense that wants to establish the run to set up play-action passes later in the game. The Jets attempted to trade back up into the first round to draft Hall. There are a lot of indicators here that the Jets will be using Hall as a bell-cow in 2022.

Breece Hall: 2,310 rush yards after contact since 2019. Most among all RBs in College Football👑 pic.twitter.com/BBmRNGkBL1

Treylon Burks was drafted in the first round by the Tennessee Titans to step in immediately and replace AJ Brown. As a matter of fact, the pick acquired in the trade for AJ Brown was used to draft Burks at 18th overall. Burks was considered by many to be one of the top receivers in this very deep class. He immediately walks into a situation where he is likely to succeed. The Titans are an AFC contender and Burks steps in as the WR1. The Titans traded for Robert Woods but Woods has always been at his best being a top-tier WR2, and he will likely play that role for Tennessee. The departure of AJ Brown and Julio Jones leaves over 150 vacated targets and Burks is likely to see a good majority of those come his way. He is primed for immediate success.

Moore had an explosive 2021 for Western Michigan where he reeled in 95 receptions for 1,292 yards and 10 touchdowns. Landing with the Chiefs is really what makes Moore so appealing here. The Chiefs have been an offensive Juggernaut for years and in 2021 they were ranked 4th in passing yards, 4th in points, and 3rd in total offense. In somewhat of a shocker, the Chiefs traded away Tyreek Hill this offseason and vacated 159 targets in the process. Travis Kelce is still in town and the Chiefs signed JuJu Smith-Schuster in the offseason but the Chiefs have been desperate for a number 2 receiver to step up for years and compliment Hill and Kelce. Moore has a real chance to be, at worst, the number 2 receiver on a top 5 offense in the league. That puts him in a prime position for a successful 2022.

Chris Carson and Rashad Penny are still in town but that does not mean Walker will not see the field. Carson is still recovering from neck surgery and might not play in 2022. Seattle brought Penny back on a one-year deal and have not made a full commitment to him. The Seahawks have not been an explosive offense as of late but they run the ball well. They ranked 11th in rushing yards in 2021 and Pete Carroll always makes a sometimes maddening commitment to the run game. Since 2018, the Seahawks are third in rushing rate so even if Penny and Walker split time, the volume will be there. After trading Russell Wilson to Denver in the offseason, the Seahawks will be turning to either Drew Lock or Geno Smit under center. The Hawks will likely be running the ball often to mask their weaknesses.

Kenneth Walker III has 132 more yards AFTER contact than any other player@MSU_Footballpic.twitter.com/qN0A8TLvx2

Garrett Wilson did not land with an offensive powerhouse. He also landed with a team that has a somewhat crowded wide receiver room with the likes of Elijah Moore and Corey Davis still in town. There is still a path to a productive rookie season for Wilson who has shown he is capable of producing at a high level when part of a crowded WR room. In 2021, Wilson was competing for targets with fellow first-round pick Chris Olave and Sophomore Jaxon Smith-Njigba. Even though Ohio State was littered with elite offensive talent he was still able to compile over 1,000 yards receiving and 12 touchdowns. The Jets were a finalist for Tyreek Hill in the offseason so you have to imagine Garrett Wilson might be slated for whatever role they had in mind for him which is promising for his potential usage in 2022.

Sure, the Saints don’t have Drew Brees slinging it anymore but they still have Jamies Winston. Before getting injured last season the Saints were 5-2 and Winston had thrown for almost 1,200 yards with 14 touchdowns to only 3 interceptions. Michael Thomas might return to the field this season but could miss the start of the season. Jarvis Landry was signed in the off-season but is no more than a complimentary possession receiver at this point in his career. Enter Chris Olave, who many experts had ranked as the most NFL-ready and polished receiver in the draft. If Michael Thomas misses any time to begin the season Olave could very well see a WR1 workload out of the gate. The Saints aggressively moved up in the first round to draft Olave which indicates how high they are on him and likely view him as the heir apparent to Michael Thomas.

Christian Watson could not have landed in a better situation. He landed with one of the greatest quarterbacks of all time. The Packers also lost Davante Adams and Marques Valdes-Scantling in the offseason and vacated an astounding 224 targets. Watson was drafted to play and play early. Young receivers often have to earn Rodgers trust but Watson has the ability to make him fall in love with his YAC ability. Watson has blazing speed and dazzled at the combine. Not only will that match well with a Rodgers deep ball that might be the greatest of all time, but Watson has the ability to turn bubble screens into house calls and should be involved in all aspects of the offense.

The Commanders took Dotson with the 14th overall pick in the first round of the 2022 NFL Draft. Dotson will likely line up as the number 2 receiver opposite Terry McLaurin this season. Curtis Samuel is still working his way back from injury. Even if Samuel is healthy, he is better suited for the slot. There is a chance the Commanders will likely be a run-first team and use Wentz as a glorified game manager. There should still be enough volume for Dotson to be fantasy relevant. Dotson has speed and could explode for a few big weeks this fantasy season. Though Wentz can be erratic, he did rank fourth in deep ball accuracy last season.

Coming in at #2 on my list is this incredible catch from Jahan Dotson against Auburn. Beaver Stadium was rocking after this snag from Jahan. Chris Fowler’s call on this play is amazing as well. 🦁 pic.twitter.com/0O8Mnjl7Jr

Once considered a fantasy sleeper, Cook is now slated to be drafted in the first round of most rookie drafts. Cook never had more than 12 carries in a game while playing for Georgia. The Bills drafted him in the second round for his pass-catching ability and explosive speed. Devin Singletary was finally utilized as a bell-cow running back down the stretch last season. He found himself a top 10 running back in the second half of the season. Cook may never see that type of usage. However, he is stepping into an offense that was top 5 in just about every major statistical category. Josh Allen continues to ascend to the top of QB rankings everywhere. He will love the addition of Cook for his YAC ability. In PPR leagues Cook will hold weekly value right out of the gate.

Highest passer rating generated when targeted as a receiver since 2020

Make sure you check SGPN regularly for updates to our 2022 NFL dynasty rankings and all things fantasy.