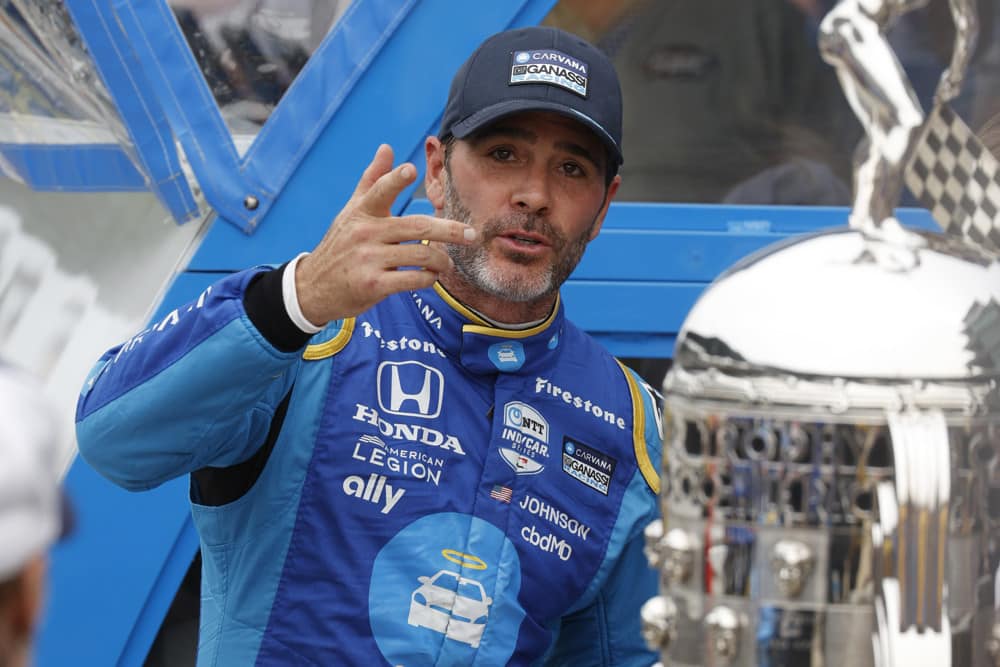 The 106th running of the Indianapolis 500 will take place on Sunday. Often touted as the “Greatest Spectacle in Racing” it’s part of the Triple Crown of Racing. Along with 24 hours of Le Mans, and the Monaco Grand Prix which also takes place Sunday. This called for a special motorsports’ edition of the (NASCAR Gambling Podcast) where we break down these two prestigious events. Here, we get your ready to kiss the bricks with our Indianapolis 500 Betting Preview.

In 2021 this event was won by Hélio Castroneves. It was the fourth Indy-500 victory for then 46-year-old Castroneves. Coming 20-years after his first Indy-500 win in 2001. Castroneves is back again this year but has his work cut out for him as he starts 27th on the grid.

Thirty-three drivers, 200 laps, 500 miles, one bottle of cold milk. All of that is what is awaiting us on Sunday afternoon. Scott Dixon claimed the top spot on the grid with an average speed of 234.046 mph. The field average of 231.023 mph is the fastest in race history. Current point standings leader Will Power will take the green from the 11th starting position. Right next to Power in the 12th starting spot is 7-time NASCAR Cup Series champion Jimmie Johnson. Johnson will be making his first Indy-500 attempt. However, he is no stranger to victory lane here, kissing the bricks four different times after winning NASCAR’s brickyard 400. An event that was held at the track from 1994-2020.

I talked on the podcast about my love for Palou this week. He was last year’s runner up in this race and a guy hungry for a win in 2022. Palou sits second in the points standings to his opponent here, Will Power. A few weeks ago in Birmingham, Palou ran second. He was third at the Long Beach Grand Prix, and second in the season opener at St. Pete. He’s beaten Power head-to-head in 3 of 5 events this year. Palou was also the fastest in FP8 practice this week at Indy.

As he prepares for his first Indy 500, family time remains important for @JimmieJohnson, who has been doing some commuting lately between Charlotte and Indy.

"I’m ready to take a few days off, get my batteries recharged."

I’m a NASCAR guy above all. So of course, I had to include the two former full-time NASCAR stars. Montoya started off as a Formula 1 driver collecting seven wins there before moving over to NASCAR in 2007. Over nine full-time seasons Montoya collected two Cup Series wins. In 2014 Montoya returned to open-wheel cars heading to IndyCar full time. Jimmie Johnson of course is a 7-time NASCAR champion, sharing that accomplishment with only Richard Petty and the late Dale Earnhardt Sr.

Montoya is now only a part-time IndyCar driver, and Johnson is in the seat full-time in 2022 after running only the road courses in 2021. Johnson was faster in all but one practice session for this race. Johnson was consistently a top-5 car in practice while Montoya’s best session he was 18th. Montoya was mostly hanging out around the 30th position in practice sessions though. If Johnson can avoid the nerves and pressure and not make a mistake like he almost did in qualifying. This matchup doesn’t even seem close.

Palou has finished top-3 three times this season. And top-7 in every race except the GMR Grand Prix. That race was a stormy mess, and the rain tires and weather didn’t agree with Palou’s car after being one of the fastest in practice and qualifying second. Palou has been fast this season and I’ve already talked about how I am all over the 2021 NTT INDYCAR Series Champion. I like him to win the race but absolutely love him to finish Top-10.

On the podcast I gave out Alex Palou at +600 as the winner, I love Palou this week as you can see in my other bets. But I want to spread out the bets a little for a big race like this. So instead of a more favored driver and a longshot, I have two mid to long shot range guys I really like and find great value in.

Power is a veteran and the 2018 Indy-500 champion. He sits fifth all-time in IndyCar wins with 38. He also races for the team with the most Indy-500 victories. Penske Racing has won the Indianapolis 500 a record 18 times. Power hasn’t seen victory yet this year, but is the current point standings leader and showing at age 41 he’s not slowing down. I did pick against him in a head to head above. But this 18/1 is a wonderful insurance policy to hold!

The 22-year-old second generation IndyCar driver is a blooming star. The youngest driver to ever win in IndyCar at just 18 years of age. Now he has 7 IndyCar wins to his name and is all the talk of being the next star in F1. Herta won the most recent race at the GMR Grand Prix of Indianapolis. Look for the Andretti Autosport driver to be in the mix on Sunday.

A special edition of the NASCAR gambling podcast! This time it’s not NASCAR it’s ⁦@F1⁩ and ⁦@IndyCar⁩! It’s a HUGE weekend in racing across the world and we have you covered!⁦@rjvillagomez⁩ & ⁦@Husker_Zeeb⁩’s ⁦@TheSGPNetwork⁩ https://t.co/yJ28Hq2Zy0

Honda IndyCar Grand Prix of Toronto Preview: How to Watch and Best Bets