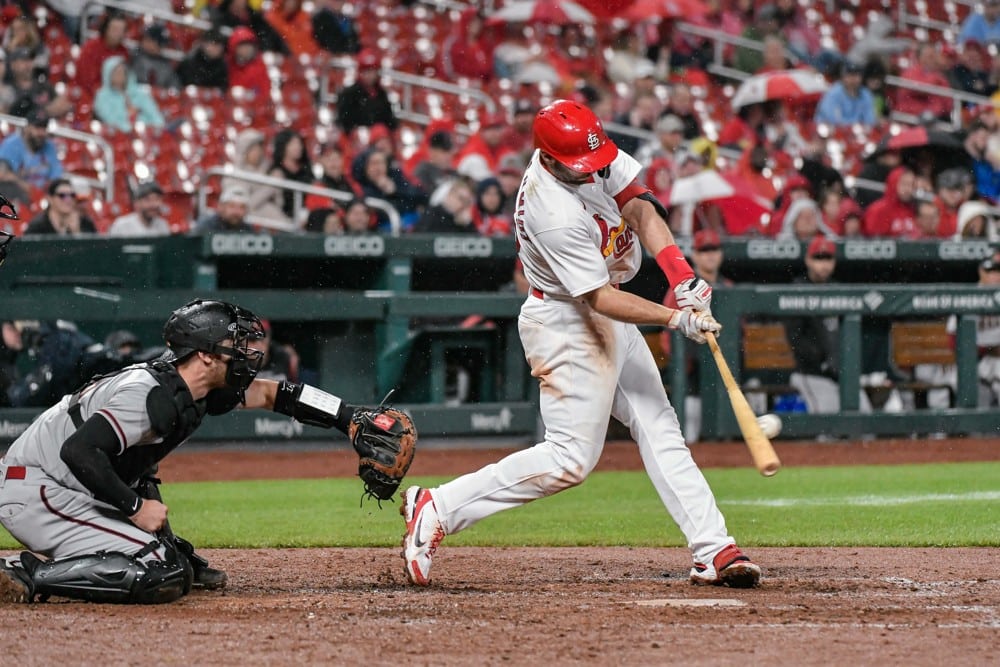 It’s Friday night which means MLB is kicking off another weekend slate of games. All 30 teams are in action, giving us plenty of games to choose from for some MLB player props. I’ll be looking at three of my best MLB player props for tonight’s games, along with two bonus plus-money player props!

Goldschmidt faces off against his old friend Madison Bumgarner (and former team) tonight in St. Louis. The first baseman has thrived against MadBum in his career, going 24-for-71 with five doubles, three home runs, and two triples.

He’s also off to a tremendous start this season. Goldschmidt is 5-for-14 this year against left-handed pitching, including two doubles. Overall, he’s been hot as well. He has multiple hits in two straight games and six of his last seven, let alone multiple total bases. He has at least 2+ TB in eight of his last 13 games, including those six of seven, and that trend should continue tonight against Bumgarner.

We’re sticking with the same game –– and same team –– but switching to the other side of the diamond. Wainwright only had three strikeouts in his last start, but racked up 6+ (19 total) in his first three. That’s three of four starts this season that this prop hit.

Last season, he had at least five strikeouts in 20 of 32 starts (62.5%), which means that the odds should be somewhere around -165, not -115. He struck out six batters in five innings in his lone start against the Diamondbacks last year. This year, Arizona is striking out over nine times per game, 25th-worst in the league.

Wainwright should get at least five strikeouts tonight at home.

The man they call J-Ram has a hit in three straight games and should keep up his hot start tonight in Oakland.

Grichuk is enjoying his new digs at Coors Field. He has an RBI in eight of 14 games overall this season, including five of six at home. He’s hitting in the heart of the Rockies order and the total for this game is set at 10.5 runs with Colorado favored. That means that they should put up at least five or six runs, and Grichuk should be involved.

Why not? Let’s have some fun. The Polar Bear was heated after the benches-clearing incident the other day and now the Mets host the rival Phillies for a three-game set.

I’ll throw a dart with a small play on this.