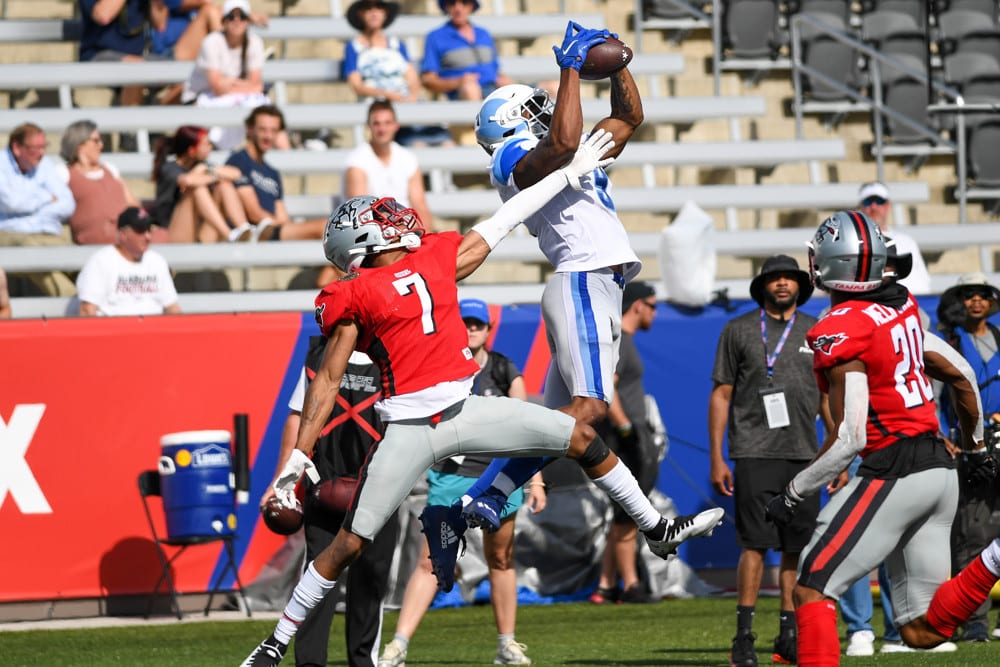 We’ve witnessed two weeks of USFL football, and it hasn’t been disappointing.  Therefore, who can blame anybody for being excited about another week?  This week will feature both undefeated teams facing off against each other.  Also, both teams looking to get their first win are playing each other.  By the end of Week 3 we will have only one team that remains undefeated, and only one team that hasn’t won a game yet.  Let’s break down the action and look at the best USFL Week 3 picks, bets, and predictions.

The first game on our USFL Week 3 picks features two teams coming off a loss.  The Gamblers played a close game against the Stallions and the Bandits were blown out by the Breakers.  The Gamblers have one of the better defenses at forcing turnovers, tied for the most at five.  On the other hand, the Bandits have yet to force a turnover and have only compiled three sacks.  While Jordan Ta’amu was predicted to be the top quarterback by a lot of analysts, last week he threw for only 62 yards and threw his third interception of the season.  On the opposite side, Clayton Thorson of the Gamblers hasn’t put up big numbers.  The quarterbacks have the sixth and eighth most passing yards, respectively.

Because both quarterbacks have struggled, I expect this game to be won by the run game and defense.  Mark Thompson leads the Gamblers’ rushing offense with 164 yards through two games, which leads the USFL in rushing yards.  BJ Emmons, coming in at 12th most yards, for the Bandits has 79 yards.  The Gamblers have the better rush attack and the better defense, and I expect them to upset the Bandits.  Look for the Gamblers to put the same pressure the Breakers did on Ta’amu to make him uncomfortable and control the game script.  Because the Gamblers’ offense doesn’t seem to be where the Breakers’ offense is, I’m targeting the under.

The game between the Stallions and Breakers was switched to primetime on Saturday night.  Who can blame the league for wanting to get more eyes on this game featuring the two remaining undefeated teams in the league?  After Stallions QB1 Alex McGough went down with an ankle injury in Week 1, J’Mar Smith came back and led them to a comeback win.  Smith continued to look impressive in Week 2, throwing for 229 yards and two touchdowns.  The Stallions’ run game was also impressive in Week 2 as CJ Marable, Tony Brooks-James, and Smith combined for 169 yards.

However, the Breakers have the best defense in the league, statistically.  They’ve compiled five takeaways, ten sacks, and a defensive touchdown.  While the Stallions’ defense has also looked good, they’ve allowed over 200 more yards than the Breakers.  The defense isn’t the only thing standing out about the Breakers.  Last week Kyle Sloter threw for 266 yards and two touchdowns, as well as rushed for a touchdown as well.  As of now, the Breakers’ offense looks unstoppable, and I don’t expect them to be stopped on Saturday night.  This spread is one of the harder ones among the USFL Week 3 picks.

The first game on Sunday for the USFL Week 3 picks features the two teams that are looking to find their first win.  The Panthers managed only 6 points last week and have scored a league low 18 points.  Shea Patterson hasn’t been able to do much in the air and it may be only a matter of time before we see Paxton Lynch.  The Panthers’ run game has been inconsistent as well, totaling 190 yards in Week 1 and only 74 in Week 2.  They may continue to struggle in the run game against the Maulers, who have allowed the least rushing yards so far this season.  Therefore, the passing game will have to get the ball moving.

The Maulers looked lost in Week 1 but turned it around in Week 2.  They played the Stars very close, losing by seven.  After throwing the ball only 16 times in Week 1, Josh Love threw 39 times in Week 2, completing 21 passes for 236 yards and two touchdowns.  The ability to move the ball in the air also opened the rushing attack, which many thought would be the top rushing offense in the league.  Even though they ran the ball four times less in Week 2 than in Week 1 they ran for the ball for 34 more yards.  This is another game that I am taking the underdog in my USFL Week 3 picks.  I think the Maulers’ defense will give Patterson enough pressure and their offensive momentum from Week 2 will carry over, leading them to a slight victory margin.

Look at that stiff-arm @garrettgro37 😳

The last game on the USFL Week 3 picks slate features a team that seems to still be searching for their offensive identity and one that seems to be clicking on all cylinders.  The Generals looked like they’d be a professional system that could make a two-quarterback system work in Week 1.  However, in Week 2 we saw a different story as they struggled to move the ball as effectively.  While they still got the victory, they only put up ten points while throwing for only 145 yards and rushing for 113.  Flipping Luis Perez and DeAndre Johnson in and out led to predictable play-calling.  The good news is, they’re facing a Stars defense that has allowed the third most yards in the league.  They’ll look to get Darius Victor going early to pound the rock and wear the defense down.

On the other side of the ball, it can be argued that the Stars have been one of the best offenses through two weeks.  They’re led by quarterback Bryan Scott who leads the league in passing yards, touchdowns, completions, attempts, and passing percentage.  Multiple receivers have helped Scott find success.  Jordan Suell, Bug Howard, and Diondre Overton have been there for both games, while Maurice Alexander and Chris Rowland have only been healthy for one each.  This passing attack could get even better when all the receivers are healthy.  Either way, I think the receiving game will continue to have success as Scott has looked like the most complete player in the USFL.