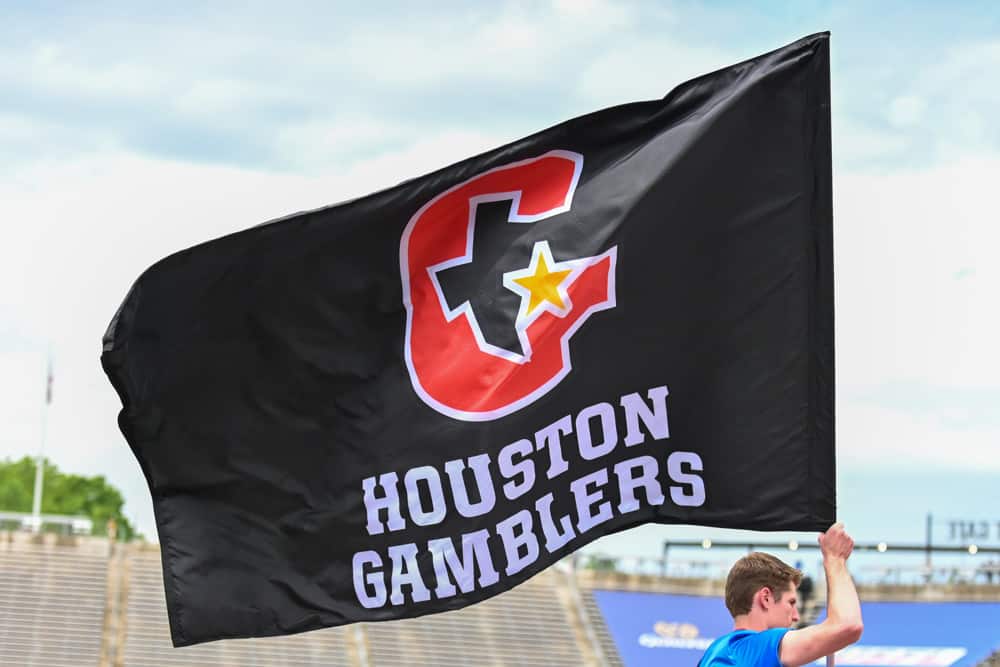 Spring football is always a moving target. Players assume different roles from week to week, or even from minute to minute within a game. With that in mind, here is a running tally of the Houston Gamblers Depth Chart. This will likely fluctuate from day to day, so check back often for the most up-to-date information.

With Clayton Thorson injured, Kenji Bahar has stepped in and led the Houston Gamblers depth chart.  Bahar has done a fair job, but last week was his best week yet.  Not only did he help the Gamblers win their second game of the season, but they handed the Stallions their first loss of the season.  While the Gamblers aren’t going to do anything in the post-season at least they can hang their hats on being the first to beat the undefeated.  Bajar went 16 for 24, throwing for 164 yards and a touchdown.  He also ran six times for 36 yards.

What a play to pick up a huge first down 💪

What happened to the Houston Gamblers depth chart at running back?  Mark Thompson once led the league in rushing and was one of the best running backs in the league.  However, coming back from injury he totaled five carries for negative nine yards.  Devwah Whaley led the team in carries, with 11, but only managed 15 yards.  Dalyn Dawkins was inactive, though he’s been second on the Houston Gamblers depth chart as far as touch percentage goes.  Benny LeMay played his first game last week but only carried the ball two times for -13 yards.  If you don’t count Bahar’s talented running, the Gamblers carried the ball 18 times for -7 yards.

There were a ton of expectations for JoJo Ward going into the season after a good career at Hawaii however, he finds himself at the bottom of the Houston Gamblers depth chart.  Teo Redding had also been trending up but was only targeted once last week.  Isaiah Zuber has been the leader of the wide receiver group all year, even though he was only targeted three times for 31 yards last week.  He rejuvenated his day with a touchdown.  Last week, however, Tyler Palka was the top wide receiver.  He was targeted nine times, converting six of them for 83 yards.

The tight ends on the Houston Gamblers depth chart are mainly used in the running attack.  This week, Julien Allen finally cracked 100 yards for the season, however, neither one of these guysise putting up big numbers.  Allen has a slight hold over Brandon Barnes, even though Barnes started as the top tight end on the depth chart.