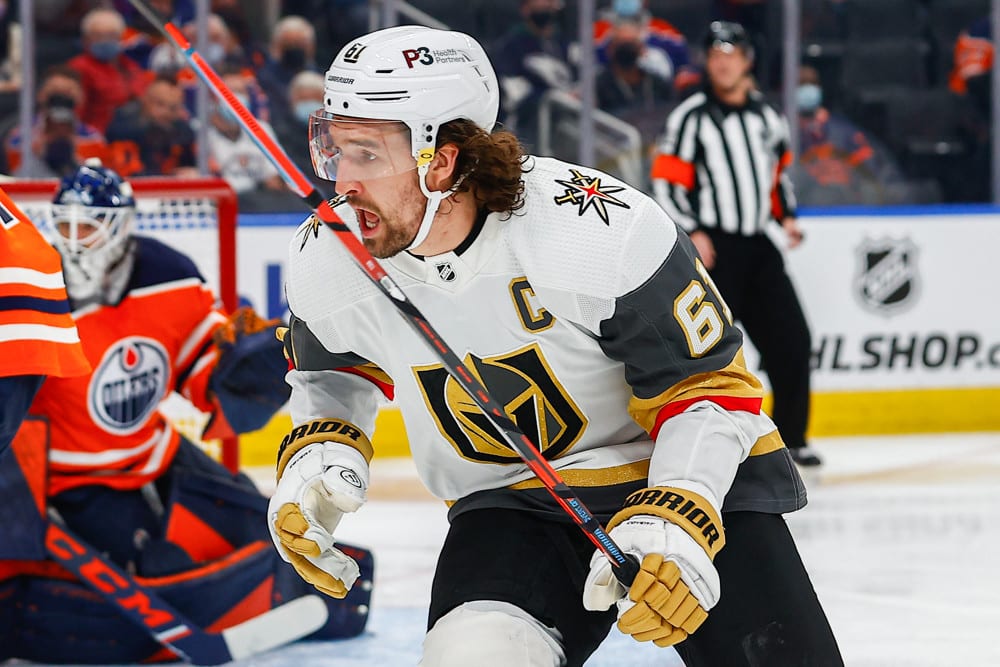 The NHL is coming down into the home stretch. There are just two weeks left in the season and teams are making their final pushes for the playoffs. Well, in the Western Conference at least. The Eastern Conference’s playoff teams are set with only positioning to play for. Nevertheless, there are a whopping 14 games throughout the day on Saturday. Let’s get into the NHL Picks, Predictions, and Best Bets for Saturday.

I’m going to focus on a few of the marquee matchups of the day: Penguins vs. Bruins, Wild vs. Blues, Golden Knights vs. Oilers, Hurricanes vs. Avalanche. All of these matchups could very well be a playoff preview in the first round all the way to the Stanley Cup Final.

The Bruins come into this game with three straight losses and a 5-5-0 record in their last 10 games. However, they’ve played much better than their record shows as they have a 59.04% xGF at 5-on-5 play in that span, second-best in the league. They outshot each of their last opponents by more than 10 shots (41-30 and 42-32) and came up on the losing end.

Casey DeSmith is expected to start for the Penguins as Tristan Jarry deals with a minor injury. DeSmith is just 8-4-5 this season with a .906 SV% and 2.94 GAA. He gave up four goals on 37 shots in a shootout loss on Tuesday.

This is the ABC Game of the Week and for good reason. The Wild and Blues are locked in the Central Division standings at 98 points each, but St. Louis has played one more game. Nevertheless, the winner of this game will have sole possession of second place.

The home-ice advantage is going to be big in this game. St. Louis is 25-9-4 at home while Minnesota is just 20-14-4 on the road. The home team has won four of the last five meetings, and the Wild have lost six straight in St. Louis.

The Wild were outshot by nine and taken to overtime by Dallas on Thursday. The Blues have won seven in a row, outscoring opponents 35-14 in that span, and are 9-0-1 in their last 10 games with a goal differential of 48-24.

St. Louis is playing extremely well and will continue that on home ice at just -110 in a pick ’em game.

The afternoon continues with another great matchup. The Golden Knights are getting healthy and they’re on a roll, going 7-2-1 in their last 10 games as they push toward the playoffs. Edmonton has also been hot, however, also going 7-2-1 in its past 10.

Vegas went into Calgary on Thursday night and poured it on in a 6-1 win. This was after outshooting the Canucks 45-27 in an overtime loss –– a game they trailed 3-1 and 4-2 in the second period.

The Oilers beat the Predators on Thursday in a must-win situation, but I don’t think they can handle this Vegas squad right now.

Mark Stone is back. Max Pacioretty is back. The Golden Knights are back. Take them tonight at plus money against an inconsistent Edmonton squad.

The nightcap is a potential Stanley Cup Final preview. The Avalanche are the Western Conference favorites at +150 and the Hurricanes (+400) behind only the Panthers (+225) to win the East.

This is another game where the home team should reign supreme. Colorado is a staggering 30-4-3 at home this season while Carolina is 21-11-4 on the road.

The Avs have been absolutely rolling recently with eight straight wins (34-18 goal differential) and a 13-1-1 record in their last 15 (57-32 goal differential). On the other hand, the Canes were shut out by Detroit on Thursday, lost to the Islanders last week, and fell to the Wild and Sabres earlier this month.

Count on Colorado as home favorites to take down the mighty Canes.

This game should also stay under the total. Carolina won the first meeting last month 2-0 and the Avalanche have played a lot of low-scoring games against playoff teams recently (3-2 OT at Minnesota, 2-1 at Calgary, 3-2 vs. Pittsburgh, 2-1 SO at Edmonton).

It’s going to be a playoff-like atmosphere in Colorado which means a close, low-scoring game.