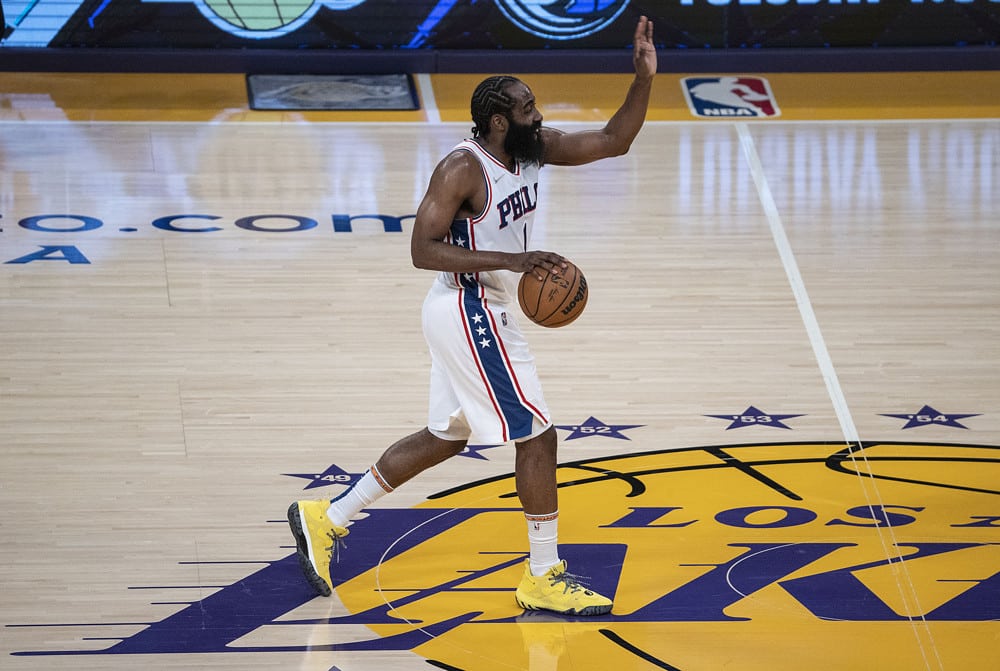 The real playoffs are finally upon us. Four series get kicked off today, with the other four getting started on Easter Sunday. DraftKings is giving you plenty of different slates to get your NBA DFS feet wet this weekend, but we’ll take a look at the primetime action this Saturday. The two frontrunners for MVP are in action, but I may be fading both of them. Check out who I’m playing instead.

Harden will enter the playoffs, as many stars will, well-rested. However, before he started taking time off, his assist numbers were through the roof. He posted 14, 15, and 14 respectively over his last three games. I really like this in the playoffs because even if the scoring is going through Joel Embiid, Harden is going to cover his NBA DFS cost. Plus, if he gets hot himself, he’ll be a play that moves you into the green.

I’ve been riding Thompson for the majority of the end-of-season run. He’s been white-hot from three and seems to be getting the rock more and more as the season progresses. Somehow, his NBA DFS cost has still not caught up to where it ought to be. He’s averaged seven three-pointers per game over the last three he played, which makes getting him under 8k too good to pass on.

I’m always a little hesitant to go in on rookies in an NBA DFS, particularly early in the playoffs. Barnes is an exception here because of just how well he rebounded down the stretch. He was outplaying projections pretty significantly thanks to his work on the glass. With Philadelphia ranking 22nd in opponent’s rebounding percentage, there’s a good chance he gets his share here too.

Porter isn’t going to blow anyone away with his numbers as of late, which is why you’re getting him in the NBA DFS bargain bin. However, if you’re looking for someone who is going to give you a good baseline of points thanks to pure usage, Porter is a great fill-in there. He’s played at least 25+ minutes in eight of his last nine. He should get plenty of burn here and be a stable play.

For some of the same reasons that I like Scottie Barnes, I like Pascal Siakam. The 76ers only pull down 48.9% of the total rebounds, which put them in the bottom third of the league. Siakam has logged 10+ boards in six of his last seven games. Instead of spending an NBA DFS fortune on Embiid, grab Siakam who hasn’t failed to put up 60.0 fantasy points in three straight.

Down the stretch, with Monte Morris banged up, Hyland lit it up. He closed the season with 30+ fantasy points in each of the last two behind an increased scoring output and spike in dimes. While he may not be able to sustain that entirely if Morris steals minutes, I still like him better than Morris in NBA DFS lineups. Part of that is because I still doubt Morris’s elbow is 100% and Hyland has the hot hand.

Although he may not be available when this series hits the road, I like Thybulle as an NBA DFS bargain bin find for Game 1 of the series. Just like Porter, he logs plenty of minutes and gets a smattering of fantasy points from different categories. That gives him a pretty stable floor from a guy who is barely costing you anything.

Cousins’s time fell off a little late in the year, but I still think he’s a nice play here in the playoffs. He is a guy with lots of experience in the playoffs. If any of their big men wind up in foul trouble, I would expect Cousins to log a lot of minutes in their stay. Regardless, he should grab enough boards to justify his NBA DFS salary.

Make sure to check out all the great NBA coverage we have to offer and be sure to listen to the NBA Gambling Podcast, which airs twice a week. This week the guys are breaking down all the best plays for the coming days and even some info that may help you in your NBA DFS conquests.