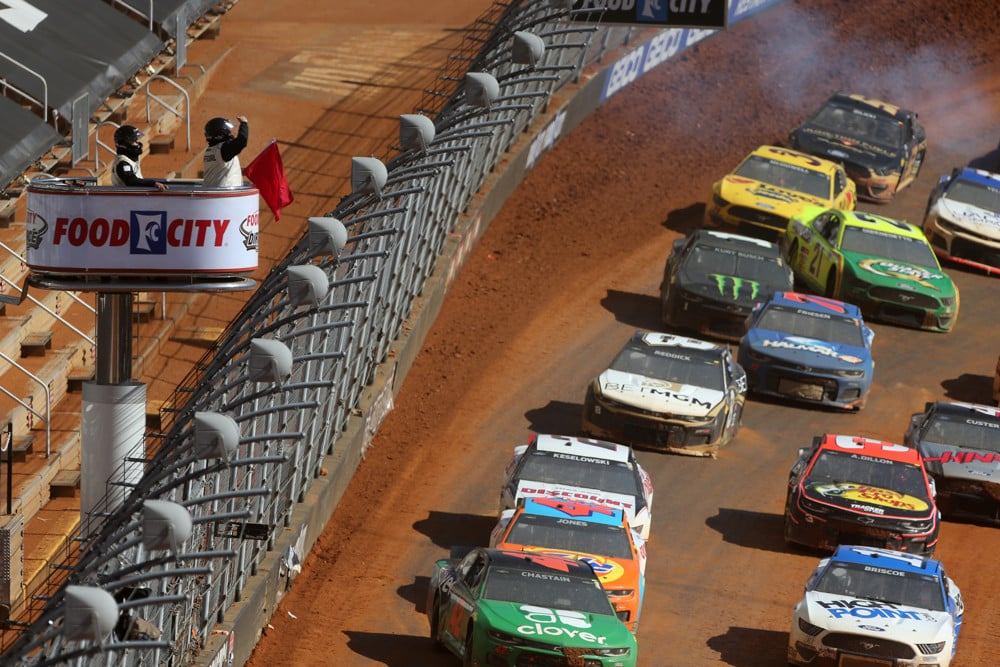 Tick tock William Byron got the clock! In a bit of a less exciting race at Martinsville Byron dominated the second half of the race. In the end, he took home his second clock on the weekend after also winning Thursday’s Truck race. Then fists flew on Friday night in the Xfinity series race. A late race incident lead to punches being threw by Ty Gibbs. Now the focus shifts to the only dirt race on the Cup schedule. The short-track at Bristol Motor Speedway has been covered in 23,000 Square feet of dirt. Get your DFS lineups set with these Food City Dirt Race NASCAR DraftKings plays.

There’s a FIGHT between Ty Gibbs and Sam Mayer!

Last years race on the dirt was nothing short of complete chaos, on the NASCAR GAMBLINGPODCAST we discuss the changes NASCAR has made to the cars and track to make this years event better. Not only is it dirt, it’s the first race on Easter Sunday since 1989, and the firstscheduled race on Easter Sunday since 1970. 1989’s event was a makeup race after 8 feet of snow prevented the March race at Richmond Speedway that year.

Larson is the highest priced driver on the slate. And it’s only because he is arguably the best dirt track driver in the world. In 2020 while suspended from NASCAR competition Larson ran in 97 feature races. Between Sprint Cars, Midgets, Late Models and others, he won 46 of those feature races. In 2021 while competing full time and winning the NASCAR Cup series championship Larson won huge dirt events like the Chili Bowl Nationals, The Kings Royal at Eldora, then the Praire Dirt Classic, followed by the prestigious Knoxville Nationals. The list goes on and on. We didn’t get to see much from him last year due to an early wreck, but look for the dirt king to run well this weekend.

Reddick has started the season with some ups and downs. But, overall he seems to have this Gen-7 Cup car figured out. He also has a background in dirt racing. He was the youngest driver to ever win the pole at the Eldora World 100. On top of that he was also the youngest to win the East Bay Nationals. Even still he was the youngest winner in Lucas Oil Late Model Dirt Series history. Reddick has knocked on the door of a few wins last season and this, is this his week?

Ross has been on fire this season. With a string of four top-3 finishes in a row earlier this season and getting his first career win, Chastain has this new car figured out. Trackhouse Racing was great here last year with Daniel Suarez dominating the middle portion of the race and finishing 4 th place. Nothing has slowed Chastain down yet, keep riding that wave for this Food City Dirt Race NASCAR DraftKings play.

I’m not sure why Stenhouse is priced so low this week. He finished 2nd place here last year, and is another stellar dirt track racer. Stenhouse is one of only 8 drivers to win in the NASCAR Cup series as well as the USAC Silver Crown, National Sprint Car, and National Midget Series. He joins racing legends Mario Andretti, A.J Foyt, Jeff Gordon, Kyle Larson, Ryan Newman, Ken Schrader and Tony Stewart. Sporting a beautiful Irish Spring Soap scheme this week, Stenhouse is looking to clean up on dirt again, something he’s used to doing throughout his career. The price is right for this Food City Dirt Race NASCAR DraftKings driver.