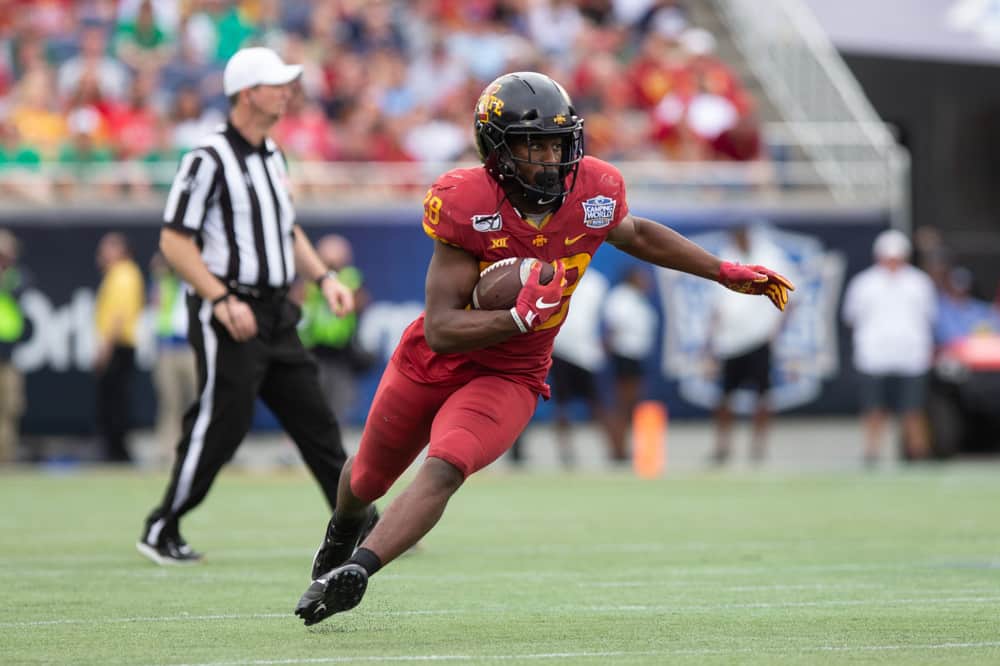 Draft season is in full swing, the time is now to start ranking the top 2022 rookies. Before we know it our dynasty rookie drafts will also be in full swing and there is no better resource than these Dynasty Rookie Rankings.  Due to this we have complied a list of the top 50 rookies for non-superflex dynasty fantasy football. Not only is there a list but there is more! We also highlight a few of the players in each tier.

This tier is headlined by Iowa State running back Breece Hall. The former Cyclone produced back to back 1,400 plus rushing yard and 20 rushing touchdown seasons. He produced 713 yards after contact and forced 74 missed tackles in 2021 alone. While he has all the power in the world he pairs this with great footwork and speed to break a run at any time.

Not to be out done, he is joined by Kenneth Walker of Michigan State and Isaiah Spiller of Texas A&M. Both of these players have question marks around their completeness.  Isaiah Spiller has produced close to 3,000 rushing yards in his career, while adding in 74 receptions for  585  yards and a lone touchdown. As for Kenneth Walker he is a junior transfer who burst onto the scene quite literary. His first carry on the first play of the season for Michigan State was a 75 yard rushing touchdown. He went on to finish with 1,646 yards and 18 touchdowns.

The top wide receiver of the 2022 rookies is Garret Wilson out of Ohio State. Wilson is a polished route runner who has great athleticism and physicality to his game. He finished 2021 with 1,058 receiving yards and 12 touchdowns for the Buckeyes. He is joined by George Pickens, Treylon Burks, Chris Olave and Jameson Williams. Both George Pickens and Treylon Burks bring good size and field stretching abilities to this tier. Treylon Burks also brings great speed and yards after catch ability. However, he lacks a polished route tree unlike Chris Olave and Jameson Williams. Both these players have great speed to their game as well. Chris Olave produced 2,702 receiving yards in his career at Ohio state.  While Jameson Williams transferred from Ohio State to Alabama in 2021, he went on to produce 1,572 receiving yards and 15 touchdowns.

As we take a look at the second tier of the top 2022 rookies we see every position represented. This tier is headlined by Drake London out of USC. London produced 1,084 receiving yards and 7 touchdowns in 2021. This big bodied wide receiver has great ability to win 50/50 balls, as well as take the top off the defense with his speed. Also in this tier we see Malik Willis as the top quarterback in this class. He is a great dual threat quarterback who lacks a polished game. However, he has the highest upside of any quarterback in this 2022 rookie class for fantasy football this is why he still at the top of the position.

We also see the top 2022 rookie tight end in Trey Mcbride out of Colorado State. He is a big physical do it all tight end, with great receiving skills. This is highlighted by his 1,121 receiving yards in 2021. However, he only managed a single touchdown. Along with him we see both Kevin Harris and Kahlil Shakir who were mentioned in our Rookie Sleeper Candidates Article. Zamir White is also in this tier, a player who was a former five star recruit. He has had a few injury issues in college limiting his playing time. He his powerful runner with quick feet and great vision, in the right landing spot he could be the steal of these Dynasty Rookie Rankings.

This tier is full of potential day 2-3 picks that could become a steal in your 2022 rookie drafts this season. Its headlined by a very raw prospect in Christian Watson who has a ton of talent. However, playing in North Dakota St. he was able to lean on his speed to help him win. This will not be the case in the NFL, he has shown the ability to be a versatile weapon though which the NFL loves to see. He has drawn comps to Deebo Samuel. If this is an indication of what he could be, then he’s a great second round pick based on these Dynasty Rookie Rankings.

There are also three quarterbacks in this tier, Kenny Pickett, Matt Corral and Sam Howell. All are decent prospects, although they are lacking for fantasy purposes. These guys will land as fringe QB2s for their career most likely. Of course there is the outside chance one puts everything together and has a Justin Hebert or Josh Allen type of rise. For this reason its well worth a third round rookie pick.

If you like role specific running backs this is the tier for you. Players like Tyler Badie, Tyler Goodson, and Kyren Williams will most likely fall into receiving roles at the next level. While Brian Robinson, Tyler Allgeier, Zonovan Knight and Jermoe Ford will be first and second down, back up running backs. One player who could emerge as a three down back is Jashuan Corbin who we highlighted in our 2022 Rookie Sleeper Candidates.

As the best of the rest is concerned we have a lot of potential dart throws that could pay off in these Dynasty Rookie Rankings. A recent riser is Pierre Strong out of South Dakota St., who recently ran a 4.37 40-yard dash at the combine. In 2021 he rushed for 1,686 yards and 18 touchdowns for the Jackrabbits. If big bodied running backs are your cup of tea there is also Dameon Pierce, Abram Smith, Hassan Haskins and Keaontay Ingram. All of whom are over 200 lbs and play with great physicality. However, all need to clean up areas in their game before they can succeed at the NFL level. If they do this though they could emerge as great late round rookie picks.

We also see a good amount of athletic tight ends in this tier who could emerge as good pass catching threats in the NFL.  Jelani Woods headlines them. At 6-7, 259 lbs he is a monster. He ran a 4.61 40 yard dash at the combine. For a man this size, he was moving. However, his tape also shows good hands and decent routes. He definitely could make a case for a tier jump post draft. Isaiah Likely is another very athletic and productive tight end out of Coastal Carolina. Who produced 912 receiving yards and 12 touchdowns in 2021. He is definitely a player you should keep in mind late in your 2022 rookie drafts.