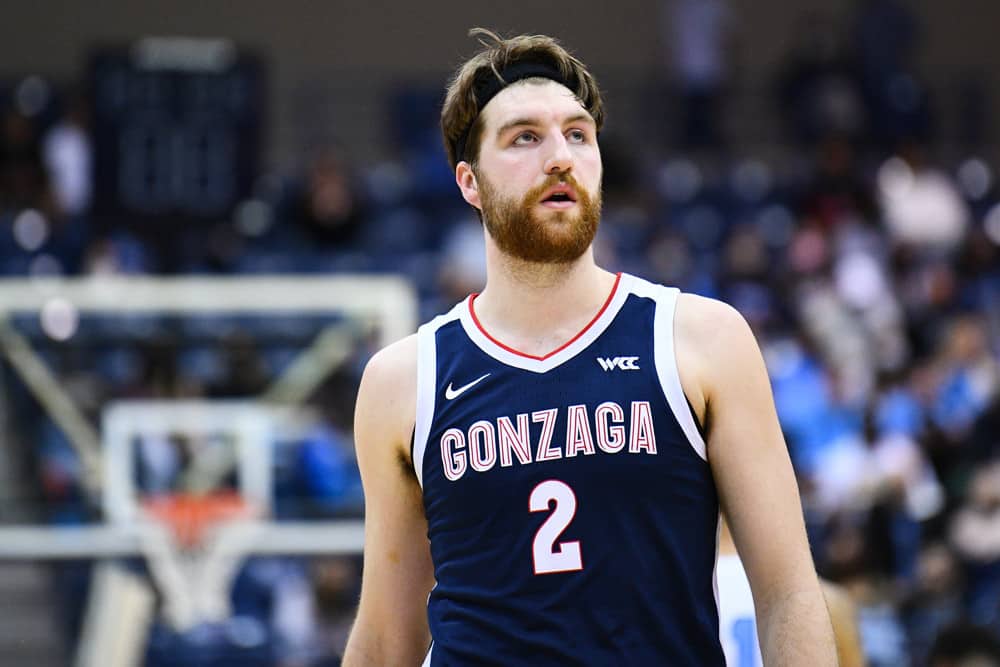 It’s Sweet 16 time, college basketball fans. The opening two rounds were excellent and we’re just getting warmed up. We start things back up on Thursday with the East region playing in Philly and the West region in San Francisco. By the end of the weekend, we’ll have our Final Four.  Let’s take a look at Thursday’s matchups and highlight some of my favorite bets of the day in our NCAA Tournament Sweet 16 Picks: College Basketball Best Bets For Thursday, March 24th.

Gonzaga may not have played their best basketball of the season in the opening two rounds but they survived and they advanced. If you haven’t noticed, their veteran big man, Drew Timme, might be front runner for Tournament MVP. The junior from Richardson, Texas put up 32 and 13 vs Georgia State and followed up that stellar performance with 25 and 14 against Memphis. I’d expect another outstanding game against the limited Razorback frontcourt.

Drew Timme came up HUGE in the clutch for @ZagMBB 😤

In general, I like Gonzaga to finally kick things into high gear and win this game by double digits while covering the spread. However, my favorite bet is for Drew Timme to score more than 19.5 points. As I eluded to earlier, Arkansas only ranks 209th in the country in height. They regularly start four perimeter players along with 6-10 sophomore Jaylin Williams. Williams has a bright future but he’s very young and will struggle to contain Timme. If Arkansas forces the Zags to go small, it will be Timme getting most of the minutes (31.5 mins over the last two games) and Chet Holmgren riding the pine.

All credit to Juwan Howard and Michigan for making it to the Sweet 16 after just barely sneaking into the tournament. Hunter Dickinson has been putting the team on his back and will obviously be a tough matchup for Villanova. After struggling in the 1H vs Colorado St things finally clicked and they played an excellent 2H before knocking off a top-ranked Tennessee team.

However, this is where the road ends. I love taking a Jay Wright-coached squad with several days to prepare. The Wildcats start four upperclassman led by the all-senior trio of Collin Gillespie, Caleb Daniels, and Jermaine Samuels. These guys will not allow their college careers to end on Thursday night. Also of major importance has been the emergence of Eric Dixon at the 5 spot. Dixon provides some much-needed post presence while also being able to step out and knock down a 3. As difficult as a matchup Dickinson is, let’s see how he defends a big man with range.

Villanova is also top 30 team at not turning the ball over, top 50 at shooting the three-ball, and the best free-throw shooting team in the country. Not to mention, they should have a major coaching advantage. Expect a close game where Villanova pulls away late and buries all their freebies to ensure the win and the cover.

This is not a good matchup for Duke. Texas Tech comes into this game with the top-ranked defense in the country and one of the oldest teams in the tournament. The average age of Texas Tech’s starting five is 22 years of age compared to just 19 for Duke. Furthermore, this has been the first NCAA tournament for Duke’s entire starting lineup.

The only player with any NCAAs experience on the Blue Devils is reserve Theo John (a backup on Marquette when they lost in the first round in 2019) and Joey Baker (played 7 mins in the first round blowout vs NDSU in 2019). Meanwhile, the Red Raiders played in two tournament games a season ago and brought in Kevin Obanor from an Oral Roberts team that went to the Sweet 16. If you recall, Obanor dropped 30 on Ohio State in Round 1 last year and 28 on Florida in Round 2.

So not only is Duke extremely young and inexperienced but they’ve been playing atrocious defense of late. Disregard the game vs CF Fullerton, and Duke’s last 5 opponents are averaging over 81 points per game. I’m not a big fan of the Red Raider offense but the Blue Devils have had a hard time stopping anyone of note lately. I’m a Duke fan and I hope I’m wrong, but fandom aside, I like Texas Tech here.

This should be a great game to cap off Thursday night. While I expect a relatively high-scoring affair that should come down to the wire, I’m looking to fade the Arizona defense. While they technically have a top 20 adjusted D on KenPom, they’ve been regularly allowing opponents to at least reach the mid 70’s recently. Plus, I’d argue their interior defense is better than on the perimeter and the backcourt is where Houston shines.

When looking at prop bets for this game, I think both Kyler Edwards and Taze Moore can go over 13.5, but I’ll go with Jamal Shead over 10.5. Shead is coming off a game against Illinois where the sophomore put up 18 points in 37 minutes. It was the most points and most shot attempts he’s registered in the last 10 games. While some may think regression is coming, I believe he’s finding his groove and his teammates’ confidence in him is increasing. On the season, he’s averaging 30 minutes and 9.8 points a game so 10.5 in this matchup is reasonable and definitely achievable.

Illinois and Houston were tied mid-way through the 2nd half, until Jamal Shead decided to completely take over the game. (Look at some of these floaters 🤧)@Thejshead | @Jaylenshead | @UHCougarMBK pic.twitter.com/qwL0DzrAbF

I have Houston surprising the Arizona Wildcats and winning this game based primarily on their strong perimeter players. Of course, that includes Jamal Shead as he clears the 10.5 with ease.