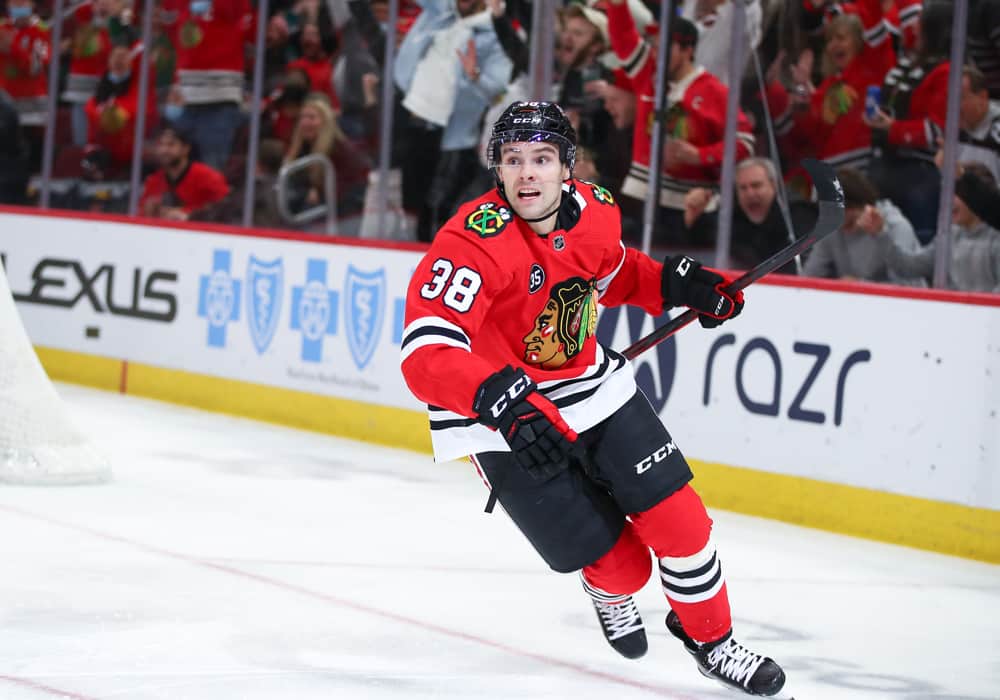 We’re just days away from the close of the 2022 NHL Trade Deadline. We’ve already seen a lot of movement around the league, and I’m sure a few more moves are still in play by Monday. This article will review recent trades and how they affect the players’ fantasy values in their new scenarios.

Brandon Hagel is a definite buy candidate after this trade. He’s available in 89% of fantasy hockey leagues; he’s an easy target on the waiver wire. Before being traded, Hagel was playing well for Chicago, registering three goals and three assists through the team’s last four games. The recent spur of production clearly caught Tampa Bay’s attention.

This season, Hagel averages 5.17 fantasy ppg, but I expect this number to climb while playing for the Lightning. Hagel has 37 points in 55 games; the scoring hasn’t been the issue. However, he’s lost value from his plus/minus rating while playing for a Chicago club that’s allowed the 9th most goals in the NHL this season.

Now he transitions to the Lightning, who allow the 8th fewest goals this season. Playing in Tampa will help his plus/minus rating, and he’ll offer fewer opportunities for harmful production in fantasy hockey. I believe he’ll play above his average of 5.17 for the remainder of the season; Tampa Bay plays better defense and will look to get Hagel extra ice time. He’s already listed on the second power-play unit, and don’t be surprised if he surpasses Ondrej Palat on the depth chart soon; Palat’s isn’t living up to last year’s production.

Coache’s Video: 🚨NHL TRADE🚨@TBLightning Say hello to your new player, BRANDON HAGEL, see all of his goals (21) from this season with the @NHLBlackhawks below ⬇️⬇️⬇️

Calle Jarnkrok to the Calgary Flames

While Jarnkrok doesn’t have much curb appeal from his production this season or any other season, I’m still oddly interested in him after shifting over to Calgary. He’s an eight-year veteran who’s typically relegated to the bottom six of any lineup that employs him. Seattle grabbed him in the expansion draft, but the experiment hasn’t worked out; Calle has just 26 points through 49 games and has a plus/minus rating of -15.

Jarnkrok is available in 97% of fantasy hockey leagues, and, for a good reason, he’s barely had a pulse in the box score this year. However, he’ll now be playing alongside Tyler Toffoli and Andrew Mangiapane on the Flames’ third line, and this is where my interest comes in. He’s now playing on a team that has allowed the 2nd fewest goals in the NHL; while getting lineup upgrades to boost his value.

Toffoli and Mangiapane both have solid production this year. They should help boost Jarnkrok’s stats and make him relevant in fantasy hockey. Both players average over 6.50 fantasy ppg. Now, this is not a declaration to pick up Jarnkrok; he’s 1000% Watch List material, not necessarily a must start or pick up at this time. So let’s keep him holstered for now and wait for some positive games before committing him to our rosters.

Check out the Calle Jarnkrok goal that put Seattle on the board!#SeaKraken #LeafsForever #TORvsSEA #SeattleKraken pic.twitter.com/hNq3Sm0kzj

Frank Vatrano is another player whose production should rise post-trade. The Panthers were loaded with talent and didn’t leave Vatrano with many opportunities to play in the top six. However, he’ll be playing on line two for the Rangers, alongside Ryan Strome and Artemi Panarin. It’s a significant upgrade over 4th line opportunities in Florida; it means more minutes and scoring opportunities.

He’s another player with a low ownership rate, clocking in with 94% availability rate in fantasy hockey. While the production hasn’t been there for him this season, I’m still willing to buy him now. The Rangers will look to make him a focal point of their lineup, which wasn’t a luxury he had while playing for the Panthers. Vatrano has just ten goals, and nine assists through 49 games played this season; I expect this pace of production to climb in New York.

He’s a solid stash option in fantasy hockey; very little to no risk to adding him if you’re looking for a streaming option down the back end of the regular season and into the fantasy playoffs.

That is New York Rangers forward Frank Vatrano to you. pic.twitter.com/0zAlTg005h

Josh Manson to the Colorado Avalanche

There isn’t much to report here for Manson. It’s a better situation playing for a winning team like the Avalanche, but he’s not a consistent producer in fantasy hockey. Instead, Manson is a stay-at-home defenseman whose skill set doesn’t translate well into our fantasy lineups. He doesn’t look to get the puck to the net with any frequency.

Throw him on your watch list if you are desperate for defensive production, but I don’t believe this trade does much but help him raise his plus/minus rating, even that won’t do enough for him to earn a spot on our fantasy rosters. Nothing to see here, kids.

Ben Chiarot to the Florida Panthers

Ben Chiarot is a buy candidate based on his new landing spot with the Panthers. He’s yet to make his debut with Florida, but I expect big things from him once he does. He looks to get the puck to the net and is strong on the puck in the offensive zone. Chiarot has seven goals and 11 assists through 54 games this season.

He was a -18 while playing in Montreal to start the year. The Canadians rank 1st in goals against the NHL, the Panthers rank 18th. Chiarot’s value should soar while playing on a more well-rounded roster. In addition to the upgrade on the back-end play, the Panthers lead the league in scoring; Chiarot could provide even more offense once he suits up for Florida. Chiarot is available in 77% of fantasy hockey leagues; he’s an easy buy candidate.

Coache’s Video: 🚨NHL TRADE🚨@FlaPanthers Say hello to your new player, BEN CHIAROT, see all of his points (18) from this season with the @CanadiensMTL below ⬇️⬇️⬇️