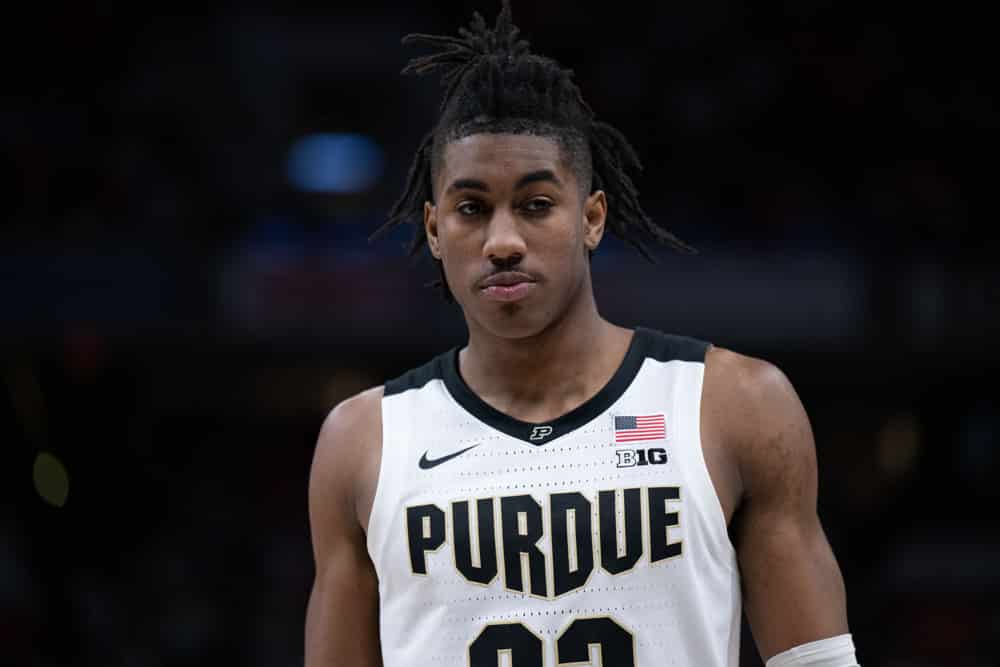 We’re in the thick of it now. The games are coming fast and furious and hopefully, we’re all having a profitable start to the weekend. Earlier in the week, I put out a column highlighting my favorite DFS plays for Thursday. Well, here’s my Friday edition. Again, I’ll break down each region from a DFS perspective by reviewing each team’s offensive and defensive rankings and Team Total for the upcoming game. Then, we’ll highlight some high-dollar, middle-of-the-road, and bargain bin options that should pay dividends. Good luck fellow DFSers…

With only two games on the day, it’s slim pickings in the East. From a fantasy perspective, Purdue is the team that stands out the most and Jaden Ivey ($8.3K) is destined to have another stellar performance. The soon-to-be lottery pick averages over 30 fantasy points a game and had a juicy matchup vs Yale. The Bulldogs can’t match the athleticism of Ivey but could hang around in this game long enough to ensure Purdue doesn’t take their foot off the gas.

For a mid-tier option in this region, I like taking my chances on a Yale player going up against the bad Boilermaker defense. In general, The VT/Texas matchup should not yield as much fantasy production. Therefore, I’ll grab Azar Swain at $6.2K. Swain is Yale’s leading scorer (19.2PPG) and plays the most minutes for the Bulldogs. He’s put up over 30 fantasy points in three straight games and is a senior who will be looking to ball out in potentially his last game.

For a cheap guy under $5K, I’ll roll the dice on the Hokies PG Storm Murphy. Murphy is a 5th year senior who followed his coach to Va Tech from Wofford. The price is right for a starter who’s going to log at least 25 minutes and has been north of 20 fantasy points in four straight games. Texas has an excellent defense but the crafty veteran will at least have a solid game, guaranteed.

Perhaps the most obvious big-dollar guy to highlight in this region would be Illinois Kofi Cockburn ($9.1K). It doesn’t take a fantasy savant to point out his plus matchup vs an under-sized mid-major but he’s expensive. I’ll go in a different direction and roster UAB’s Jordan (Jelly) Walker for only $7.4K instead. Houston has a terrific defense but the Blazer guard has been on fire. Walker always has a green light and is never timid to let it fly from deep. In the last four games, Walker has made 19 three-pointers and has put up over 40 fantasy points each time out. Lastly, he also leads UAB in assists so let’s just say the ball is always in his hands.

There are a few bad defenses in this region that I’ll be looking to fade come Friday and Wright State tops the list. Especially with Arizona’s Kerr Kriisa injured, it makes sense to roster a Wildcat perimeter player. While there are a few nice options, I prefer Dalen Terry ($6K ) as he’s been the most consistent. Terry just logged 36 minutes in the PAC12 championship game and put up 15 points, 7 rebounds, and 7 assists. That’s the kind of all-around production I’m looking for.

If I’m looking for a low-priced guy in this region, my sights are on Chattanooga’s Silvio De Sousa ($5K). If the name sounds familiar, he’s a Kansas transfer that once picked up a chair in a scuffle vs K State. He’s also a weapon himself on the interior for the Mocs and just put up 17 points and 14 boards in the conference championship. He’s going to have to be on the floor a lot trying to defend Kofi Cockburn and someone has to grab boards and provide some paint presence for Chattanooga.

There are obviously a couple of defenses in this region where you’ll want to target opposing players. I’m absolutely loving what Jabari Smith ($8.6K) has been doing for Auburn lately and the matchup vs Jacksonville St is perfect. The true freshman is improving with each time he takes the court and has seven straight games with more than 30 fantasy points. The Gamecocks have only have the 235th tallest team in the country so Auburn’s frontcourt will dominate. Walker Kessler ($8.8K) is a fine play as well but I’ll save the $200 and roster Smith.

Miami has few interior options but someone is going to have to defend USC’s Isaiah Mobley. That responsibility will most likely fall on the shoulders of New Zealander Sam Waardenburg ($5.9K). The U’s big man has been playing 35+ minutes per game of late and regularly registers solid fantasy production for a fair price. For example, SW averaged almost 30 fantasy points per game over the course of the ACC tournament. He’s a stat sheet stuffer that will chip in with more than just points and rebounds – against Duke he dished out 7 assists with a couple blocks and couple steals.

If you recall last year’s tournament, Colgate was up big on Arkansas before the Razorbacks stormed back in the 2nd half to win. In that game, Jack Ferguson ($5K) hit three 3’s for the Raiders. He’s now a 5th year senior looking to make a few more shots from beyond the arc in this year’s tourney. Wisconsin doesn’t have as good of a defense as usual and I expect Colgate to play the Badgers tight. In the last three games, Ferguson has put up 50.3, 27.3, and 34.8 fantasy points and he’s only $5K on Friday? Sign me up.

With a shortage of high-priced studs in this bracket, your best bet is one of the Duke Blue Devils. CS Fullerton is the worst defense in the region but picking the right Blue Devil can be tricky. The most dependable is also the most expensive and that’s Paolo Banchero ($9.2K). While I might like top guys in other regions better, there’s no doubting Banchero’s production. Especially against an inferior opponent that probably should have been a 16 seed, rostering the true freshman makes sense.

The game I’m targeting most in this region is the Alabama/Notre Dame matchup and there are a bunch of mid-tier priced guys to choose from. For me, I see ND big man Nate Laszewski for only $6.1K and he has three straight games north of 30 fantasy points. At times this year, it’s been difficult to choose between him and fellow big man Paul Atkinson but it appears Laszewski is currently in better form and he’s cheaper. Say no more.

It depends on what you want from a low-priced option. Are you looking for steady production or a high ceiling? If the former, Alabama’s F Charles Bediako is your guy. The Crimson Tide big man comes in at an affordable price and has put up double-digit fantasy points in 11 straight games. However, during that stretch, he’s only been over 20 three times. The main issue is a lack of dependable minutes. On the season, Bediako averages 17.8 MPG but has the ability to rack up stats when on the court. Against a ND team that regularly plays two big men, there’s a good chance Bediako’s minutes will be up which should result in a 4X or 5X game.