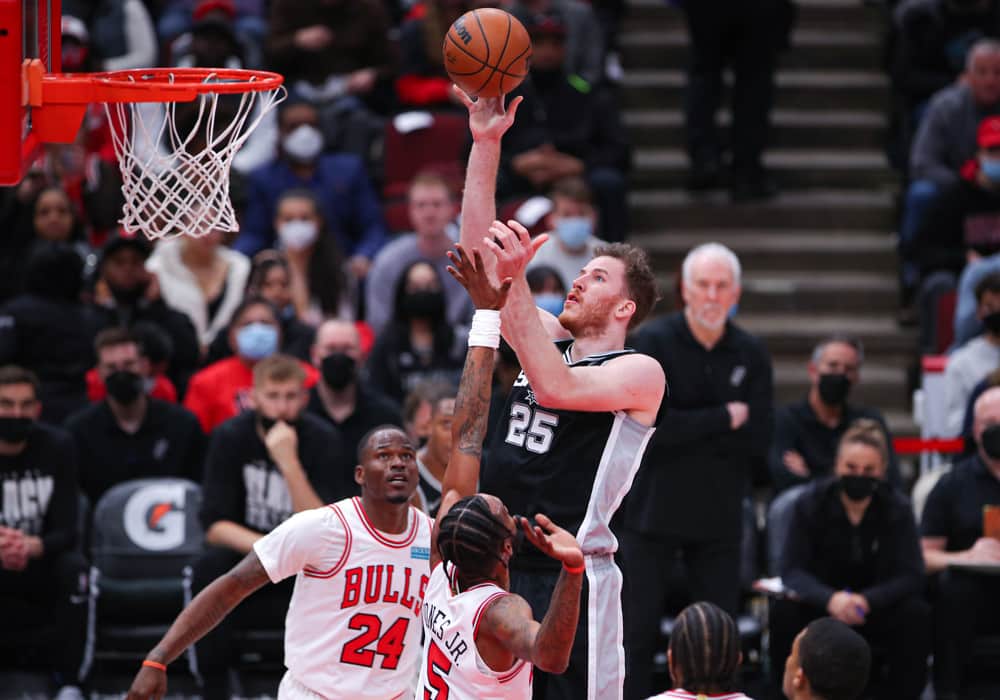 The NBA schedule has tipped into the month of March, which means we’re about a month and a half away from playoffs. At a time when some teams are getting their players a rest and others are driving hard for that final playoff spot, it can be hard to put together an NBA DFS lineup. Luckily, as we are every Thursday, we’re here to help you stitch one together.

We’re kicking things off this week with a big NBA DFS value play. Dosunmu may not cost a lot right now, but he’s low-key on one hell of a run. With the exception of the off-game he had against Memphis last Saturday, Dosunmu has gone for at least 30 fantasy points in each of his last three games. You can extend the streak even further for him. He had solid games scoring in the 20s, 30s, and 40s prior to that streak. The Hawks are a paltry 27th in giving up points to point guards, so I like the chances for a big day here.

Brooklyn is playing in Brooklyn, which of course means that Kyrie Irving will not be in attendance. This will continue to open up more minutes for guys like Curry in these games. With Patty Mills seemingly falling out of favor since the acquisition of the younger Curry, it would appear that these minutes are more than likely going to fall to Seth. In that case, I like where his NBA DFS price is because it doesn’t appear to be taking that factor into account as much as it might.

In this lineup for the week, I have eschewed the use of big-salary guys in favor of a more balanced approach. There are some NBA DFS slates that appear to lend themselves to this strategy a bit better. This is one of them thanks largely to the big-ticket items being overpriced. Plus, there are guys out there like Cunningham, who are relatively cheap. Over the last five games, his fantasy score has never dipped below 32.3. He’s constantly putting up rebounds and assists – the floor is absurdly high.

It may seem surprising that I’m doubling down on Piston forwards, but the Raptors are 22nd in the league at giving up points to opposing power forwards. They also give up a surprising share of the rebounds – sitting right in the middle of the pack in the league. But what makes Grant a great play here is that those things are bonuses to him. Right now, he’s caught fire from deep and is scoring way above his season averages in both points and fantasy points. His NBA DFS cost keeps rising, but it’s one of those situations where it hasn’t quite caught up to his current production levels.

Poeltl, much like Cunningham, is one of the people in this slate that allows me to avoid the big names like DeMar DeRozan. He may not be on a 30-plus point-scoring streak like the Bulls forward, but Poeltl is riding a three-game double-double streak. Over the course of that time, he’s averaging over 50 fantasy points a game. Where else are you going to find NBA DFS production like that under 8k?

When you’re going with Bogdanovic in an NBA DFS lineup, it’s usually because you believe he is going to get hot from three-point land and make his projection just on that. However, I’m going to offer an outside reason – the Serbian’s rebounding numbers are soaring. Averaging under four per game on the season still, he’s only had one game under that in the last three weeks. This raises the floor quite a bit. Of course, I still expect plenty of deep balls from him as well.

Six times in February, Barnes put up 20+ points in a game. Just about every game he trails only De’Aaron Fox in the scoring column. Some thought that the addition of Domantas Sabonis might detract from him a bit, but in fact it has taken the pressure off and allowed him to score a bit more. His fantasy totals have only slipped below 30 once in the last two weeks. With the chance to go off for a big number, I love taking a stab at him in NBA DFS this week.

Kevin Huerter is someone I like as a bargain bin play this week. That’s thanks to his spreading it out on the stat sheet. He doesn’t rely on any one stat to put up a decent number. This also means that he’s not dependent on the team he’s playing. With his defense going up a bit lately and with good production from deep, I think he’s one of the better cheap NBA DFS options.