After going 10-2 on my UFC Vegas 48 picks, I’m now a scorching 41-18 for 2022 picking every UFC fight. Heater alert! The UFC brings us another lackluster UFC Apex card this Saturday, but I still have winning picks for you for it. Let’s keep the good times rolling with my UFC Vegas 49 predictions! 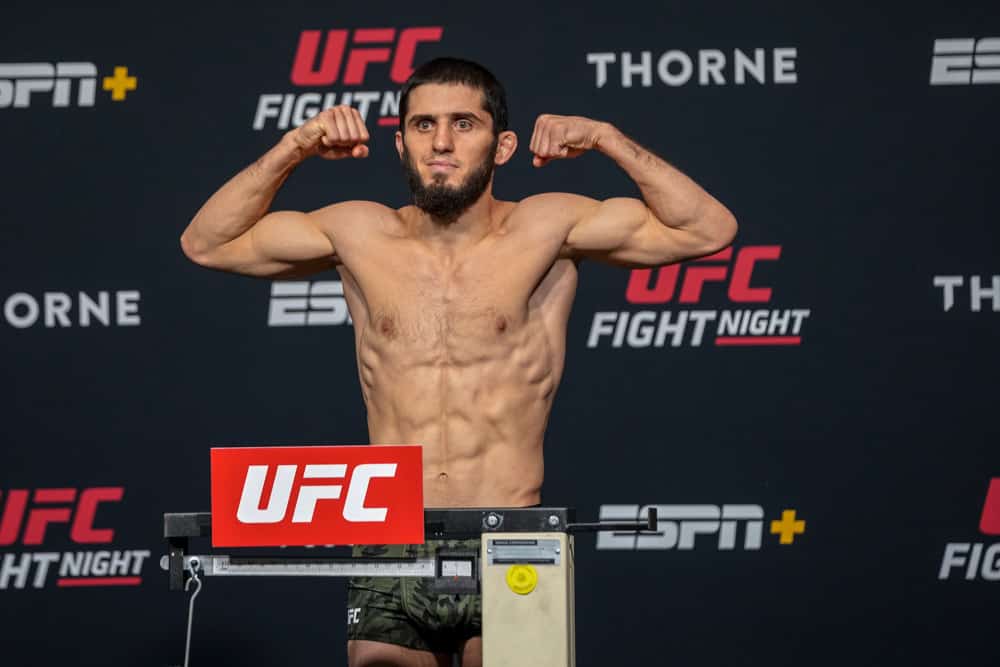 We were all set to have a lightweight number one contender fight in the main event this weekend, then Beniel Dariush went and hurt his ankle. In steps Bobby Green, fresh off beating Nasrat Haqparast on February 12th, for a 160-pound catchweight fight against grappling monster Islam Makhachev. Green has difficulty stopping wrestlers from taking him down, and he enters this fight on super-short notice, so he has no chance. Hence the -900 number beside Makhachev’s name.

The co-main event also sees a fighter stepping in on short notice, although Wellington Turman had almost a month to prepare for Misha Cirkunov. Nonetheless, I’m still picking my fellow Canadian Cirkunov to prevail here. I think his size, strength, and grappling gets the job done.

Two fighters with losing UFC records square off next, and I’m going with ‘Fire Fist’ Ji Yeon Kim to get her UFC record back up to .500 at 4-4. Her striking will be too good for Priscilla Cachoeira to handle, plus she has a huge seven-inch reach advantage to implement it with.

This lightweight battle is a closer fight on paper than the bookies are setting the line at, in my opinion. That said, I’m still siding with the chalk in Arman Tsarukyan. He’s got the striking and the grappling to edge past Joel Alvarez, who has badly missed weight in his last two fights – something to keep an eye on at Friday’s weigh-ins.

Armen Petroysan makes his UFC debut here after earning his spot via Dana White’s Contender Series. He has a very tough debut dance partner in ‘Robocop’ Gregory Rodrigues. Rodrigues has looked great in the early part of his UFC career, winning both his fights in the octagon, part of a four-fight winning streak. His grappling gets the job done against the kickboxer on Saturday.

Two young lightweight contenders clash in the main event of the prelims on Saturday. I’m siding with Ignacio Bahamondes in this matchup, as he’s half a foot taller than Zhu Rong, has four inches of reach on him, and is the far more active striker.

Romana Pascual steps in on short notice in this hastily arranged women’s featherweight fight, which will be her UFC debut. Short notice debuts are never conducive to winning, plus she’s up against a tremendous power-puncher in Josiane Nunes. Nunes is the pick.

Terrance ‘T.Wrecks’ McKinney burst onto the UFC scene last summer, knocking out Matt Frevola in a fight he took on short notice. I’m counting on him having a successful sophomore outing as well, by dispatching Fares Ziam this week.

Bantamweight is not a weight class for old men, and at 32 years old, Alejandro Perez qualifies as one. Jonathan Martinez is five years his junior, has five inches of reach on him and is a more active striker. Winner.

This time I’m going against the stats and taking a short-notice replacement in Ramiz Brahimaj. Grappling will be the name of the game, and Micheal Gillmore doesn’t have enough of it to keep up with Brahimaj.

Two flyweight graduates of DWCS make their debuts in the big show in Saturday’s curtain jerker. Underdog Victor Altamirano is my pick, as I like his resume better than Carlos Hernandez’s, and he’s got three inches of reach on him.