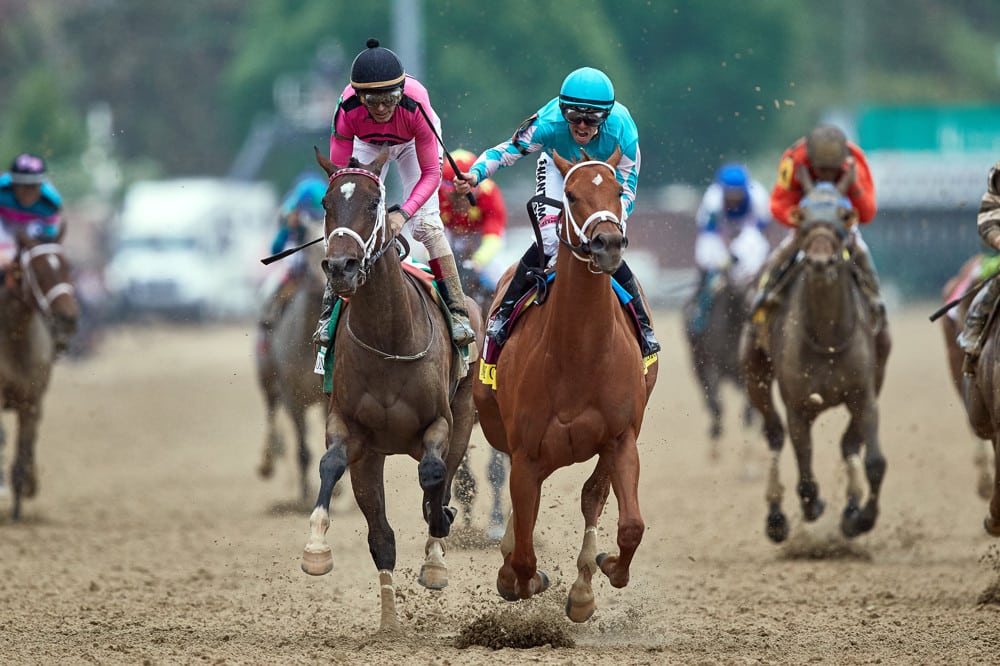 On Wednesday, February 9, StableDuel is hosting a $3,000 contest for the races at Sam Houston Race Track (TX) that features a $25 entry fee and a limit of two entries per person. How do you get in the action at StableDuel? Download the StableDuel app and then pick 10 horses with your $50,000 fantasy budget. If your stable comes out on top, you’re a winner!

How to Play StableDuel

StableDuel is a fantasy horse racing contest where you create a stable of 10 horses from those running on a particular card. Each horse costs a fixed price based upon their morning line odds. You are given an allocation of $50,000 StableDuel dollars to purchase the 10 horses. Favorites are worth considerably more as horses with 2-1 odds cost $9,000 whereas horses with 10-1 odds only cost $1,000. Therefore, you must balance selecting favorites with long shots that you believe will outrun their odds.

Once racing starts you are awarded points based upon the performance of your horses. A total of 60 points goes to the winner and 40 points go to second place. Then, 30 points go to third with 20 points going to fourth. Finally, 10 points going to fifth. Yes, there are negative points awarded for horses that finish at the back of the pack. The key is finding horses that provide good value. While you may not afford to be able to pick the winner every race, being able to identify a horse that is morning line 10-1 who finishes third and gets you 30 points is a huge advantage.

No. In Thursday’s $3,000 contest, the winner will receive around one-third of the prize money. But, typically all players finishing in the top third of entries will win at least $50 to double their entry cost.

Knowing the Names at Sam Houston

When playing a secondary track such as Sam Houston, it’s important to identify successful jockeys and trainers that might not be household names. The biggest name you’ll likely notice on the racing form is Steve Asmussen, the all-time winningest North American trainer, and his horses are always among the favorites. His preferred jockey on his best horses is Stewart Elliot, but make sure to dig past those two. Jockey Lane Luzzi and trainer J.R. Caldwell have teamed up to win 24% of their races at Sam Houston.

Interestingly, the jockey-trainer combination of Ry Eikleberry and Karl Broberg got off to a hot start. Although, they have cooled recently, only winning at a 17% clip and it’s often on heavy favorites. However, each of those men individually has done well. Eikleberry is winning 29% of his mounts this meet and Broberg winning 23% of his entries thus far. Finally, trainer Austin Gustafson has had more success pairing up with Eikleberry this meet. They’ve won 31% of their mounts together with an impressive return on investment.

Horses to Build Your Entry Around

When building a successful StableDuel entry you should always identify three types of horses. One is your safe favorites (3-1 or lower). The next are consistent midshots (between 5-1 and 8-1). Finally some live longshots (10-1 or greater). You don’t need to win every race in StableDuel. But, you need to avoid losing points by selecting a horse that finishes 5th or worse. Below I’ll give you two of each to help get you started for a winning entry.

This is not an overwhelming field for a $10,000 optional claiming race. Close to Midnight is the clear class from a standpoint of Beyer Speed Figures and recent performances at this level. He’s been hit or miss in some allowance races. But, when he’s run at this level, he’s blown away the competition. Additionally, this is a horse that likes a mile as he’s finished on the board in 9 of 16 career efforts. He just wrapped up a year hitting the board in 7 of 11 contests at all distances. His biggest competition, Run Tappy, is stepping up in class after a seven-month layoff. Close to Midnight likes to sit mid-pack and launch a bid. Which, should set him up nicely given the pace he’s likely to get up front.

I love horses that perk up on a new surface. Last time out, Causeway Storm posted the best speed figure of his career when running on the grass for the first time. He’s returning to that surface in race eight. While there are some other nice horses in the field, nobody has posted a speed figure within five points of Causeway Storm’s first effort on the turf. Additionally, his biggest competition, King Kongo, is coming off a seven-month layoff. Admittedly, Causeway Storm has shown some fatigue at a mile but there is minimal pace up front in this field and he should get a nice trip behind the pacesetters to launch a bid late and get the win.

With only nine races on the card and the need to select 10 horses for your StableDuel entry, you’re going to need to select two horses in at least one race. I think race two might be a good candidate for that. As you already read, I like Close to Midnight to win. But, Dobbins G provides nice value as a horse that should run well and nab you a second or third at the worst. He’s run in some big stakes races back in 2019. After a two-year layoff, he came back in November and won a $5,000 claiming race with ease at Remington Park. Now, he’s coming back from a short layoff and running in an appealing spot against horses he’s bested in the past.

Trainer Austin Gustafson and jockey Ry Eikleberry are trusted names on the Sam Houston circuit. Dobbins G is a horse that Gustafson bred. You know he’s going to try and put the horse in the best spot to succeed. I think he outruns his 6-1 morning line odds.

This is a nice allowance field, but Maxi Moon is the type of horse that I love to use in StableDuel. He’s only going to cost you $5000, which is your average horse cost. Plus, he hasn’t finished off the board in his last eight races. In 2021 he was 9-14 hitting the board with five victories. He’s consistent and he can do well in a variety of ways. He’s won while being the pacesetter up front, but he’s also won by coming from off the lead. Having that versatility while breaking from the inside post is critical and he’s got Ry Eikleberry riding him. While a lot of his success came at Hawthorn, he has a very game third last time out at Sam Houston and his speed figures are on-par with the favorites.

In a $15,000 claiming race where a lot of entries are trying turf for the first time or coming back from layoffs, Late Shift presents solid value as a horse that should run competitively. The horses best speed figures have come on turf and those numbers are competitive against most anyone in the field. Additionally, last time out he finished third in a higher-level claiming race. Yes, he finished nine lengths back, but it was a 10-horse field, so he still did well to get a piece of the board compared to the rest of his entrants.

Additionally, his trainer, Brent Davidson is winning 21% of his races when a horse is running the second time back from a layoff, which is the case with Late Shift. Add all of that together along with the fact he excels at these shorter sprints, and you’ve found a horse that seems primed to out run his odds.

It’s always good to finish strong with positive points and the final race is a bit muddled but Toe Tapping Luke presents some intriguing value. Interestingly, last time out he bested Hunk of a Hit by over three lengths, yet his vanquished competitor comes back in this race with shorter odds at 8-1. Meanwhile, Toe Tappin Luke is dropping down slightly in class to a less expensive claiming race and if you cross off his sprint races and those on synthetic, he’s been consistent against better fields at this distance as he’s hit the board four of seven races at a mile.

The horse he lost to in his last race, Mau Mau, came back and won next time out so that was a solid field. Finally, he’s the lone speed. There is not another horse in the field that enjoys running more than mid-pack, which means Toe Tappin Luke is going to get to an easy lead and the far outside post position will only make that easier. I love this horse to net you some significant positive points at a very inexpensive prices to finish up the night.

I hope these horses give you a good starting point for your entry into StableDuel’s $3,000 Contest at Sam Houston. Good luck!

Get all of Matthew’s horse racing coverage by following him on Twitter at @failedtomenace.