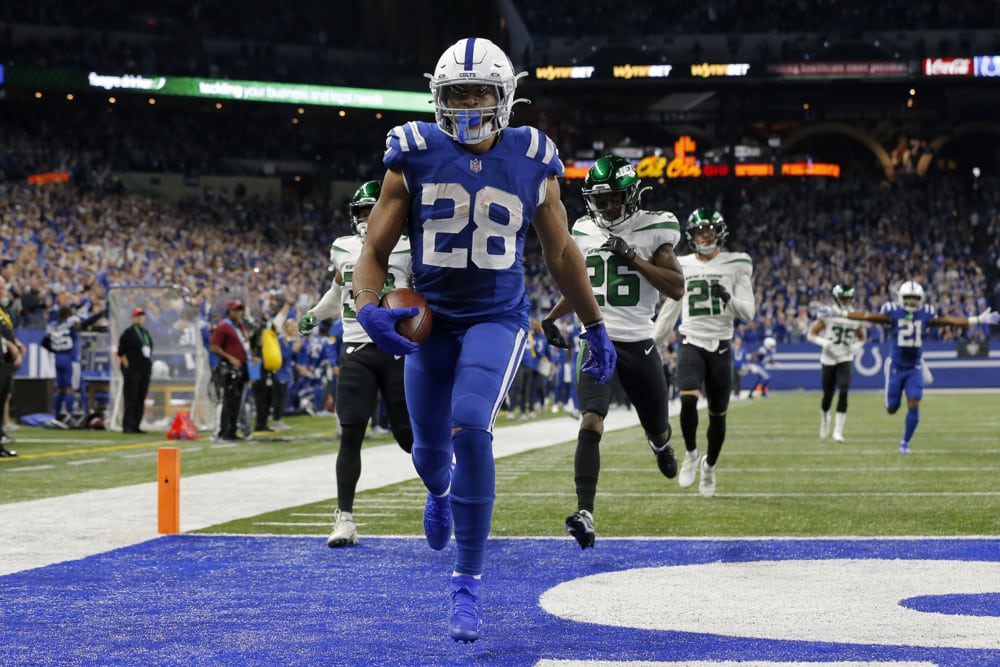 The 2021 NFL Season has come to an end, it was full of surprises and historic performances. Upon reviewing our team’s 2021 projections this became even clearer to me. Our team’s preseason projection tool is a great asset to fantasy managers of all levels, giving a sneak peek into what we expect players’ seasons to be. This tool helped many of us form our 2021 fantasy football teams and lineups. I am here to review them and point out a few key performances. Overall as a team, we did a good job at predicting these players’ season totals. I have broken down a few overachievers, underachievers and a few performances we hit on!

In reviewing our 2021 projections I came across Matthew Stafford who had a great year.  Our team had him projected to come in at 262 fantasy points, finishing as a QB2. This by way of just over 4,100 yards, 31 touchdowns, and 15 interceptions. However, he would have one of the better years of his career in 2021. He posted over 4,800 yards, 41 touchdowns, and 17 interceptions. Totaling 325 fantasy points, good enough for a top 5 finish. Beating our projection by 63 points! I expect him to have another solid top 10 finish in 2022 as well, so make sure he’s on your radar come draft season.

Moving over to his favorite target and triple crown winner Cooper Kupp. Coming into 2021, many argued over Robert Woods or Cooper Kupp as the primary option for Matt Stafford and this passing offense. Turns out the correct answer was Cooper Kupp. In August our team had him projected for 214 PPR points. However, he went out and took the NFL by storm, he caught 145 receptions on 191 targets, while producing 1,947 yards and 16 touchdowns. This totaled 437 PPR points, finishing as the best fantasy player on the season across all positions. I expect to see a repeat in 2022, most likely not to these historic levels but another WR1 finish is in his near future.

It’s becoming much harder to deny Cooper Kupp as MVP of the league in 2021/22. His importance to this team is without question! With this post season run he’s without a doubt having the best year that any WR has ever had! He’s the last one standing of the candidates #Kupp4MVP pic.twitter.com/mYoFuhHYki

Another player who stepped up in 2021 was Jonathan Taylor, many expected a second season jump but not to these proportions. He has become a focal point of the Colts’ offense, seeing 332 carries and 51 targets. He was able to produce over 2,000 all-purpose yards and score 20 touchdowns in 2021. These numbers helped him shatter our projection for him. He ended up finishing with 373 PPR points, over 100 more than our team projected.

Upon my review of the 2021 projections, I noticed our team did a great job predicting the 2021 season totals making this one hard to narrow down for me. However, a few stood out to me, Josh Allen being one of them. We had him projected for 392 points this season. This would end up being one of the closet projections we had. As he totaled over 4,400 passing yards, 36 passing touchdowns and paired these with 763 rushing yards and 6 rushing touchdowns. Landing him at the top of the quarterback position with 396 fantasy points. I expect this performance to continue, he has proven to be a true weapon at the quarterback position.

Another great projection by our team was on first-year running back Javonte Williams. We had him projected out for 195 PPR points. He went on to produce 924 rushing yards and 208 receiving yards while scoring 8 total touchdowns. Equalling out to 204 PPR points, beating our projection by only 9 points. Our standard scoring projection was even more impressive as we had him projected for 161.2 points, he totaled 161.9 standard points on the year! I expect him to see a large increase in 2022 so if possible I would get as many shares as possible.

JAVONTE WILLIAMS WILL NOT GO DOWN
pic.twitter.com/Dlk7ZMTZvC

Tyler Boyd was another player that I found in my review of our 2021 projections that we had projected very well. It was hard to decide what exactly JaMarr Chase would do to the targets and roles of the current wide receivers. However, our team had his point total within 10 points of his actual total. We had him finishing the season with 193 PPR points, totaling 870 yards on 82 receptions and scoring 4 touchdowns. He would go on to produce 828 yards on 67 targets while finding the end zone 5 times. Equaling out to 183 PPR points. This should be his new normal, JaMarr Chase and Tee Higgins are too good for his role to increase.

While reviewing the 2021 projections I found a few players who did not perform to our expectations. One of these was Miles Sanders, we had him projected for 225 PPR points. In 2021 he was only able to produce 115 PPR points on the season. His 754 yards on 137 carries were under our 1,000-yard projection, along with zero touchdowns. This was the most surprising fact, we had him scoring 7 times, for him to have zero was shocking. I expect this to be a forecast for the 2022 season as well, the Eagles are committed to a running back by committee.

The Eagles' offense has a lot of issues right now, but the lack of touches for Miles Sanders is just confusing. pic.twitter.com/X9XSiv9VWu

Another player I found who underachieved was Courtland Sutton. In our projections we had him producing 209 PPR points on the season.  Along with a 1,000 yard receiving year. He would fall short of both these marks in 2021. He took 58 receptions for 776 yards and 6 touchdowns. equaling out to 147 PPR points for 2021. These were disappointing numbers for many of the managers hoping for a bounce-back season. Until a quarterback change is made I don’t see things getting much better for Courtland Sutton. Expect a few more seasons of these types of numbers if the Broncos can not improve the position.

My last note on our 2021 projections is another player who underachieved. Matt Ryan had a down year without his top two receiving options. He threw for 3,968 yards which were 800 yards less than our projection, along with his 20 touchdowns which were 14 less than we projected. He finished the season with 220 points, well under our 320 points projected. Due to this, I think it’s safe to say that his career as a high-end fantasy option is over. He should go undrafted in most redraft leagues come fall 2022.