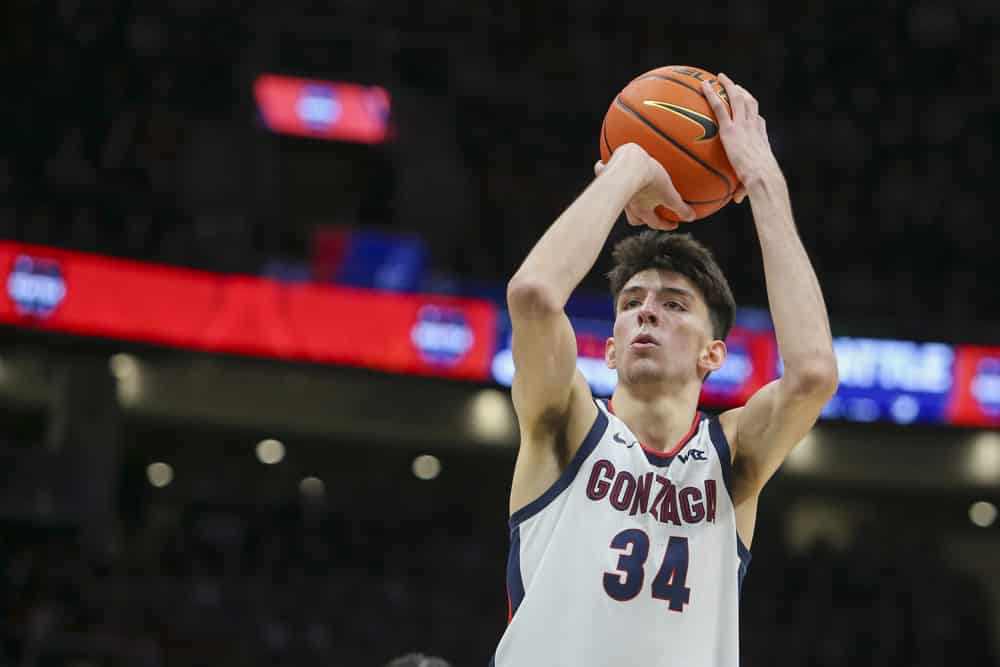 The calendars have flipped to February college basketball fans. That means most conferences only have about four to five more weeks of regular season basketball left. Expect the cream to begin to rise to the top. It’s also a perfect time to review some odds for teams to make the Final Four.

Let’s take a look at some possible favorites, some middle-of-road options, and a few longshots to make it to New Orleans.

The Zags enter February as the odds on favorite to advance to the Final Four and have a chance at avenging their championship game loss a season ago. It makes sense – Gonzaga has made it to two of the last five title games but lost both. A model of consistency and excellence, Mark Few has led his team to at least the Sweet 16 in six straight years.

A 17-2 record and convincing wins over the likes of UCLA, Texas, Texas Tech, and BYU have the Bulldogs as the #2 team in the country. Additionally, playing in the WCC probably guarantees at least a 7-1 record in their final eight regular-season games. At this point, Gonzaga securing a #1 seed and a relatively easy path to the Final Four is all but a done deal.

Detractors might point to a three-point loss to Duke or a nine-point loss to Alabama (both on neutral courts) but there aren’t any teams in the country that would run Gonzaga’s out of conference gauntlet and not lose a couple. They have a good blend of experience in F Drew Timme and G Andrew Nembhard and a future lottery pick in F Chet Holmgren. The Zags are KenPom’s 2nd best team in offensive efficiency and 18th in Adjusted D. While the odds aren’t the best, I don’t envision a scenario where Gonzaga isn’t in the Final Four.

It only seems fitting that Duke makes it to the Final Four in Coach K’s last season. However, compared to Gonzaga – the Blue Devils have a much harder road to lock up a #1 seed and they have a much younger team. Of the eight players who get regular minutes, five are underclassmen. The only seniors of note are Theo John and Joey Baker who get the 7th and 8th most minutes on the team.

Furthermore, Duke has only made the Final Four twice in the last 10 seasons. Of course, they also cut down the nets and won the whole thing both times. This year, Paolo Banchero is one of the best all-around players in the country, Mark Williams is a top shot blocker, and watch out for the emergence of AJ Griffin. If Duke can just get more consistent play from Wendell Moore they might be unstoppable.

Duke also registers as a top 15 team in KenPom’s Adjusted O and Adjusted D. Areas of concern are an average free throw percentage and a tendency to give up too many offensive rebounds. While Coach K has as good of a chance as anyone else to get to Nola, the odds may not be juicy enough. There are teams with more value who have just as much of a chance.

If it wasn’t for Kyle Guy’s 3 free throws with .6 seconds on the clock, Auburn would have played in the 2019 NCAA Championship game with a chance to win it all. That was a 10-loss Auburn squad that made a surprising run to the Final Four as a 5 seed. Entering this February as the #1 team in the nation, and with a 21-1 record, the Tigers are now a favorite to get a #1 seed and get to New Orleans.

It all starts with the frontcourt of Walker Kessler and potential #1 overall draft pick Jabari Smith. This duo is excellent on the defensive end of the court, proficient on the glass, and they’re only getting better offensively. Wendell Green Jr is a gritty, hard-nosed PG and the true leader of the team. Bruce Pearl has the roster and the coaching chops to take Auburn all the way this season.

UCLA’s odds of +425 are looking pretty juicy for a team that went to last year’s Final Four and basically returned everybody. Sure, there have been some injury issues and key players have missed games due to COVID but UCLA is still 16-3 with the dominant win over Arizona on their resume. Somehow it feels like the Bruins are flying under the radar as evident by the fact that there are nine teams with lower odds to get to the Final Four.

I love the value here on a team that maybe hasn’t hit its stride yet. This is a veteran squad with an all upperclassman starting five that’s destined to be playing their best ball come March. You probably remember the names from last year – Johnny Juzang, Jaime Jaquez, Tyger Campbell, and others. Some of these guys may not be sure-fire NBA players but they’re excellent on the college level.

Additionally, don’t forget that UCLA had to beat Michigan State in the “First Four” last year to have the privilege of making it to the 1st round. Unlike the rest of last year’s Final Four, UCLA had to win five games to get there. It’ll be an easier route this year as a high seed with one less win required. If I’m filling out a bracket in early February, I’ll have Mick Cronin’s squad advancing far.

Nobody was talking about the Red Raiders to begin the season. It appeared there would be a rebuilding process after losing their head coach and several key players. Tech hit the transfer market hard but mostly brought in guys from small schools like Oral Roberts, Winthrop, Utep, and Hampton to mix with returners Kevin McCullar and Terrence Shannon.

It’s an unheralded group of players and while they can struggle offensively at times, the Red Raiders have the 4th best defense in the country. They already have wins over Kansas, Baylor, Texas, and others on their resume. However, Texas Tech is bad at 3pt shooting (227th), free-throw shooting (254th), and turning the ball over (239th).

Usually, those stats indicate an early postseason exit but I love this team’s toughness. It will take the right path and some brakes along the way but at +650, the Red Raiders deserve real consideration. Don’t forget – the transfer that came over from Oral Roberts was Kevin Obanor who made a name for himself in last year’s tourney averaging 23 PPG and 11 RPG on their remarkable run to the Sweet 16.

So this year – why not Miami? The Canes are currently sitting atop the ACC with wins over Duke and UNC already under their belt. Their two conference losses were by one point and both at the hands of Florida State. The U might not have much of a post presence but we love guard play come March and Miami has an excellent perimeter. Charlie Moore is a 6th yr SR, Kameron McGusty is a 5th yr SR and this is Isaiah Wong’s 3rd year in South Florida. Additionally, coach Jim Larranaga took George Mason to a Final Four back in 2006.

The Golden Eagles are now 8-1 in their last nine Big East games which include a sweep of Villanova and Seton Hall. Shaka Smart has done an outstanding job in his first year in Milwaukee with a team that was projected towards the bottom of the league. In his sophomore season, F Justin Lewis has emerged as one of the best players in the country, and transfers Tyler Kolek and Darryl Morsell have solidified the backcourt.

Marquette is finally nationally ranked and currently projected as a 4 seed in Lunardi’s bracketology. The Golden Eagles have a top 25 defense in the country and the offense is improving as the season is progressing. Make no mistake – this team could surprise some folks come March.

The MWC may be flying under the national radar this season but the conference could potentially sneak four teams into the big dance. Although Boise’s 14 game win streak was recently snapped at Wyoming, the Broncos still have a ½ game lead in the conference standings and should be firmly entrenched as an at-large if they don’t earn the MWC auto bid.

There have been a few NIT appearances over the last five seasons but 2015 was the last time Boise made the NCAA’s. This year, the Broncos have a very experienced team with 6 of their top 7 players being seniors and a few are of the redshirt variety. It’s a grown-man team with the 7th best defense in the nation. Look out for the trio of Marcus Shaver Jr, Abu Kigab, and Emmanual Akot to make some noise this postseason.