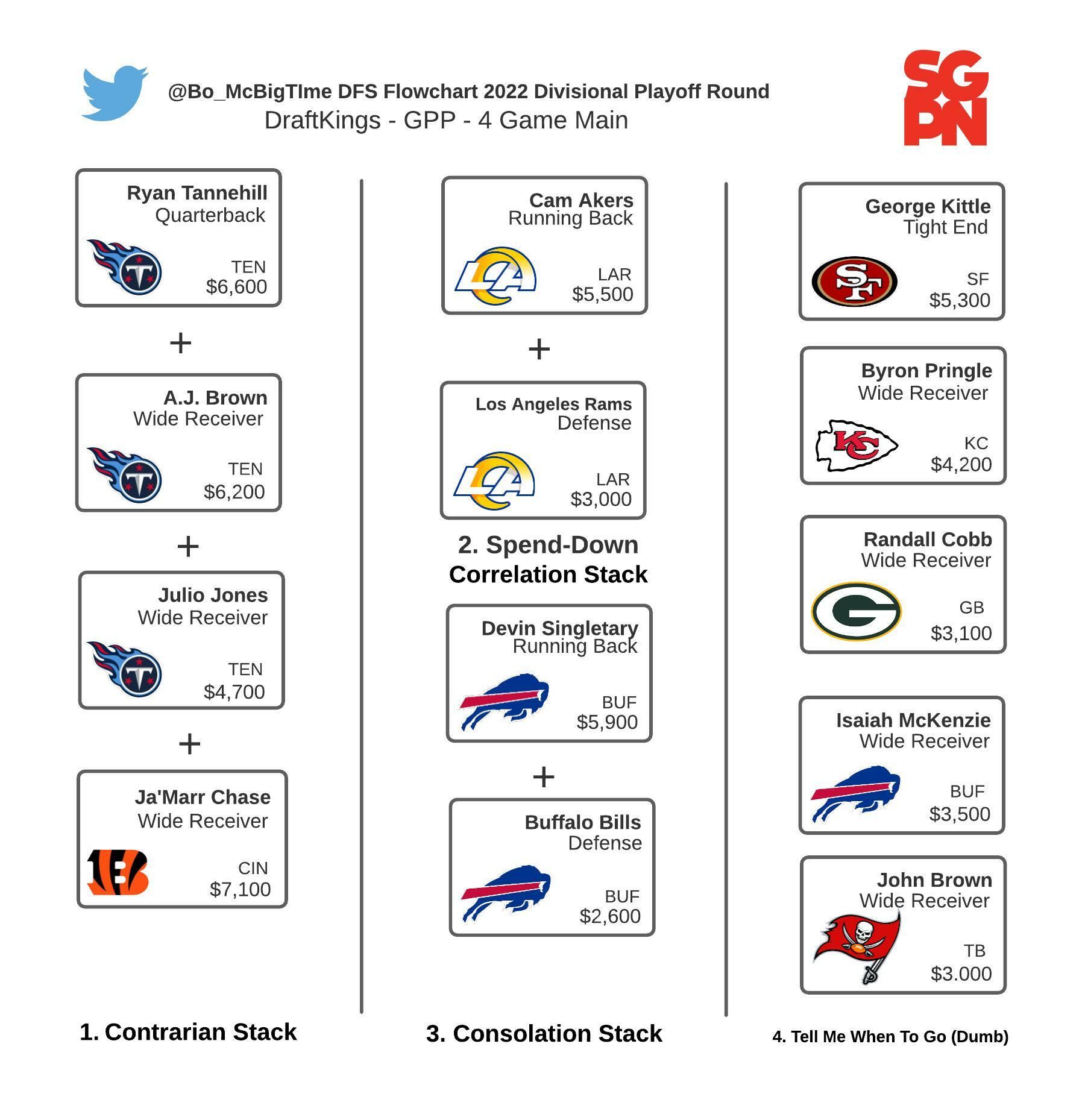 Try to keep your voice down. The blackout curtains are still drawn and my sleeves are stained from a lukewarm bath of tears. I hedged my emotions to brace for the annual Cowboys letdown, but the poison-tipped arrow still pierced my sunken heart. Dak Prescott looked like Jalen Hurts out there, struggling through an otherwise nice fantasy performance. The big DFS winners chose Josh Allen or Patrick Mahomes at quarterback in the Wild Card round, but I still managed to cash in on Gronk, Deebo, Zay, and Pringle.

The Divisional round will be a sight to behold, sporting matchups with scintillating storylines. The talking heads will sing a song of legacy-defining performances by the usual suspects. I will play DFS in search of the unsung blue-collar player that pens his own fairytale. The name of the game this weekend is leverage. When the field zigs, we zag. When everyone says the sky is blue, we say “not when it’s overcast.” The best DFS players thrive on chaos. The chalk might hit, but we hit harder. When I hear the word ‘leverage,’ I imagine the cowcatcher on the front of a steam locomotive. There is a bounty of beef on the tracks this week, but we will be burning up the coal to reach the A5 Wagyu at our DFS terminus.

Chasing points is tired. Following trends is wired. The consensus favorites are fine and dandy for cash games, but I’m about to risk it all on this slate and hit her with my best pickup line. It’s like the episode of Seinfeld, when George was tired of lying to women and having it blow up in his face every time. He decided to do the complete opposite of his modus operandi. He was brutally honest, even admitting that he was unemployed and living with his parents in Queens to lead off on a first date. It worked! His bluntness to reveal every red flag in the book was endearing to his dates.

When we pivot to an opposing narrative to the consensus, we open up a world of possibilities for when the prophecies inevitably blow up in everyone’s faces. We are supposed to be worried about Ryan Tannehill‘s production against the Bengals, especially with the potential return of Derrick Henry. I say, “Perfect.” It isn’t hip to play running backs against the Buccaneers. Watch me. I march to the beat of a different drum. You can march with me, against the grain. If the chalk hits, we’re toast. If it doesn’t, we will stand atop the tallest mountain in Valhalla!

The cynic in me wants to believe that Burrow and the boys won’t pull as much ownership as Josh Allen, Patrick Mahomes, or Aaron Rodgers this week. Realistically, his salary falling $500-1,000 less than those guys means he will be somewhat popular against a bad Titans secondary. It’s a bit strange to call Matthew Stafford a spend-down option, but he’s a gorgeous one this week at $6,200 against Tampa Bay. Pairing him with Kupp makes a lot of sense, especially on the heels of the star receiver’s most modest performance of the season.

The contrarian stack that has me seeing dollar signs, however, is a Ryan Tannehill stack with both AJ Brown and Julio Jones. Everyone knows the King’s return is imminent. Using the Titans passing game makes a lot of sense this week. It flies in the face of the overwhelming narrative that Tennessee will run the ball heavily against Cincinnati. It also opens the door to the potential spike in passing volume should the Bengals jump out to an early lead. The cherry on top with this stack is Ja’Marr Chase. His upside is absolutely insane this week. If we’re swallowing chalk, I’ll take it in generational rookie form as a run-back.

You Can’t Do That!

Oh, yes I can. That screeching sound you hear is emanating from those who still believe in the immortality of Tampa Bay’s run defense. Through clenched fists and bulging forehead veins, they shudder at the thought of rostering a running back against the vaunted Bucs. It’s funny. Tampa Bay is only 16th at defending the running back position. The first dent in the armor came in a Week 7 romp over the rudderless Bears. Late-round rookie Khalil Herbert rushed for over 100 yards that game. It was literally a Hokie Pokey. From that point, there was tape to prove it was possible. Even the god damn Jets ran the ball on the Bucs, but augmented that with a flurry of passing targets for their backs.

The Cam Akers story is remarkable. His 18 touches last week came fewer than six months after the gavel dropped on a running back death sentence. He looked as if August never happened. His agility and burst were there in spades. The blueprint is there for a back like Akers to explode against the defending champs. Cam is a $5,500 powder keg for DFS. Pair him with the Rams DST for a nice contrarian, spend-down, correlation play.

If you rightly fear the wrath of the GOAT this week, I’ll offer you a consolation stack. You might surmise that the key to Buffalo advancing over the mighty Chiefs falls on Josh Allen’s country-sized shoulders. Truthfully, our new favorite bell cow is the answer. Devin Singletary ($5,900) isn’t an imposing figure like Allen, but his role in this offense surely is. Stacking him with a Bills DST ($2,600) that scored 17 DK points against the Chiefs in Week 5 is a spicy recipe to clear your sinuses (and the vault).

Tell Me When To Go (Dumb)

I had to toss in an E-40 reference (shoutout NorCal). Speaking of the Bay Area, we are all rightfully enamored with Sexy Flexy, Deebo Samuel. He’s on quite a roll, but his $500 price reduction from last week is a bad thing (?). Rostering Deebo this weekend will be chalkier than chewing an entire bottle of Benadryl next to LeBron doing his pregame ritual. Even Simone Biles wouldn’t use this much chalk to prep for the uneven bars. Instead, dial up the all-or-nothing George Kittle ($5,300). He won’t draw Jaire Alexander at all, leaving him free to prance around all afternoon in soft coverage. He will be so open that even Jimmy Garoppolo will find him. He’s also not Kelce or Gronk, whose depressed salaries will entice many to spend up to the top.

Once you’ve been institutionalized, you might as well find some crayons to eat when you’re done doodling. Guys like Byron Pringle ($4,200) and Randall Cobb ($3,100) are great values for their respective ceilings. You might also want to order a round of shots and get turnt up on Isaiah McKenzie ($3,500) or my guy Smoke Brown ($3,000) if he’s activated for the Bucs.

Once again, I wish you all the best of luck this week. NFL DFS is my crutch and my curse. Thanks for reading!