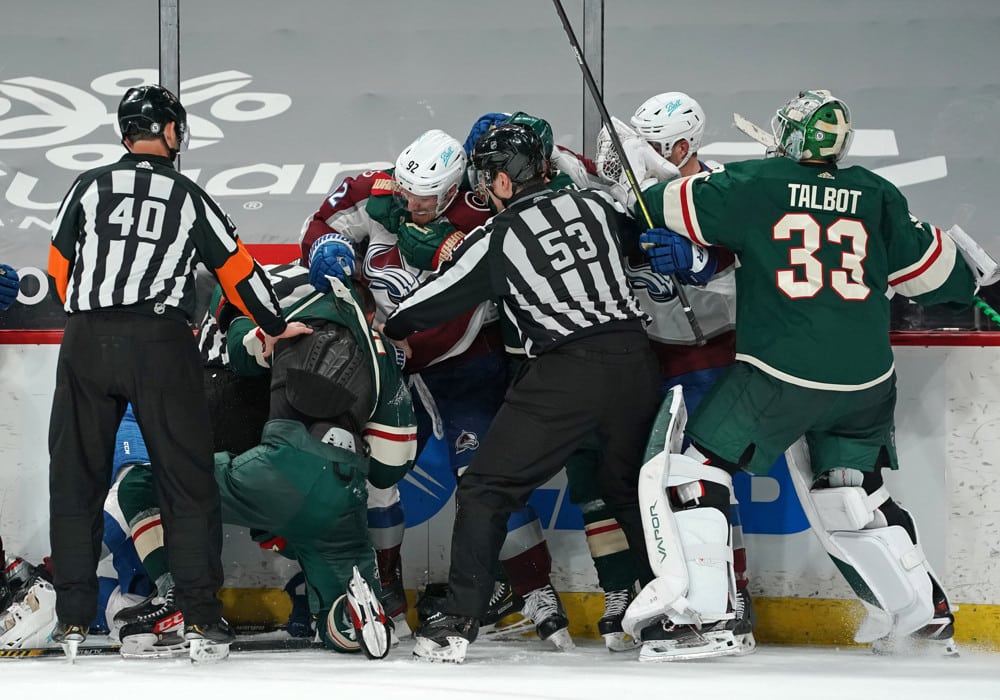 Monday brings us a busy slate of NHL games all day long. Martin Luther King Jr. Day sees puck drops between 1:00 and 10:00 p.m. ET. There are nearly 12 straight hours of hockey spanning from this afternoon into the late night. I’m going to go through all eight games with my leans, picks, and best bets for each game.

The Red Wings and Sabres get the slate kicked off with a Monday matinee. These two teams faced off on Saturday night in Detroit with the Red Wings shutting out the Sabres 4-0. This is actually the fourth matchup this season in total. Detroit won 4-3 in overtime in Buffalo, 3-2 in overtime at home, and then that 4-0 win on Saturday. I’m sensing a similar outcome in Buffalo.

The Sabres started off the season stronger than expected but are now back down in the dumps. They’re 1-5-1 since the holiday break and have been outscored 26-14 in those seven games. Their lone win was a bit of a fluke against Nashville when they got outshot 30-21 but won 4-1.

The Red Wings aren’t necessarily getting the results they deserve recently. They outshot their opponent in three of the last four games but only have one win to show for it.

Detroit won all three meetings so far this season and they were deserved outcomes. The Wings outshot the Sabres 39-22 in the 4-0 win, 41-28 in the 3-2 overtime win, and the overtime winner was the difference in the game in Buffalo as the shot totals were 33-32.

The Wild have covered eight of 11 games as +1.5 underdogs and the Avs are just 17-15 on the -1.5 spread. On top of that, Colorado has had a lot of one-goal wins recently against Arizona, Seattle, Toronto, and Chicago since the break –– that’s four of seven wins by one goal. Minnesota should be able to keep it close as Arizona did.

As far as the Over is concerned, the Avalanche have scored four or more goals themselves in all seven games since the break. They’ve had six of their last seven games go Over 6.5 goals. The Wild can score goals as well as shown by their 7-3 win last time out.

Woof. This game is one to probably pass on, but let’s take a look anyway. I’m looking at Arizona at home and the Under 5.5 here.

The Coyotes just showed that they can keep up with a good team in the Avalanche and have the home-ice advantage over Montreal. Arizona is 4-13-1 at home while Montreal is just 2-14-4 on the road. That’s right, Montreal has two wins in 20 games on the road. On that basis alone, I like Arizona.

Arizona has two wins since the break. They beat Chicago 6-4 and Toronto 2-1 –– both at home. Montreal hasn’t won since the break and has been outshot rather heavily in its last five games.

For the total, these are the two lowest-scoring teams in the league. This could easily be a 2-1 or 3-2 game. Possibly look at betting on the game to go to overtime.

I love the Kings in this spot, especially at -115.

The Kings have been one of the best teams in the NHL since the holiday break. They’re 6-2-0 in their last eight and riding a four-game win streak. That includes a 6-2 win against the Penguins and a 3-1 win against the Rangers.

The Sharks, on the other hand, have been up-and-down since the break. They won two, lost two, won three, and have now lost two straight. Those last two losses were against the aforementioned Rangers and Penguins, who the Kings handled with ease.

San Jose does have home-ice advantage, but it’s only .500 at home this season (10-8-2). The Kings are playing great hockey and should be bigger favorites here.

For the total, I’m picking the Under. The Kings have held their opponent to two goals or fewer in four straight games. The Sharks have scored just one goal in their last two games.

This is another game between two not-so-great teams. Seattle and Chicago are both in the bottom 10 in the league. On top of that, the Kraken haven’t won a game in over a month.

The Blackhawks are playing well recently, however, and the -110 odds seem very short. Chicago has won four straight games, including an upset win in Vegas, and are coming off a shutout win against the Ducks. Marc-Andre Fleury has allowed just five goals (118 saves on 123 shots) with one shutout during the four-game win streak.

Chicago beat the Kraken in Seattle by a final score of 4-2 on November 17th, so they’ve proven they can win this matchup on the road.

I like the Under in this game as well but would be more comfortable with it at 6 instead of 5.5. I’m still making it a “pick” rather than a “lean” given Chicago’s strong play recently and Seattle’s lackluster offense.

A Metropolitan Division matchup between two underachieving teams kicks off the “night” slate.

The Flyers have lost seven straight games after losing 10 straight earlier this season. They haven’t won a game in regulation in over a month. However, they had two good showings that resulted in 3-2 losses in Boston and at home against the Rangers to end last week.

The Islanders are starting to find themselves. They’re 3-1-0 since the break with the lone loss coming on Friday against Washington. They previously beat New Jersey, Edmonton, and Buffalo.

New York won the last five meetings last season and that should continue on Monday night. Their last four meetings all went past regulation and Under 5.5 goals.

Finally, a matchup between two good teams with odds that reflect that. Minnesota vs. Colorado is a good game as well, but the Avalanche are clearly the favorites. This should be another great Central Division showdown.

The Predators lost their first two games after the break but then rattled off five straight victories, ending with a 5-4 win against the Avalanche. However, they’ve slowed down in their past two with a huge upset loss to the Sabres as -340 favorites and an overtime loss in Boston.

The Blues have won five of seven games since the break and are coming off a tough 6-5 loss to Toronto without some key players. Most of those players are expected to return for Monday and that should show up on the scoreboard.

St. Louis is the better team and has home-ice advantage (15-4-2 this season) over Nashville (13-6-3 on the road). The Blues are also playing better recently, so this -130 line seems like a steal to me.

I lean to the Under 6, but not strong enough to make it anything more than that. This should be a goalie game between Juuse Saros and Jordan Binnington.

The nightcap for Monday’s slate may just be the best game of the night on paper, but recent form appears to give the edge to Pittsburgh.

The Penguins are nearly fully healthy and have won five of seven games since the break.

On the other hand, the Golden Knights are battling various injuries to Max Pacioretty, Alec Martinez, Shea Theodore, and Nicolas Roy, among others. This has shown on the scoreboard recently with back-to-back losses and just one win in their last five games.

However, Vegas isn’t necessarily playing poorly. They have the third-best Expected Goals For Percentage (58.41%) at 5-on-5 play since the break. Pittsburgh is up there as well with the 10th-best at 52.73%. Robin Lehner is back after missing some time and the Golden Knights are coming off a tough-luck loss to Toronto. They outshot the Leafs 34-18 but fell in a shootout. In the game before that, Vegas outshot Chicago 31-21 but lost 2-1.

It’s rare that you’ll get Vegas at home as only slight favorites, so I have to take it –– even against Pittsburgh. The total is a complete toss-up for me, but I’ll take the over in the last game of the night. Vegas may finally break through after several games of bad luck.