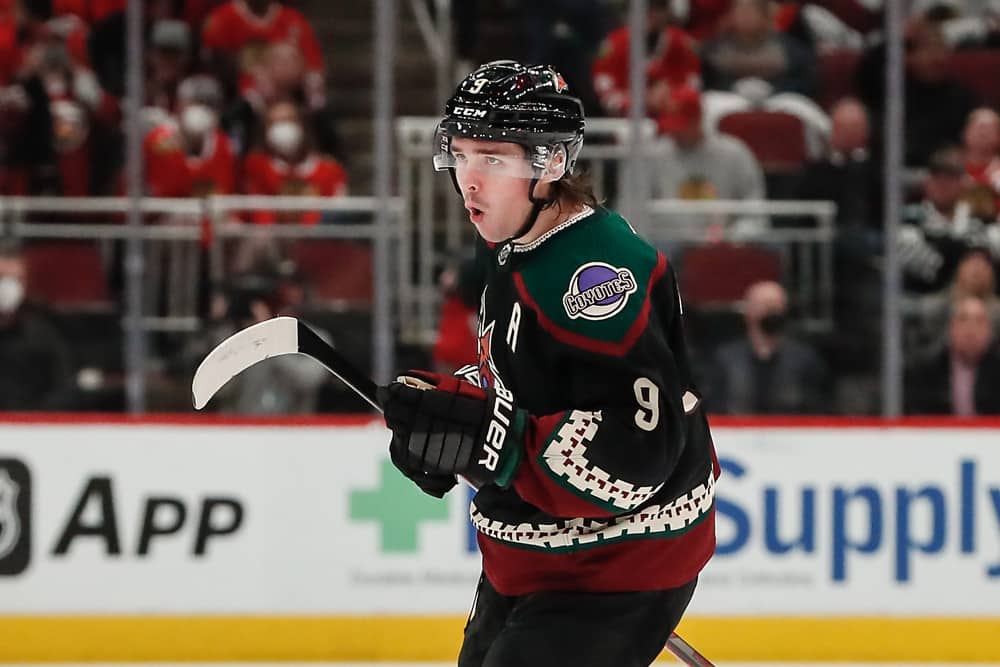 It’s a busy week in the NHL and that means a big week for fantasy hockey! There are 11 games on Saturday, nine on Thursday, and eight on Monday, Tuesday, and Friday this week. The main “light days” to focus on are Wednesday (three games) and Sunday (five games). However, those eight-game nights are worth a look as well. As a result of so many games, over a dozen teams are playing four games this week. There are plenty of teams to stream and waiver wire claims to be made. Make the most of waivers to win your matchup this week!

Rather than trying to look at one player from all 13 teams playing four times in Week 14, we’re going to focus on the teams playing three times on those lighter days. For streaming options, we’re using Yahoo! rostered percentages and primarily looking at players available in over 50% of leagues.

Here are the six teams to stream this week. They’re all playing four times and thrice on light nights.

Monday vs. Montreal
Wednesday at New Jersey
Friday at Islanders
Saturday at Rangers

Arizona is one of the worst teams in the league but recently beat Toronto and took Colorado to overtime. They don’t have many fantasy hockey studs, but they’re worth streaming this week.

Everyone remembers Gostisbehere’s great rookie year with the Flyers and he’s having a chance to put up points in Arizona this season. Gostisbehere is a great fantasy hockey player because you get all the offense and points without the negative defensive play.

The defenseman plays on the top power-play unit and has 24 points (seven goals, 17 assists) and 75 shots on goal in 36 games this season. Hell, Gostisbehere might be someone to hang onto in hopes of him getting traded to a contender at the deadline.

Keller is a player that should be owned in more leagues. He has 27 points (13 goals, 14 assists) and 103 shots on goal in 36 games this season. Keller has four goals and one assist for five points in seven games since the holiday break.

Vejmelka is the Coyotes starting goalie but is available in over 90% of Yahoo! leagues. I get it, the Coyotes are terrible, but Vejmelka has shown he can steal a win and racks up saves nearly every time out. He had 45 saves in the win over Toronto and 46 saves against Winnipeg earlier in 2022.

The Panthers are red-hot right now after scoring nine and seven goals in their last two games. Most of their players are rostered in most leagues, but there are some players worth streaming.

Go pick up Verhaeghe right now if he’s available in your league. He’s playing on the top line and scored three goals in the last two games. In fact, he had goals in nine games since the break. On top of that, he has 29 shots to go with the six goals. Verhaeghe is getting the opportunity and making the most of it.

Hornqvist plays in Florida’s bottom-six but gets time on the second power-play unit. He’s made the most of his ice time recently with three goals and two assists in his last four games. He also shoots the puck a bunch as well with 95 shots on goal in 36 games this season.

Lundell is the go-to Panther in deeper leagues. The 20-year-old Finnish forward has 23 points (nine goals, 14 assists) in 34 games and is currently lined up on Florida’s third line. He is also on the second power-play unit with Hornqvist. Lundell has been on fire since the break with four goals and seven assists for 11 points in nine games.

Knight will likely get a start in Edmonton or Vancouver this weekend. He’s struggled a bit this season with a 7-4-2 record, 3.39 GAA and .896 SV%. However, the Panthers should be favored in both of those games and Knight should be able to pick up the win.

The Kings are one of the best teams since the break and plenty of their players are available in most leagues. Let’s get right to it.

Arvidsson has 22 points (9 goals, 13 assists) and 111 shots in 31 games this season. He plays in the top six and could move up to the top line with Adrian Kempe in COVID protocol. Arvidsson is already on the top power-play unit.

The Swedish forward has nearly been as hot as the Kings. He has three goals and five assists for eight points in his last six games. Oh yeah, he has 21 shots as well. Go pick up Arvidsson for this busy week.

Iafallo is on the top line with Anze Kopitar –– and top power-play unit –– and has 23 points (10 goals, 13 assists) in 36 games this season. He has points in back-to-back games with three assists over the last two contests. Iafallo consistently plays nearly 20 minutes a night and will have his chances this week.

Petersen made 17 saves on 18 shots in a relatively easy win in Seattle on Saturday night. Things may not be as easy this week with a potential start against Tampa Bay on Tuesday if the Kings go with Jonathan Quick on Monday.

Still, Petersen has won three straight starts with just two goals allowed since the break. They may not be favored, but I wouldn’t put it past the Kings to keep up their winning ways.

The Islanders aren’t the typical high-flying team you want to target in fantasy hockey but they have a busy schedule this week.

The Islanders captain is on the top line and power-play unit with Mathew Barzal. He has 10 goals but only two assists in 25 games this season. He’s still firing the puck a bit with 61 shots this season.

Lee is a streaky player and could see success against the weak Flyers defense early this week. He has picked it up over the past month or so with six goals and two assists in his last 10 games.

On the defensive side of things, we’re going to look at Dobson. The young defenseman has four points (two goals, two assists) in four games since the break. He also has nine goals, six hits, and eight blocked shots since play resumed. He’s not going to light the world on fire, but Dobson is worth a look in a busy week.

Varlamov should get one of the starts against the Flyers and the Islanders should have a decent chance in that game. The Russian netminder is 2-6-1 with a 2.59 GAA and .917 SV% this season.

Monday at Vegas
Thursday vs. Ottawa
Friday at Columbus
Sunday vs. Winnipeg

The Penguins are getting healthy and that’s a scary thing. They also have an easy back-to-back this week against Ottawa and Columbus.

Carter was viewed by some as the odd man out when the Penguins got healthy but this is your chance to snag him. He should still be playing on the second line or third line at the very worst with time on the second power-play unit.

The veteran forward has 20 points (11 goals, 9 assists) and 100 shots on goal in 31 games this season. He’s played in four games since the break with two goals, one assist, and 13 shots on goal. He also had seven hits and three blocked shots if those stats count in your league.

Kapanen has been keeping the second-line wing warm in Bryan Rust‘s absence and could see a decrease in ice time. However, he has 20 points in 36 games this season including four points in six games since the break. He’s a guy to look at in deeper leagues.

DeSmith is in COVID protocol but could clear before he’s needed on Thursday or Friday. Otherwise, go for Domingue.

Last, and quite possibly least, are the Seattle Kraken. They play four times this week at home, where they are much better than on the road.

We’re going back to the Giordano well here, but he’s not my main Kraken to target. Giordano can provide defensive depth with 12 points (four goals, eight assists) and 61 shots in 31 games this season.

McCann is finding his game recently with the Kraken. He’s closing in on the team lead in points with 23 and already has the most goals with 15. He also leads Seattle with 86 shots in 32 games.

This is another player that has picked it up since the holiday break. In seven games he has three goals, three assists,  and 24 shots on goal. McCann centers the top line and top power-play unit.

Driedger is also in COVID protocol and it may be iffy for him to clear by the back-to-back set. If he does, he’s worth a look. He held the Blues and Kings to two goals each in Seattle’s last two games.

Despite the busy week, some teams are only playing two games. You’re going to want to avoid streaming players from these teams.